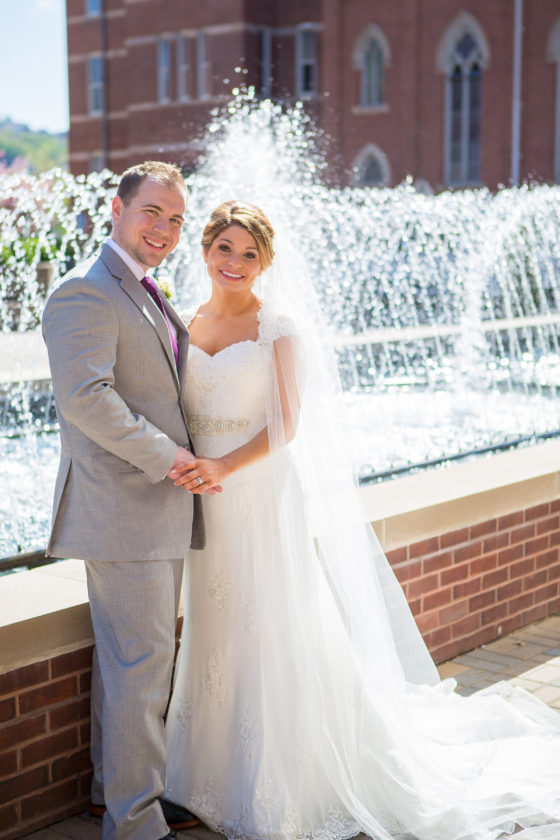 STEUBENVILLE — Kristen Pizzoferrato and James Merritt were united in marriage on April 23 at the Chapel of the Holy Spirit at Duquesne University, Pittsburgh. The Rev. Jack McCoy united the couple in marriage.

The bride is the daughter of Richard and Lisa Pizzoferrato of Steubenville. The groom is the son of James and Janet Merritt of Centreville, Va.

The bride, escorted to the altar by her father and given in marriage by her parents, wore a chiffon and embroidered lace, fit-and-flare gown, which featured a Queen Anne neckline and delicate floating appliques throughout the skirt. The gown featured an illusion back and chapel length train. She carried a bouquet of white calla lilies with eucalyptus.

Haley French, niece of the bride, was flower girl.

A reception followed at Pittsburgh’s Grand Hall at the Priory.

The bride is a 2006 graduate of Catholic Central High School and a 2011 graduate of Duquesne University  with a master’s degree in speech language pathology. She is employed by Genesis Rehabilitation Services in Northern Virginia.

The groom is a 2004 graduate of Westfield High School and a 2009 graduate of George Mason University with a bachelor’s degree in communications. He is employed by CACI as a government contractor in Chantilly, Va.

The couple honeymooned in Europe and reside in Falls Church, Va.