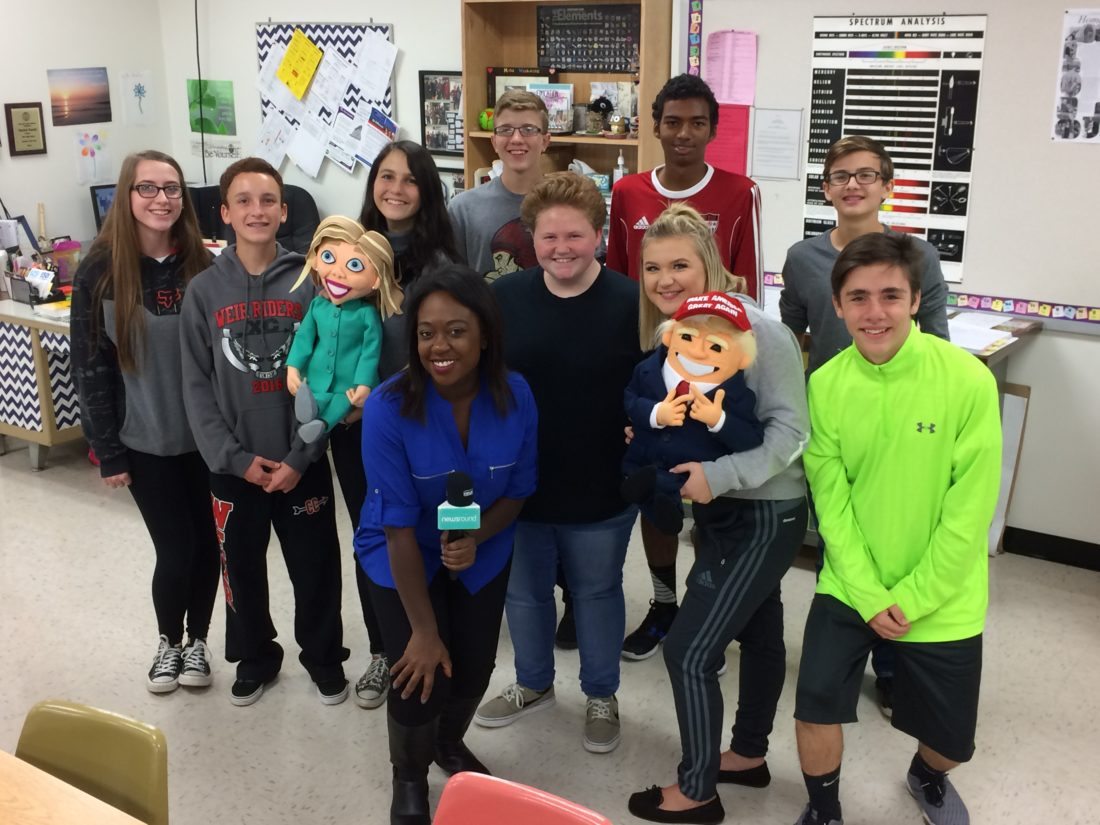 WEIRTON — Several members of Donna Ferguson’s Weir High School freshmen history class has an opportunity to discuss their thoughts on the upcoming election with a team from BBC’s Newsround, a new program targeted to young people 15 and younger.

“They felt we fit the bill,” Bissett said. “They came to us and chose us.”

Bissett was impressed by the students well thought out opinions and how eloquently they were able to express them. She said the school community was excited to host the crew.

“They explained that they were interested in an American perspective of the election,” Ferguson said. “They wanted to know what young high schoolers think.”

People in other countries are paying attention to the American election and want to know what ordinary Americans think about it, Ferguson said. She praised the work of the BBC crew and said the students impressed them with their knowledge of the issues and passion about the subject.

The students participating include Boston Beatty, Emily Budik, Mason Cassels, Brooke McMillan, Savanah Shea, Gabriella Soplinski, Jesse Tustin, Chase Wills and Spencer Vida. The students were chosen for a depth of knowledge about the issues that will face the next president and their interest and engagement in classroom discussions.

“We were actually discussing (the election) before they called, so it was perfect,” Ferguson said.

Ferguson and her classes discussed different concerns the students had about political issues and what issues they felt were important and needed to be addressed.

“They really got into it and we had some great discussions,” she said, noting that it was important to discuss the issues, not the candidate and to let the students lead the discussion and not influence them. “I don’t determine the direction (of the conversation), just give them factual information (about issues). We began by asking what the biggest problems facing our country were, and we had input from the entire class.”

The classes listed the different issues they felt strongly about and educated themselves about them, Ferguson said. The classes would break up into small groups and discuss their top issues.

As part of the segment, the crew spoke to the students both one-on-one and in a group, also surprising them with dolls in the likeness of presidential candidates Hillary Clinton and Donald Trump to see the young people’s reactions.

“They were looking for students who had an interest (in the election),” she said. “I was so impressed with how (the students) responded.”

They also visited the home of student Spencer Vida for a “day in the life” of an average American teenager, filming at his home and interviewing his family. The crew also filmed the exterior and toured the school with Bissett.

The segment will air in England before the Nov. 8 election, and Weir High officials will be given a link so they can share it with the school community.

“It’s a great opportunity for the students,” Ferguson said. “We’re extremely excited and can’t wait to see it.”

The BBC crew also attended the Weir-East Liverpool High School football game. It was considered a novelty, since high school-level sports don’t hold the same importance in England as they do in America.