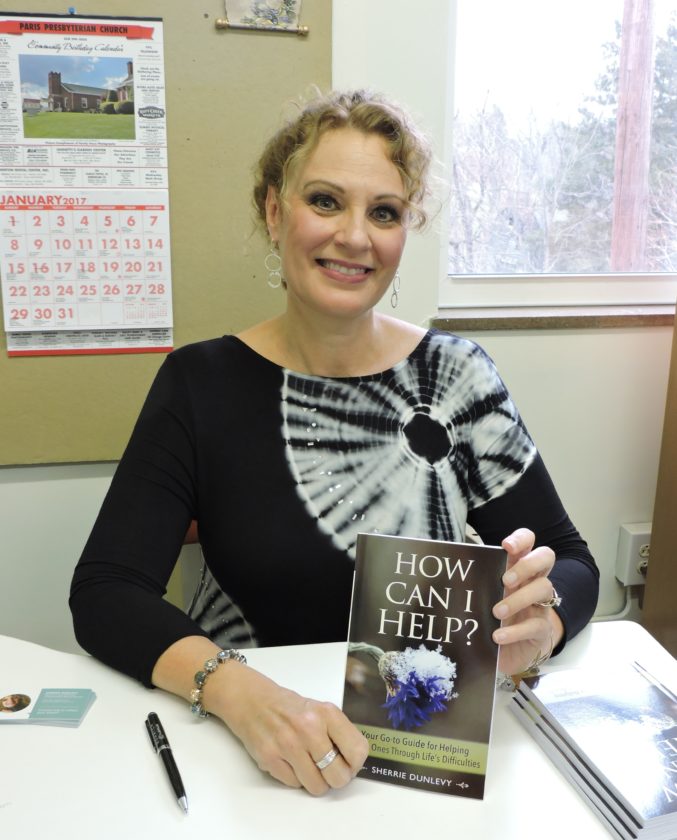 FIRST BOOK — Sherrie Dunlevy made her first outing as an author with “Can I Help? Your Go-To Guide for Helping Loved Ones Through Life’s Difficulties” at a Coffee With the Author event at The Gathering Place Coffee Shop. -- Summer Wallace-Minger

PARIS — Sherrie Dunlevy believes her son Brandon had a mission to accomplish.

Dunlevy’s son was born in 1999 with a diaphragmatic hernia and lived 29 days.

“At the time, I was living a very public life as Sherrie McCutcheon,” Dunlevy, who is best known to area residents as a news broadcaster, said. “And I was terrified as Sherrie Dunlevy.”

Dunlevy knew before her child was born he would be ill, and she knew her audience, who watched her grow up through her first broadcast job out of college, her marriage and the birth of her first child, Trey, felt a sense of kinship with her — and was aware of her pregnancy.

“I had a camera following me everywhere I went,” Dunlevy said. “It was my first job right out of college. There were cameras at my wedding and right after I had my first child.”

As a newborn, Dunlevy’s son was placed on a heart and lung machine in the Newborn Intensive Care Unit at Pittsburgh Children’s Hospital. He had surgery and blinders were placed over his eyes and mufflers over his ears. Dunlevy couldn’t hold him because of his heightened sensitivity.

“One of the hardest things I had to do was leave my son and go home and throw a party for my 3-year-old,” she said.

“I was on maternity leave, and I had no baby,” Dunlevy said. “Work was my comfort zone, so I went back to work, but I don’t remember a lot of the next year. The one thing I can remember is who was there and who wasn’t.”

Dunlevy spoke about a couple, the parents of one of her co-workers, who waved to her every day as she passed on her way to the television station. They sent a card each week during her absence with the simple message “we miss you.” Simple gestures of love helped Dunlevy cope with her grief, she said.

Encountering the audience who had followed her pregnancy with Brandon became newly painful.

“I didn’t want to go out, not because I didn’t want to talk about him, but because people would come up and ask me about the baby and I would have to ruin their day by telling them,” Dunlevy said.

However, Dunlevy found the withdrawal of some of her friends the most painful.

“Some people are just paralyzed, they are afraid to say or do the wrong thing,” she said. “All I know is that, when I was shown love, I felt it. And if it was awkward, that was OK.”

Dunlevy had a “spirit strike,” or inspiration to write a book that would give people advice about what to do when a friend or loved one experienced a tragedy. In writing it, she drew on her own experience, but also reached out to those who also lost family members, experienced divorce or a drastic downturn in finances or had been diagnosed with a serious or terminal illness.

“The number one thing people found most helpful was prayer,” Dunlevy said. “Some people said it was palpable — they could feel an energy. Things that aren’t as helpful is asking ‘is there anything I can do for you?’ Guess what? They aren’t going to tell you, because they don’t know.”

Dunlevy said she hoped people would read the book and incorporate the advice that resonated with them.

“Be there,” she said. “Let them know you’re loving them. Create a loving message and leave it on their machine or phone — ‘I’m thinking about you,’ ‘I’m praying for you,’ ‘I love you’ — so, even if they don’t feel like talking to anyone, they can push a button and hear it. You can’t say or do the wrong thing if you’re doing something out of love.”

The fear of saying or doing the wrong thing can evolve into embarrassment over not having contacted a grieving friend or loved one, then the relationship can wither for lack of contact. Dunlevy experienced this fear after her niece’s mother died unexpectedly around the same time her father was diagnosed with lung cancer and a friend’s child was diagnosed with a chronic illness.

“I wanted to run away,” she said. “Then I thought, ‘Sherrie, you wrote the book!’ My niece just needed me to give her a hug and tell her we loved her and we were there for her. My dad was still my dad and he needed his daughter. And my friend just needed someone to talk to. All I needed to do was show up and show love. I had to step out of fear and step into love.”

The book doesn’t have step-by-step instructions, but tips and suggestions. It can be read cover-to-cover or by pertinent section, whether it is death, divorce or illness. Dunlevy’s email address is included, so those who have stories about what helped them through their own grief can share them.

“I didn’t want to be defined as a woman who lost her child,” Dunlevy said. “But I want him to be remembered.

“My son’s life lasted 29 days, and I feel like he had an agreement with God to do his best while he was here. He had blinders over his eyes, and cotton in his ears, and he wasn’t wearing any clothes, because of how sensitive he was.

“But that tiny baby brought more people to God on their knees in prayer than I ever had. I feel his mission was accomplished. He speaks though me so he can help others, so I can remember my son in a positive way and to remind us to love one another, be kind and be there for one another.”

Dunlevy’s book is available on Amazon.com.

BEIJING (AP) — Antagonisms between the United States and China are rattling governments around the world, ...

WASHINGTON (AP) — Negotiations launched, the differences over the next coronavirus aid package are vast, a gulf ...

CHARLESTON — Campus life for students, professors and staff at West Virginia University will be different in the ...

NEW CUMBERLAND — The Hancock County Board of Education is purchasing 3,000 iPads as part of its plans for the ... 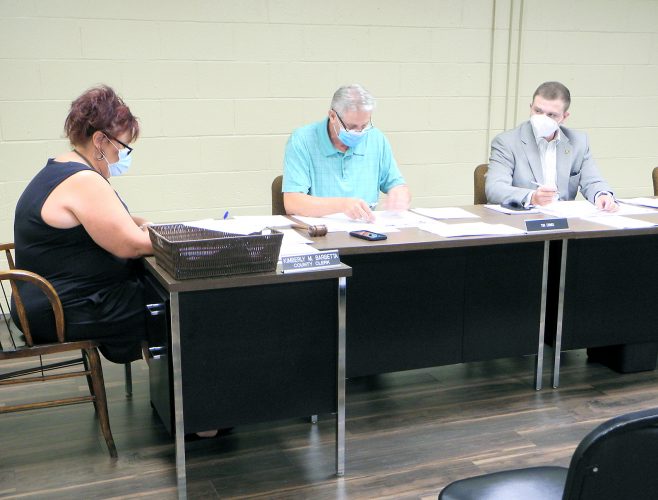 WHEELING — The Wheeling Area Chamber of Commerce is continuing with plans to welcome Santa and the Christmas ...

Series topic to be ‘The Role of Mental Illness in Addiction’