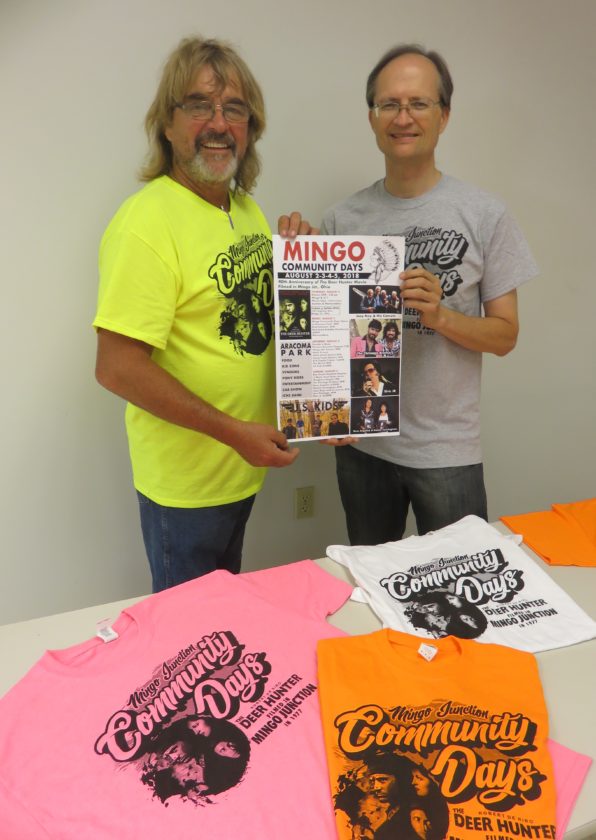 A SPECIAL EVENT — Mingo Community Days, set for Aug. 2-5, combines a new venue at Aracoma Park and a host of activities and entertainment in addition to a celebration of the town’s connection to “The Deer Hunter,” a movie that involved filming in Mingo before its release in 1978. A kickoff dinner at the Knights of Columbus Hall on Aug. 2 will feature a nostalgic look back at it in addition to the presentation of community service awards to recipients being announced this week. Also planned is the unveiling of a “Deer Hunter” themed mural. Jim Freiling, left, of the Mingo Business Association, host of Mingo Community Days, and Bobbyjon Bauman, president of the Ohio Valley Youth Network and an event committee member, show off commemorative T-shirts. One of the activities on Aug. 4 will be the second-annual Mingo Idol competition for which Bauman is recruiting contestants. -- Janice Kiaski

MINGO JUNCTION — Mingo Community Days will capitalize on a unique piece of the town’s history as part of a four-day celebration next month that includes the unveiling of a mural, honors for local residents, a change in venue and a variety of festivities for area residents to enjoy.

Hosted by the Mingo Business Association, Mingo Community Days kicks off Aug. 2 with a dinner where the program turns nostalgic, remembering the 40th anniversary of “The Deer Hunter” and Mingo’s connection to it.

The production included filming in Mingo during the late 1970s and the involvement of local residents, according to committee member Jim Freiling, who explained the dinner at the Mingo Knights of Columbus Hall will include special displays, memorabilia and a video, the handiwork of committee member Tom Fitzgerald.

“The movie was filmed here in 1977 and released in 1978,” Freiling said of the war drama about three Russian American steelworkers — actors Robert DeNiro, Christopher Walken and John Savage — whose lives are forever changed after fighting in the Vietnam War. The movie also included John Cazale, Meryl Streep and George Dzundza in supporting roles.

“Tom interviewed a number of people pertinent to the movie,” Freiling said of the program that will be a special element of a special evening.

“Tommy will have a video program, and he has kept this a secret to spring on everybody,” Freiling said. “He does amazing stuff, and I am really anxious to see what kind of presentation it will be,” he added.

The dinner is open to the public, with doors opening at 5 p.m. and the meal following at 6 p.m. Tickets are $25 per person, available through July 30 at Softite Federal Credit Union, Pesta’s Country Market and the city building or by calling (740) 314-8965. Commemorative T-shirts also are available for $12.

Another “Deer Hunter” element of Mingo Community Days comes earlier in the day Aug. 2 with the unveiling of a special themed mural that will be installed on Commercial Avenue across from the city building.

The 24-by-16-foot artwork is being crafted by Campbell Signs in Calcutta using a digital laser on powder-coated aluminum sheets, which then are pieced together to form the scene, Freiling explained.

“The mural is going to be really special,” Freiling said, noting it will include six pictures of Mingo’s direct connection to the movie.

The Aug. 2 dinner also will be occasion to present community service awards to several recipients with their identities to be announced this week.

Aracoma Park is the new venue for Mingo Community Days festivities, a site that Freiling said provides more space and “a great spot” for musical acts to perform. “We are moving from downtown to Aracoma Park because our park and stage are among the premiere places in the community,” he said. “The village built a new, beautiful stage and wants to showcase it.”

“We have 17 vendors in the park and five inflatables for the kids,” Freiling said. “We can do so much for the kids and community and promote our park, too,” he added.

There will be a food plaza, crafters and vendors, a Kids Zone with inflatable entertainment and a variety of musical acts on stage during the Mingo celebration.

Mingo Community Days unfolds at Aracoma Park on Aug. 3, beginning at 4 p.m. with opening ceremonies at 6 p.m. and featuring the national anthem and other patriotic music. Evening performers include Paul Grant and Bobby Pizzoferrato, ALBVS and the Moonwalkers.

Festivities on Aug. 4 include a free pool day for swimmers, courtesy of the village, and a noon parade featuring the Indian Creek High School Marching Band, local safety forces, classic cars and the Princess Aracoma/Little Chief Logan contest candidates. Parade participants will assemble at the Mingo Knights of Columbus Hall at 11 a.m. with the route proceeding to Logan, Granatir Avenue and then the park. The band will continue its performance onstage, and a car show of as many as 30 vehicles will be staged in the small shelter area. Dash plaques and some cash prizes will be presented.

The Bay Six Project of Mingo Junction will conduct the Little Chief Logan and Princess Aracoma contest at 1 p.m. Aug. 4. Participants don’t have to be residents of Mingo, and there are three age groups with two winners in each age group. Prize baskets will be awarded to each category winner.

“We’re really excited to have the Mingo Idol contest again,” Bauman said. “It went over very well last year I thought. We had a good turnout of kids,” he said.

The categories for participants are ages 8-12 and 13-18. Prize money from Softite Community Federal Credit Union will provide $100 prize money for first place and $50 for second in each category, according to Bauman, who noted Bobby Westfall of Bay Six Project will serve as master of ceremonies.

Scheutz Funeral Home in Mingo Junction, meanwhile, will be sponsoring a hot dog eating contest set for 4:30 p.m. Aug. 4 with early applications available by contacting Jeff Scheutz at (740) 317-7282. Festivities continue with Hank Vincent performing at 5 p.m. followed by an opening ceremony around 6 p.m., a tribute to local Dean Martin impersonator Rich Treglia and entertainment by the Tricia Truax Belly Dancers. The music continues with the Wreck at 7 p.m. and US Kids at 9 p.m.

At noon on Aug. 5 in the small shelter, the Two Chiefs District of the Ohio River Valley Council will host a rainboat regatta for children who will create miniature boats for a race that starts at 2 p.m. Freiling said the Boy Scouts will have a tent display all weekend with information and items available.

More music will be provided Aug. 5 with the Allegheny Angels at 1 p.m.; the Chrisagis Brothers at 2 p.m.; Nashville recording artists rose Angelica and Donna Cunningham around 3:30 p.m.; Ann Flamingo at 5 p.m.; Joey Kaye and His Comets at 6 p.m.; and Elvis Aaron Presley Jr. to close around 7 p.m.