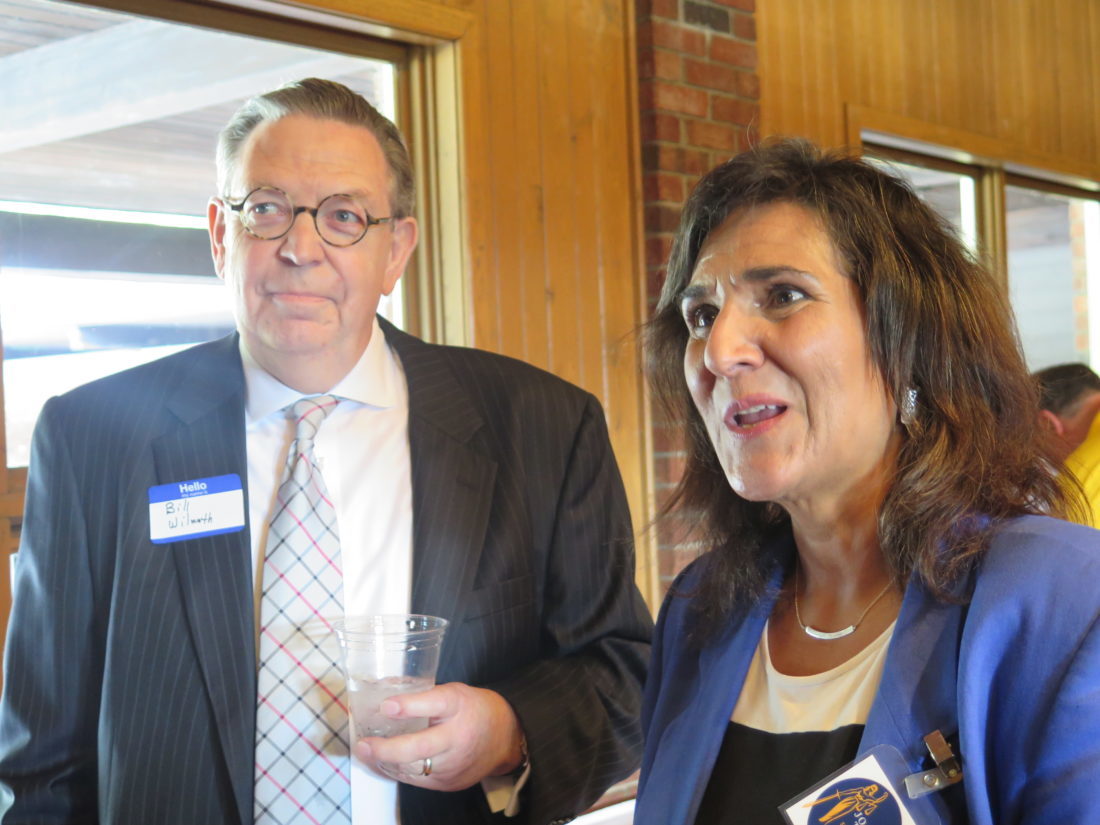 RECEPTION — Kanawha County Circuit Judge Joanna Tabit, right, socializes Wednesday with attorney William Wilmoth during a stop in Wheeling. Tabit is a candidate for one of two justice seats on the West Virginia Supreme Court of Appeals. -- Joselyn King

WHEELING — Colleagues say Kanawha County Circuit Judge Joanna Tabit is “the real deal” and has the law experience and resume needed to join the West Virginia Supreme Court of Appeals.

Tabit is seeking the District 1 court seat up for election Nov. 6, and supporters turned out Wednesday for a reception for Tabit in the Stone Room at Wheeling Park.

A Charleston native, Tabit was appointed Kanawha County Circuit Judge by former Gov. Earl Ray Tomblin in 2014, and she was re-elected in 2016.

“I’ve presided over all kinds of difficult cases — from drug cases to complex civil cases,” she said. “I have the experience to get there. I want to put people over politics. We see what is going on now in Charleston, and it’s important for me to know that this is about the people — not the politics. I’m not a politician.”

She received her undergraduate degree from Marshall University and her law degree from the West Virginia University College of Law. She has worked in law for 32 years.

Tabit began her career as a law clerk for former Justice Tom McHugh, then went on to do appellate work at the West Virginia Attorney General’s Office.

From there, she went on to join the law firm of Steptoe and Johnson and served as a courtroom litigator for 22 years.

Her former colleague at Steptoe, Wheeling attorney William Wilmoth, termed Tabit “the real deal” as an attorney and judge.

Tabit was appointed this summer by the Supreme Court as an acting chief justice to hear matters concerning suspended Justice Allen Loughry, who faces 25 federal charges and allegations that he violated the Code of Judicial Conduct.

Loughry has not resigned from the court, and remaining justices all stepped down from the case.

As the appointed chief justice, she was charged with contacting other judges to serve as acting justices.

“Everyone I called to appoint had the same reaction I did,” she said. “It was uncomfortable, but everybody wanted to do what they needed to do to help.”

Tabit is seeking election to the unexpired seat on the Supreme Court left vacant by the resignation of former Justice Menis Ketchum. In late August, Ketchum pleaded guilty in federal court to one felony count of wire fraud for improper use of a state vehicle and a state fuel card.

Former House Speaker Tim Armstead, of Elkview, has been appointed to the seat through the election. He and Tabit are among 10 candidates who have filed for election to the term, which expires in 2020.