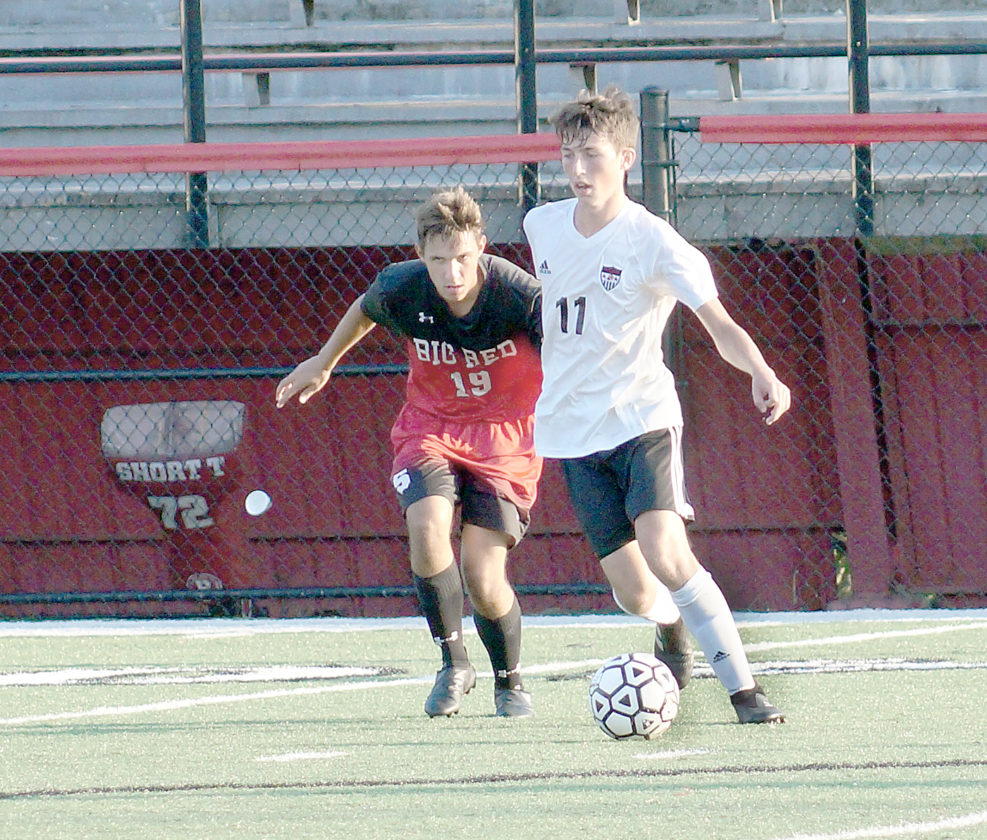 MANEUVERING — Weir High’s Jericho Givens controls the ball in front of Steubenville’s Ian Phillips during the first half of Thursday’s game at Harding Stadium. (Photo by Andrew Grimm)

STEUBENVILLE — Yogi Berra’s famous quote, “It ain’t over ’till it’s over,” has proven to be accurate during the course of many sporting events, and it was proven to be true once again Thursday inside Harding Stadium.

Trailing the Steubenville boys soccer team in the waning seconds of the game, Weir’s Caleb Hvizdak scored on a direct kick with four seconds left in the game resulting in the game ending in a 1-1 tie.

The perspective was much different on the Weir High (3-5-3) side.

“It is always a hard-fought game whenever we play them,” Weir High coach Matt Kopp said. “No matter what, it always seems like it is a one-goal game or a tie. I was surprised by Big Red. They have some injuries, but they came out tough. We had some lulls. We played in waves. We had some good minutes, but then we would have lulls for several minutes.

Jacob Noble scored the lone goal for Big Red (3-2-3) off of an assist on a free kick by Ian Phillips.

Jacob Clevenger made eight saves in goal for Steubenville.

“We are so banged up right now, but the guys who put their uniforms on gave a great effort,” Bowers said.

Weir used two goalies in the game. Jacob Warrick started in goal, and he made five saves before being replaced by Skylar Jackson (one save) after the Big Red goal with 17:24 remaining in the game.

Kopp played against Big Red during his time as a player at Weir.

“It is different from when I played,” Kopp said. “Big Red has an insane amount of talent. They didn’t have as much talent when I played against them. They play hard. They are tough. They have a lot of energy. They get hyped up. You have to be ready to play when you play against them. If you are not ready to play, it will show. This is a rivalry game. You have this game and Brooke. These games are always close.”

Big Red and Weir have played some memorable games through the years, and this year’s match up will be added to that list.

“We have pulled a few out at the end that ended in a tie,” Bowers said. “Today, they were able to pull one out in the last few seconds and get a tie.”

Both teams had some opportunities to score during the game, but both teams were only able to take advantage of one opportunity.

“Our three best scorers are on the bench injured,” Bowers said. “That makes it tough to finish when you don’t have your top three guys.”

The Red Riders had some chances right in front of the goal, but they were not able to convert.

“I’m not happy,” Kopp said. “They are over here celebrating, and I’m standing by myself. We had five or six really-good chances in front of the goal. We had an open goal, and we missed or we hit it wide. We had eight shots, but five or six wide-open shots. I will take the tie, but I am not happy with how the game went. We had our chances. We had some dangerous chances. We did not finish.”

Big Red will once again be competing in the tournament. Big Red won the Class 4A title last season, but the team moved up to Class 5A this season. Big Red’s next game will be in the tournament semifinals.

The Red Riders did not qualify for the tournament.

Weir is scheduled to play Elkins at 2 p.m. Saturday on the road.