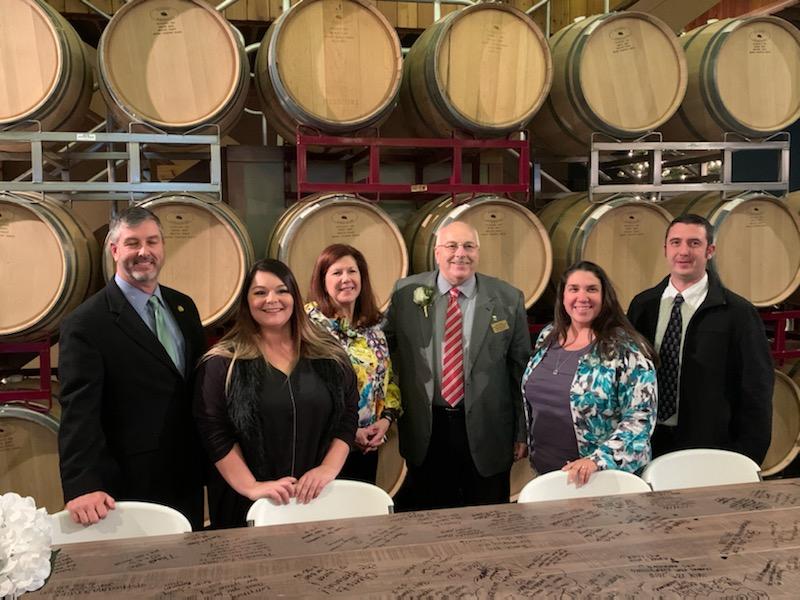 RECOGNITION — Honors were given during the East Central Association of Realtors Hall of Fame induction at the Tool Shed Event Center in Dover on Nov. 13. Among those participating were, from left, Scott Williams, Ohio Realtors executive officer; Ashley Cunningham; Anne Pettit, Ohio Superintendent of Real Estate; and Hall of Fame inductee Rick DeLuca; and Amelia Taggart and Jay Petrella. -- Contributed

DOVER — Local real estate broker Rick DeLuca of DeLuca Realty was inducted into the second class of the East Central Association of Realtors Hall of Fame at the Brietenbach Winery Tool Shed Event Center on Nov. 13.

A Realtor for 25 years and broker since 2001, DeLuca was inducted into the hall along with two long-time Realtors from Tuscarawas County. The hall grew last year with six inductees from throughout the ECAR board area.

DeLuca started in 1995 and opened his office in Steubenville in 2001. The company moved to Canton Road in Wintersville in 2009 and remains in business there today. In addition to running his office, DeLuca is an adjunct instructor of real estate at Eastern Gateway Community College.

At the state level, DeLuca has served as the longest consecutive running district vice president of Ohio Realtors, serving seven terms and will finish next year after 14 straight years. He has chaired four major committees at the state level — RPAC trustees, communications, strategic planning and currently on legal issues. He has also served on the Ohio Realtors executive committee for 14 years.

At the national level, DeLuca served three years on the conventional financing committee.

DeLuca also is active in the Ohio Valley Athletic Conference, serving as director of the OVAC boys and girls basketball championships and the OVAC volleyball championships, as well as serving on the board of commissioners. In 2010, he was inducted into the OVAC’s Hall of Fame. He is currently in his 51st year as a sportswriter for the Times Leader. He recently published his second book, “The Inspired Writings of R”. His first book, “Hitting for the Cycle in Real Estate,” combined his experiences in baseball and real estate.