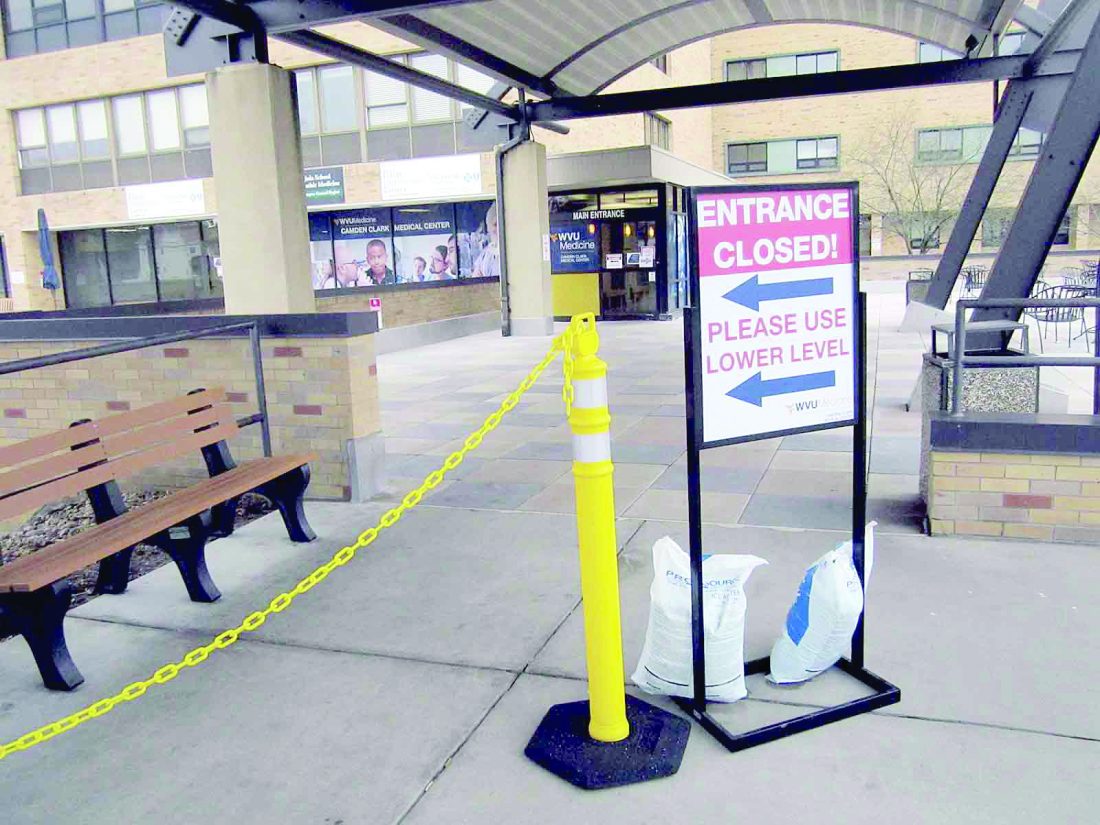 REPARATIONS — The North Tower entrance to WVU Medicine Camden Clark Medical Center in Parkersburg was closed in mid-March as the hospital made preparations to deal with the COVID-19 pandemic. Now, the 19-hospital system is working to deal with reduced revenue thanks to the cancellation of elective and non-emergency procedures.

PARKERSBURG — Despite health care workers’ positions on the front lines of the battle against the novel coronavirus, hospitals are not immune to the economic struggles affecting many other businesses.

The federal Centers for Disease Control and Prevention’s guidance last month to stop elective and non-emergency procedures — and many governments’ orders to do the same — has inhibited cash flow to many hospitals and hospital systems, leading them to evaluate staffing levels even as they prepare for predicted surges in COVID-19 patients.

“The volumes at the hospitals have essentially dropped by half,” said Albert Wright, president and CEO of WVU Medicine, which owns 11 hospitals across West Virginia and manages eight more, including one in Maryland and one in Ohio. That’s decreased revenue by “35 to 50 percent depending on the hospital. We’re a $3 billion organization.”

West Virginia has more than enough beds and intensive care units it needs to meet the approaching surge in cases, according to the latest projections from the Institute for Health Metrics and Evaluation at the University of Washington. But, like other states, its hospitals also have workers without a lot of work to do.

That’s led some facilities to lay off or furlough workers, or ask them to take time off earlier than they planned, with the caveat that they might not get paid.

That’s not been the approach at WVU Medicine.

Wright sent an e-mail to employees earlier this week announcing WVU Medicine’s plan to deal with the decreased workload while trying to maintain the workforce he knows will be needed in what could be the not-too-distant future.

According to the e-mail, provided by WVU Medicine, a work-reassignment program has been developed to match employees with new areas or shifts where they are needed. In the event that an alternative can’t be found, the worker will be sent home but will still be paid 75 percent of their hourly rate and work status.

“Some of these people were starting to think, ‘Should we go to New York and help there and get paid?'” Wright said. “It just didn’t make sense to lay people off for a month or two. Even longer than the COVID, people are going to remember how they were treated by their employers.”

The plan will be reassessed in mid-May, the e-mail said. To pay for it, Wright and other senior executives, including all hospital CEOs, agreed to take a 10 percent pay cut for the next six months. A 90-day hiring freeze has been enacted, except for a few critical positions, he said, and the employer match for retirement accounts has been suspended for the rest of 2020.

“That saves a lot of dollars and doesn’t take any money out of anybody’s pocket today,” Wright said.

Still, despite WVU Medicine’s ability to provide what it can for its employees, that hospital system’s approach isn’t one that others are able to take.

Thomas Health, which operates St. Francis Hospital in Charleston, and Thomas Memorial Hospital in South Charleston, announced last week that about 500 employees across its network were being furloughed due to services and procedures put on hold during the pandemic.

“While the majority of our workforce will continue to work full-time, we have had to take the difficult step in temporarily furloughing workers who do not have positions directly related to our most critical needs,” Thomas Health President and CEO Dan Lauffer said in a statement. “This was a very painful decision to make, and I recognize the tremendous sacrifices that staff are making in this time of uncertainty. Given these extraordinary circumstances, this was an action that we had to take to ensure long-term viability of our health system, for our workforce at large and for the communities we serve.”

Lauffer said the action was necessary also to ensure the long-term viability of the health system and he hopes to welcome the furloughed workers back “as this pandemic resolves and when our services are back to full capacity.”

U.S. Sen. Joe Manchin, D-W.Va., on Thursday discussed the proposed Interim Emergency COVID-19 Relief Act, which would include, among other provisions, $100 billion for grants to hospitals and other health care providers — something Wright said would be welcome relief.

“I would be right there with every other hospital administrator with my hand out,” he said.

Marietta -based Memorial Health System employs more than 3,000 people. It has avoided large-scale layoffs by reassigning employees and asking leadership and others to take additional unpaid time off, said DeeAnn Gehlauf, vice president of business and organization development.

“We will go to great lengths to not lay off our staff,” she said. “They’re wonderful. Our focus is on them right now.”

As an example, Gehlauf pointed to a program in which cardiac and pulmonary rehab patients exercise together under the supervision of nurses that has been curtailed as people try to maintain social distance. Nurses who worked there have been trained and assigned to field calls on the system’s nursing line, where “our calls have doubled almost every day for a long stretch of time.”

There have been employees who lost jobs, in some cases because they volunteered to be placed on leave rather than have multiple people’s hours reduced, Gehlauf said. Some have been able to take advantage of relaxed unemployment standards. They remain in the labor pool and will be called on if needed, she said.

“Anyone who’s not working their normal hours will be (working them) soon, I hope,” Gehlauf said.

Washington Health Systems in Washington County, Pa., announced layoffs last month in departments that have been temporarily closed due to the COVID-19 pandemic per the state mandate postponing elective surgeries and operations and temporarily closing outpatient centers.

“It’s impacted us greatly,” WHS President and CEO Brook Ward said in a video post April 3. “Any organization who receives a large amount of their revenue — in our case, almost 50 percent — from those outpatient procedures would be impacted when they get turned off.”

Ward said in the post that the company was trying to reduce hours and expenses by doing one- to two-week layoffs for employees who work in those impacted departments. The intention is to bring the employees back to work when the spread of COVID-19 slows down, he said.

“In all those departments that had closure or shut down,” Ward said in a video post, “we did an inventory of every staff member who worked in that area to find out if they had prior experience in the ICU, ED, or inpatient. And if they did, we’re trying to get them retrained to work back in that area when we have a surge.”

In a virtual meeting Thursday, Ward said that while the hospital is “ramping up” to get ready for a potential surge in COVID-19 patients, they’re also “dealing with the financial distress of seeing over half of our revenue essentially be cut off.”

He said they wouldn’t be laying people off who work in the emergency department, intensive care unit or inpatient floors that would be needed should a surge in COVID-19 cases occur.

“If we have a surge, we may need to bring some of those folks back,” he said Thursday. “Probably not in a clinical role – they may not have that skills set – but here as extra helping hands.”

In Lawrence, Kan., LMH Health has seen a 36 percent reduction in patient revenue since curtailing its elective services in response to the pandemic, said Rebecca A. Smith, the hospital’s vice president of strategic communication. That’s expected to cost approximately $1.7 million a week, but so far, none of the system’s 1,810 employees have been laid off, she said.

“Many areas have had to flex staffing down, as the organization doesn’t currently have the volume to support standard levels of staffing,” Smith said via email. “As such, some employees have been temporarily placed on excused absence or have elected to take leave without pay. This is standard practice for low-patient census at LMH Health (and any hospital), although this situation is significantly more dramatic than we typically experience.”

Employees can use paid time off and sick leave during these absences, and those with little or no leave balances are given top priority in the labor pool, Smith said. LMH is covering the cost of health insurance premiums for employees who run out of leave.

In addition, directors, managers and senior leaders are reducing their work time by 25 percent over a four-week period that began March 30. Non-clinical support areas are making similar adjustments.

“We have not experienced an event like this in our professional lifetimes,” LMH Health President and CEO Russ Johnson said. “It obviously requires extraordinary steps to both care for the community and protect the hospital.”

The University of Kansas Health System, which includes hospitals across the state, has not yet made or planned any layoffs or furloughs.

“We’re preparing for the surge,” said Jill Chadwick, director of media relations for the University of Kansas Health System. “We do have as many employees (as possible), mostly non-clinical, working from home. We activated our emergency response plans nearly four weeks ago which included limiting surgeries and procedures to conserve personal protective equipment.”

(Katie Anderson and Lauren Fox contributed to this story.)