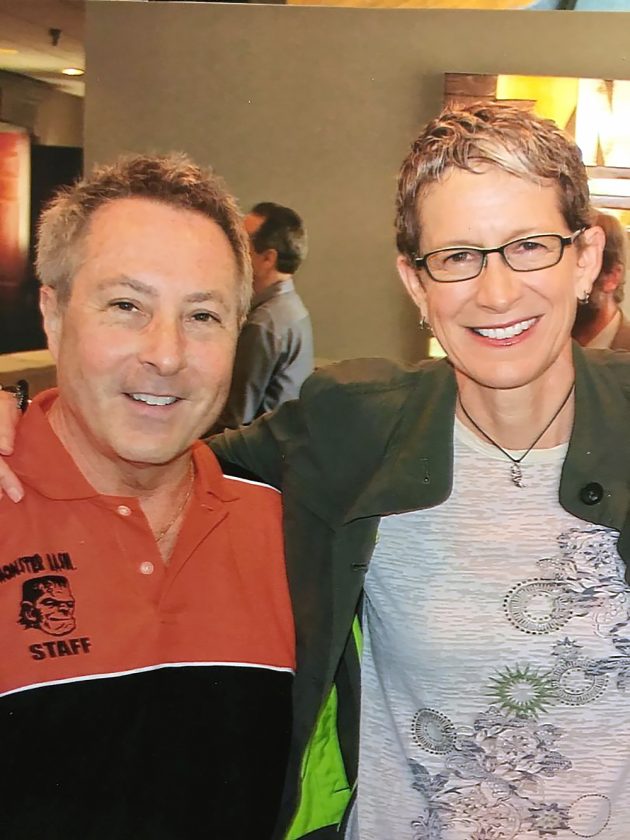 COMING TO CARROLLTON CHURCH — Pastor Mark Statler of the Church of Christ (Christian Disciples) at 353 Moody Ave., S.W., Carrollton, poses with Victoria Price, daughter of the late movie icon Vincent Price, who will be giving a presentation at the church on Aug. 18, beginning at 6 p.m. It is free and open to the public. Her program topic will be “The Price of Fear and The Legacy of Love.” -- Contributed

CARROLLTON — Victoria Price, author, inspirational speaker and daughter of movie icon the late Vincent Price, will be presenting the program “The Price of Fear and The Legacy of Love” at 6 p.m. on Aug. 18 at the Church of Christ (Christian Disciples), located at 353 Moody Ave., S.W., Carrollton.

The program is free and open to the public. A love offering will be accepted.

“It’s a program that you definitely don’t want to miss, and this is a precious opportunity that most churches or communities don’t ever get to experience,” notes church Pastor Mark Statler. “The program is powerful and inspiring whether you are a fan of Vincent Price or not, and Victoria’s intimate and dynamic presentation is very moving,” Statler said.

Since his death in 1993, Vincent Price’s legacy as a Hollywood legend has only grown in stature, according to Statler. His lengthy and distinguished career spanned 65 years, including as the voice of “The Saint” on the radio; as an actor in such horror films as “House of Wax” and “The Fly” and many Poe films of the 1960s; in classic movies such as “Laura,” “The Song of Bernadette” and “The Ten Commandments”; on popular TV shows such as “Batman” and “The Brady Bunch”; and as a star on the Broadway stage.

In addition to being an icon of stage and screen, Price was an art historian and collector who did much to popularize the visual arts in the United States and was a gourmet chef and author of bestselling cookbooks.

Widely revered for his elegance and erudition, the Renaissance man left his mark on many areas of American culture during the 20th century.

“Vincent’s passion for the arts gave him a second life as a savvy columnist and museum founder, even as his films were featured in drive-ins nationwide,” Statler noted. “And through it all, Vincent Price’s professionalism, grace under pressure and tongue-in-cheek humor earned him lifelong friendships among his peers and generation after generation of loyal fans.”

He also was a loving father to his daughter Victoria, who was born shortly before he turned 51 at the height of his popularity.

Victoria and Vincent spent more than a year taping conversations that would form the basis of her biography-cum-memoir, “Vincent Price: A Daughter’s Biography.”

“Victoria’s account of her father is one of candor and honesty; both his passionate and charismatic public persona and his conflicted inner life are treated with curiosity and understanding,” a promotional news release notes. “In writing about the father she adored, Victoria reveals a man complex, human and humorous.”

An actor of range, less than one-third of the movies in which he appeared were in the horror genre.

Victoria also has written for The New York Times, A&E’s “Biography” and many other platforms as well as having taught at the University of New Mexico, Highlands University, and the Philos School, an alternative arts-and -humanities school in Sante Fe, that she helped to found.

She has worked as an interior designer, has appeared on HGTV and in many design publications. She also is an interfaith/inter-spiritual minister, having been ordained in 2016. Victoria is an international inspirational speaker and author of the recent memoir, “The Way of Being Lost: A Road Trip to My Truest Self,”

Additionally, she has written the preface for a 50th anniversary edition of “A Treasury of Great Recipes,” a cookbook written by her father.

Her books and photos will be available for purchase after the program.