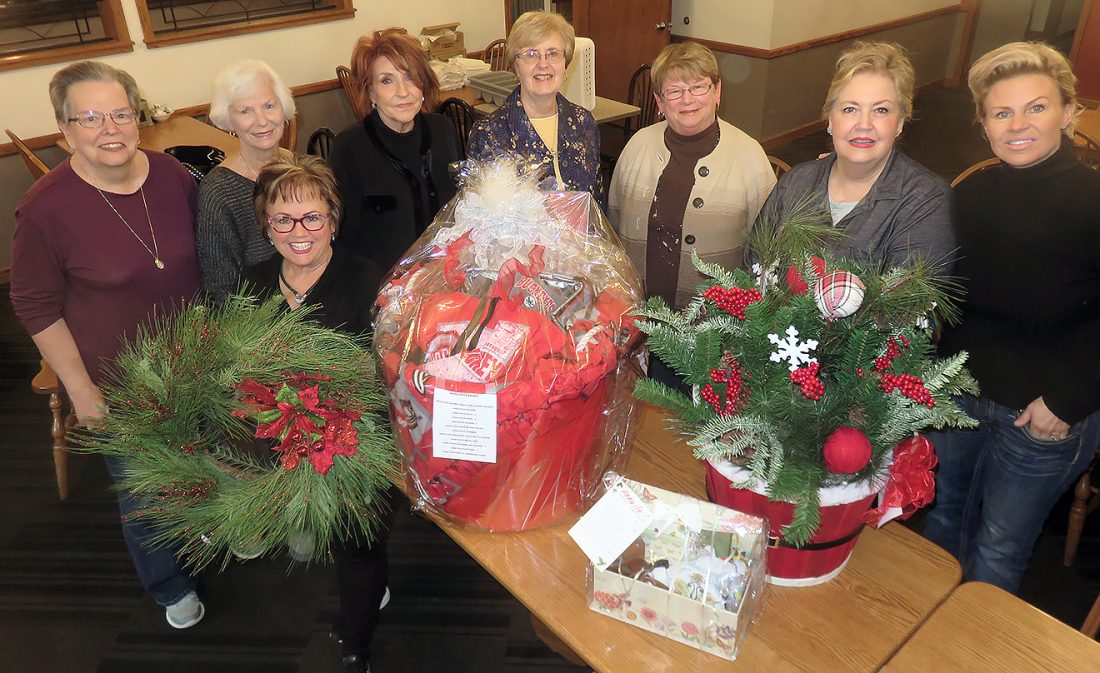 PLANNING FOR EVENT — Members of the Wintersville Woman’s Club continue with preparations for their major annual fundraiser, Holiday Splendor, which will be held Dec. 1 at St. Florian Event Center in Wintersville. The luncheon and style show will feature a variety of vendors and boutique shopping beginning at 11:30 a.m., followed by lunch served at 1 p.m. and then a style show featuring fashions by Christopher and Banks. There will be vendor shopping afterward until 4 p.m. The event also will include door prizes, Chinese auction baskets, a drawing for a TV and a special grand prize drawing for jewelry donated by Discovery Jewelers in Wintersville. Tickets are $30 each with checks made payable to the Wintersville Woman’s Club and mailed to 52 Pleasant St., Wintersville OH 43953. The deadline is Nov. 25. With just two of many Chinese auction baskets are members Tyra Timmons, front, and back, from left, Judy Ostrowsky, Aimee Jaros, Iris Craig, club President Mary Beth Allan, Marjean Sizemore, Robbie Young and Shannon Irvin. -- Janice Kiaski

WINTERSVILLE — The Wintersville Woman’s Club will forge ahead with finalizing plans for its major fundraiser when the group meets for its regular noon luncheon meeting on Nov. 21 at St. Florian Event Center in Wintersville.

Tickets remain on sale through Nov. 25 for the club’s 18th-annual Holiday Splendor that will be held Dec. 1 at St. Florian Event Center. The luncheon and style show will feature a variety of vendors and boutique shopping beginning at 11:30 a.m., followed by lunch served at 1 p.m. The menu includes roast beef, pasta, Undo’s special salad, bread and dessert.

The style show featuring fashions by Christopher and Banks will follow lunch, and there will be vendor shopping afterward until 4 p.m. The event will include door prizes, Chinese auction baskets, a drawing for a TV and a special grand prize drawing for jewelry donated by Discovery Jewelers in Wintersville. Tickets are $30 each with checks made payable to the Wintersville Woman’s Club and mailed to 52 Pleasant St., Wintersville OH 43953. Questions can be directed to Karen at (740) 381-2568.

Proceeds from the fundraiser help fund the awarding of four scholarships, including the Glenda Dunlope, Wintersville Woman’s Club, Franciscan University and Eastern Gateway Community College scholarships. Proceeds also benefit other endeavors such as a special project at Christmas to sponsor a family through Wintersville Good Neighbors.

Darlene Woods gave the meditation and grace at the club’s Oct. 17 meeting attended by 37 members.

Following lunch, Iris Craig introduced guest speaker Tony Foglio of Toronto, the founding pastor of Sonrise Community Church in San Diego. He retired as a pastor in 2009. He is the author of several books and serves as chairman of the advisory board for World Help, “a Christian humanitarian organization serving the physical and spiritual needs of people in impoverished communities around the world,” according to its website.

“One of the greatest impacts on a change in culture is technology,” said Foglio, citing as an example that in the 16th century, about 40 books a year would be printed. Today on Amazon, there are as many as 35 million books available.

“Whether you like the present culture or not, it’s the culture we presently have,” said Foglio, explaining he has traveled to and spent time in 52 countries.

“The biggest impact on the culture is and always has been religion,” he said, noting “the Bible has been very instrumental in establishing who we are as a people.”

Different religions have established different cultures throughout the world, according to Foglio, who recalled a New York Times article of about 25 years ago. The headline, he said, read “Is Christianity Dead in America?”

“I grew up in the ’50s, and I can remember on any given Sunday every church in every community was filled,” he said of what’s not the case now. “The pulpit lost the culture.”

Those who put their faith in Jesus Christ are the light of the world, he said.

“If the world is darkness, and we don’t like the direction of our country, our community, I think maybe we’re the ones at fault. We’ve stopped shining,” he said. “One of the wonderful things I appreciate about the woman’s club is you’re a light — you’re making a difference, impacting the world. Shine brightly, ladies, please, that we can win the culture back.”

Under old business, it was noted that members Pat Ketzell, Marjean Sizemore and Linda Nolf were club representatives attending the Gold Star Mothers ceremony held Sept. 29 at the Memorial Forest Shrine located in the Mohican Memorial State Forest near Loudonville.

Ketzell shared that she and Sizemore also joined with Ohio Federation of Women’s Clubs members in Springfield earlier in the month to celebrate the 125th anniversary of the founding of the organization. Many of the OFWC women wore attire reminiscent of the 1894 to 1910 era, including the two of them.

Ketzell also addressed the club on how best to report for points club activities to the district and state level.

Other club business included voting on the budget; making the decision to sell Rada cutlery as a fundraiser to host a spring banquet luncheon for the state president. A bake sale also will aid that effort. 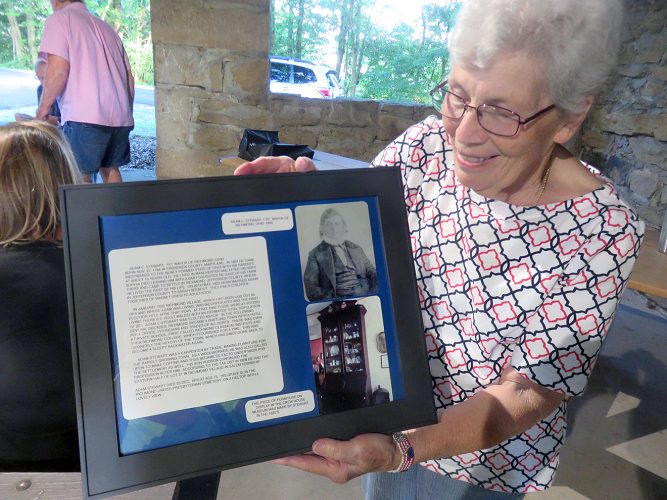 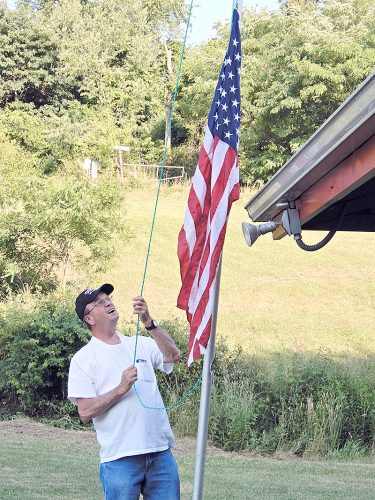