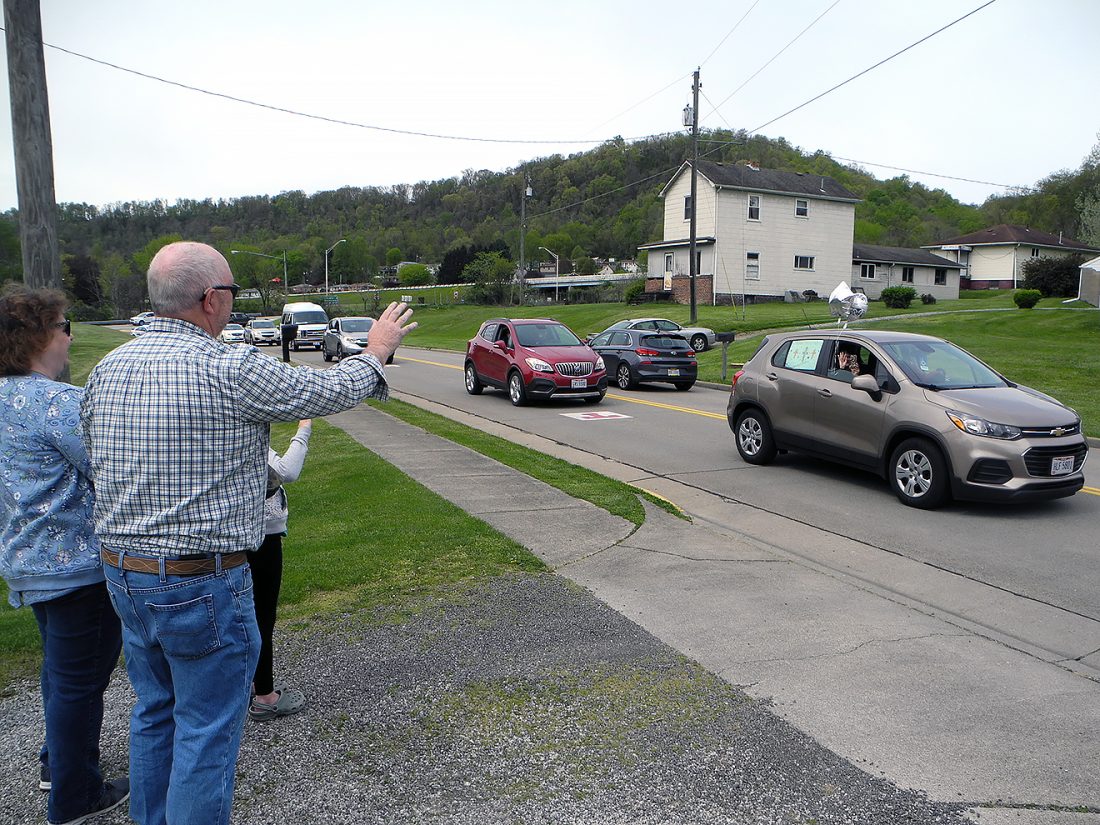 GOING AWAY PRESENT — The Rev. Kevin Rinkes of the First United Methodist Church of Toronto waved to the many members of his congregation who formed a parade past his home to wish him a happy retirement after 20 years of serving them. They were assisted by the Toronto police and fire departments. With Rinkes was his wife, Susan, and granddaughters, Kylie and Maliea. -- Warren Scott

TORONTO — The Rev. Kevin Rinkes will soon retire following a nearly 30-year ministry that included 20 years at the First United Methodist Church of Toronto, and members of the church expressed their appreciation May 10 in a unique way.

With help from the Toronto police and fire departments, they formed a parade along Rinkes’ Dennis Way home. Some bore signs saying how much they will miss him, while others called out to him as they passed.

Rinkes was asked if the procession, which started at nearby Toronto Junior-Senior High School, was a surprise.

“It certainly was. I had no idea this was in the works,” said Rinkes, who greeted the many participants with his wife, Susan, and granddaughters, Kylie and Maliea.

Marlene Wolf said she and other church members wanted to thank Rinkes in that way because they have missed him since he wasn’t able to lead an Easter service and others in what will be his last year as a full-time minister.

The church is among many church officials have closed temporarily to prevent spread of the coronavirus. He said if the church reopens in June, his last month in the ministry, it’s likely that its 125 members will be divided among two worship services to practice social distancing.

Wolf noted Rinkes has kept in touch with members through a weekly telephone call in which he shared a scripture reading and words of encouragement.

Rinkes said it’s been difficult not seeing his congregation and others to whom he ministered.

“It’s kind of heartbreaking that you can’t visit people in nursing homes and hospitals (also locked down). I try to stay in touch with their families and keep up with them,” he said.

A St. Clairsville native, Rinkes came to Toronto in 2000 after serving three churches in Washington County, Ohio, for nine years.

He said while church “was a very big part of my life growing up,” he didn’t enter the ministry until he was 35.

Rinkes had been working in road construction when he and his wife attended a Barnesville church. The Rev. Dan Perks, the pastor there, invited him to a Bible study that initially involved just the two of them, and it was there that he felt called to serve God.

Rinkes said when he arrived in Toronto, his second daughter, Katie, and son, Joshua, were still in school, and he’s grateful they were able to graduate there since most clergy are transferred after five or six years.

His oldest daughter, Kristin, was then in college, he noted.

Katie has grown up to become a Toronto school teacher, and Joshua also resides in Toronto.

Rinkes said he plans to spend his retirement in the Gem City while attending sports and other events involving several grandchildren and attending car shows.

He is the owner of a 1974 maroon Chevelle Laguna though he said it’s “not show quality.”