Despite the weather, Brooke County Fair brings the fun 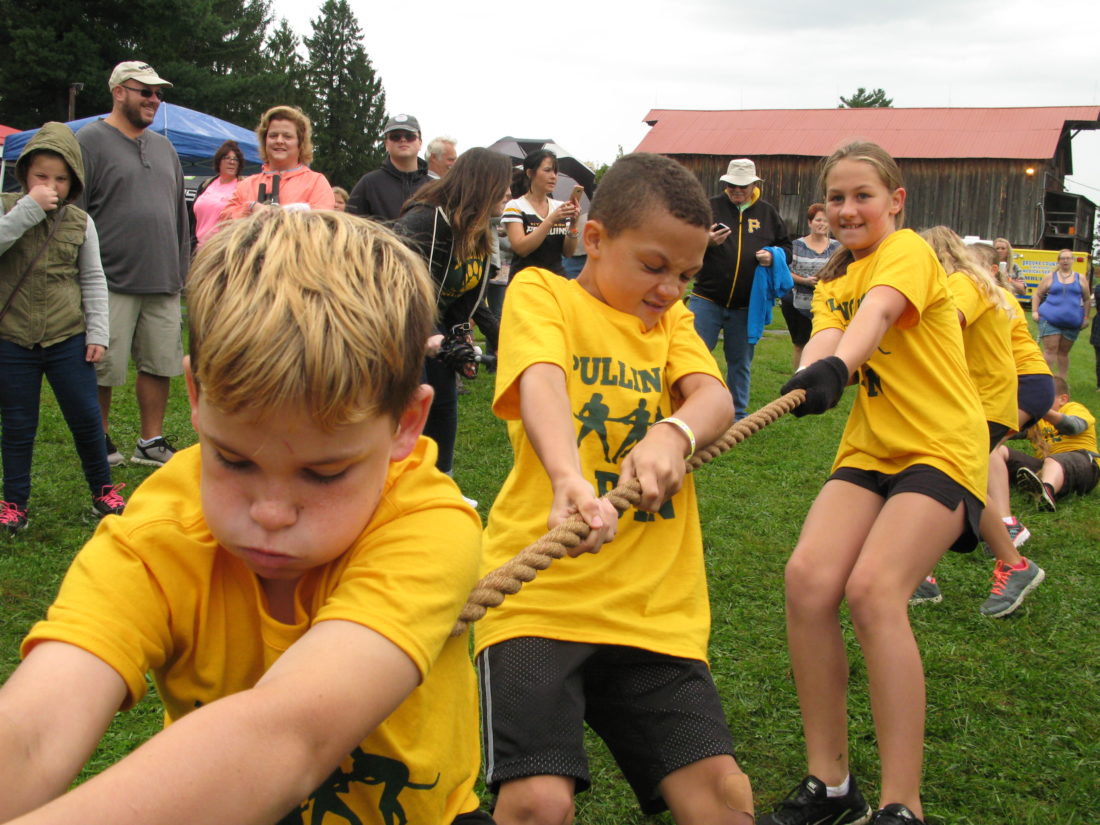 TUG OF WAR. Fourth-graders from the two Brooke County intermediate schools participated in a tug-of-war competition Saturday afternoon at the Brooke County Fair at Brooke Hills Park. The annual event used to pit schools against each other but, since the consolidation, the competition now puts homerooms from each school as teams. Pupils from Brooke Intermediate North, from front, Michael Gibson, Aiden Thomas and Khloe Anderson, put forth their best effort. -- Mark Law

WELLSBURG –A steady rain on Saturday put a damper on the Brooke County Fair at Brooke Hills Park, but it was ideal for the mud bog competition.

Patty Lish, co-chair of the fair, said events were going to continue despite the rain.

“It is not ideal weather for a fair. People are still coming in,” she said.

The fair usually draws about 5,000 people throughout the weekend. Lish said she is hoping for about 2,000 attendees.

Friday’s weather pulled in a regular crowd, she said.

The mud bog and mud volleyball events were still scheduled to go forward.

Today’s forecast calls for heavy rains throughout the day.

“We are telling the vendors to play it by ear if they feel comfortable with their tents,” she said.

Regardless of the weather, Lish is expecting those coming to the fair to have fun.

The tug of war featuring fourth-graders from the two Brooke County intermediate schools went on, with the kids slipping on the wet grass. But they still had smiles on their faces.

Prior tug-of-war competitions had pupils competing from the primary schools, but, with the school consolidation, the event now features homerooms from the two intermediate schools.

A new trophy was awarded to the winner of the event, Schwertfeger said.

Clint Craft of Steubenville and his sister, Lorie Courtney of Weirton, strolled through the fairgrounds on Saturday afternoon while a light rain fell.

Craft was asked why he came to the fair.

“It was her great idea,” Craft said pointing at his sister.

“We are disappointed with the weather, but it is great to see other people here,” Courtney said.

“It is better than sweating to death,” Craft said.

There were differing opinions from the mud bog contestants about the rainy weather.

Steve Rice of Cameron showed up with the 1978 Jeep CJ-7. He said the Jeep’s body is original, but it has a lot of parts from other vehicles.

“It is bad weather for a mud bog. I would rather it be a little drier. It is better to drive when it is drier. I don’t care about the mud, but I don’t like the weather,” he said.

The mud bog drivers race down a course a couple hundred feet long. Winners are determined by how fast or how far they go.

Tom Doty of Moundsville showed up with his mud bog vehicle, complete with about $3,000 in huge tires.

“It is good weather for mud bogging. The muddier the better. Mud bogging is about the mud. Rain doesn’t matter,” he said.

Janice McFadden, Brooke Hills Park manager, said the fair is an event for the people of the community. She said there are “tons” of volunteers who work to put on the event.

“There are a lot of activities for visitors, from music to the mud bog. There aren’t too many places where you can spend $7 and have entertainment and rides all day. Parents can come and turn their kids loose. It introduces the park to so many people who have not been here before. We have a lot of people from Ohio and even more from Pennsylvania,” McFadden said.

The fair is scheduled to be open from 9 a.m. today through 5 p.m.

(Law can be contacted at mlaw@heraldstaronline.com.)