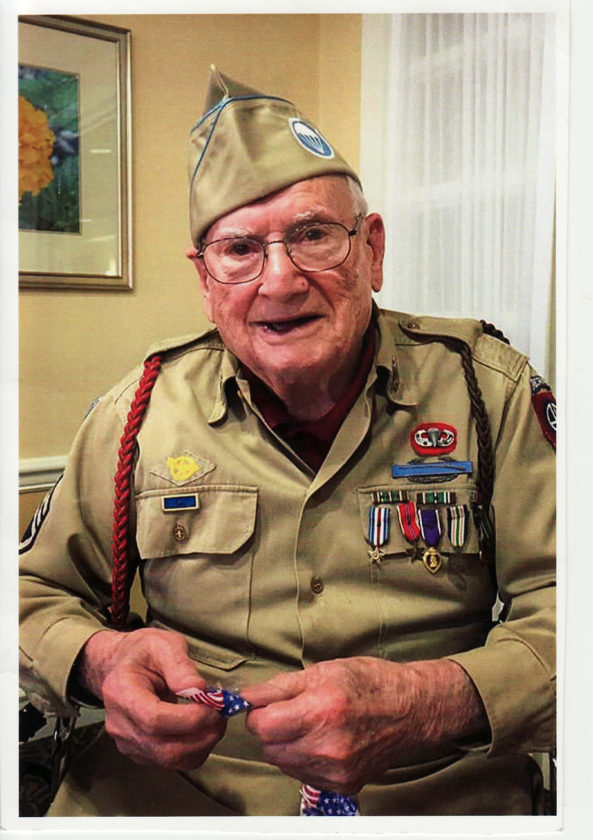 WWII VET — Former Steubenville resident Harry J. "Buff" Buffone of Houston celebrated his 100th birthday in July. He is a World War II Army veteran who was a paratrooper in the 82nd Airborne Division and never considers June 6, D-Day, to be just another day. -- Contributed

For one thing, he’s among a growing group of centenarians, as more people enjoy longevity and reach the 100-years-old mark. But as a veteran of World War II, he’s in a diminishing circle of men and women, too, as the ranks of those who fought and won the great conflict are dwindling.

According to the U.S. Department of Veterans Affairs, statistics show that fewer than 500,000 of the 6 million Americans who served in World War II are alive today.

Buffone marked the milestone birthday on July 26, celebrating at a party held at the assisted living facility in Houston where he lives.

Vince Tripodi of Steubenville submitted information about his uncle, who he said is in good health but hard ohearing. After the war, Buffone was a master carpenter who moved to Jacksonville, Fla., with his wife, Pat, and their two sons, Greg and Gary. When he became a widower, Buffone moved to Houston to be near family.

Proud to be a veteran who served his country, Buffone was born and raised in Steubenville. He joined the Army on Aug. 1, 1941, and was discharged May 26, 1945.

During that window of time, Buffone would earn the rank of staff sergeant with the 82nd Airborne Division, 3rd Battalion, 505th Regiment, I Company, a paratrooper who was part of four major combat jumps in Sicily, Salarno, Holland and France and the recipient of two Silver Stars, an Oak Leaf Cluster, two Purple Hearts, two Bronze Stars, two presidential citations and campaign ribbons for Europe and Africa and the Battle of the Bulge.

“I’m very proud of him,” Tripodi said of his uncle, who would talk about his wartime experience that made June 6 not just any old day on the calendar.

In 1944, it was D-Day, when Allied forces launched a combined naval, air and land assault on Nazi-occupied France.

In a 2003 Valley Life story in the Herald-Star and The Weirton Daily Times, Buffone revisited that experience. He had been interviewed at the time when he was still living in Florida and a member of the Fred Brown Chapter of the 82nd Airborne in Jacksonville. And it came on the heels also of having been invited to a D-Day ceremony at the Mayport naval station where a congressman at the time was presenting the Normandy Medal of the Jubilee belatedly on behalf of France.

While some veterans showed up wearing their service hat or maybe a purple heart pin, Buffone showed up in full uniform — no small fete given he had lost 21 pounds to do so. And on every Veterans Day, Tripodi said his uncle makes of point of wearing his service outfit.

Buffone was part of the mission to take the town of Sainte M’ere ‘Eglise, the first French village to be liberated in the French invasion.

“And like everybody else, he was scared, his heart pounding, the adrenaline rushing.

“When we went in and jumped, you was scared because you knew there was a lot of Germans on the ground,” Buffone had said.

“It wasn’t just dark when the more than 6,000 paratroopers designated for the assault began their landings in the early morning hours of June 6, 1944, set to take the town because of its main roads that would supply the enemy on the frontline overlooking the D-Day landing on the beach.

“It was black as coal. You couldn’t see your hand in front of your face,” Buffone had recalled.

There was no modern-day technology at their disposal to aid this generation of service personnel. No goggles enhancing night vision, for instance. No high-tech communication systems either.

“The government issued soldiers a metal clicker worth 2 cents to communicate with each other,” he had said. “If you clicked it once, and if someone clicked it twice back, you knew he was a friend. That’s it,” he had said.

Buffone recalled how one of the paratroopers landed on the top of the town church, his parachute stuck on the steeple where he dangled close to three hours, playing dead.

“The Germans had these big spotlights, and they spotted him on the steeple and started to shoot at him, but we shot the lights out, and he was OK. He got shot in the foot,” Buffone had commented.

The 82nd Airborne continued to fight on the Cotentin Peninsula, “taking little different towns here and there” until relieved on July 8, 1944, after 33 days of action. The division then moved to Utah Beach in preparation for its return to England.

Among his military honors, the highly decorated Buffone was presented his Oak Leaf cluster, Silver Star medals, for gallantry in action on Oct. 3, 1944, near Groesbeek, Holland. “A heavy artillery concentration killed two men in a machine gun section and drove the remainder of the crews out of their position, leaving the flank unguarded,” according to the citation. “Realizing that his company’s position would be untenable if turned, Sergeant Buffone of Company I, 505th Parachute Infantry, made trips through heavy machine gun and mortar fire, retrieved both guns and set them up at a strategic location to cover the flank. His cool judgment, courage and keen sense of duty enabled the company to maintain its positions,” the citation reads.

His other Silver Star medal also was for gallantry in action near Groesbeek, Holland, this time on Sept. 18, 1944, when Buffone “displayed superior courage and leadership in maintaining an effective defense of advanced road blocks vital to the protection of a glider landing zone,” according to the citation.

Buffone held the road block four hours against “furious German efforts to blast them lose,” according to one of the war stories in the Herald-Star, the headline reading, “Sgt. Buffone Defends Road Block Under Fire.”

Buffone also made headlines in his hometown paper another time: “Steubenville Paratrooper Rounds Up 200 Prisoners.” In retrospect, the 1943 story sounds a bit dramatic, how he captured 200 Italian prisoners single handed in the current Allied conquest of Sicily, Buffone had noted. “You would think this was a big battle, but let me tell you the true story,” he had said with a chuckle.

In 1943, Buffone was in the vicinity of Trapani, Sicily, on a mission to capture an Italian fort.

All was quiet and not a soul in sight inside the fort except for one lone Italian soldier, who was so happy to see Buffone, he kissed him on both cheeks and proclaimed the men had been waiting three weeks to surrender.

The Italian-speaking Buffone was led to other prisoners, and as he started down the hill with 80, there were more than 200 in line by the time he reached the bottom.

“We gave them safe passage,” he said.

Buffone was 21 and working at Wheeling Steel when he was drafted. He headed to Camp Wheeler in Georgia for basic training, staying on as an instructor. Five months into it, Buffone had said he found the job monotonous.

“That’s when I signed up to be a paratrooper,” he said, noting then he was ready to give it a try even before he learned his $21 monthly pay would jump to $71.

He underwent paratroopers training at Fort Benning in Georgia. Although Buffone said he wasn’t afraid to jump from the C47s that held about 18 men, there were those who hesitated, only to have their hands beaten with a stick until they let go.

The worst fighting his division was involved in, however, was the Battle of the Bulge, a time of snow and bitter cold and high casualties.

Buffone was one of seven men out of 3,000 in the 82nd Airborne selected to receive a 30-day furlough based on his service in combat, conduct and medals. “I was luckily chosen,” he had said. The war still on, Buffone took advantage of the time off to get married. On his honeymoon in Pittsburgh, Buffone said he remembered a big commotion and lots of noise in the streets of the Steel City.

As it turned out, Pittsburghers were reacting to the news that the war was over. Victory had been achieved.

The part of history that included World War II is something Buffone had said he’d never forget.

“There will never be another war like World War II.” 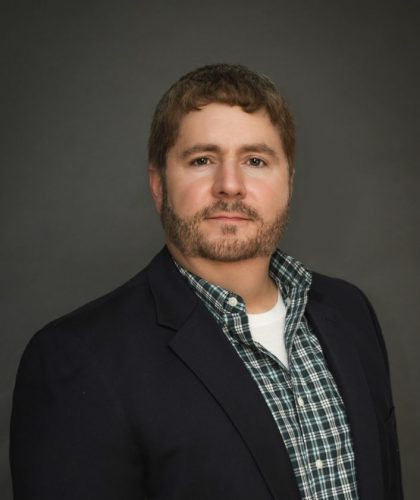 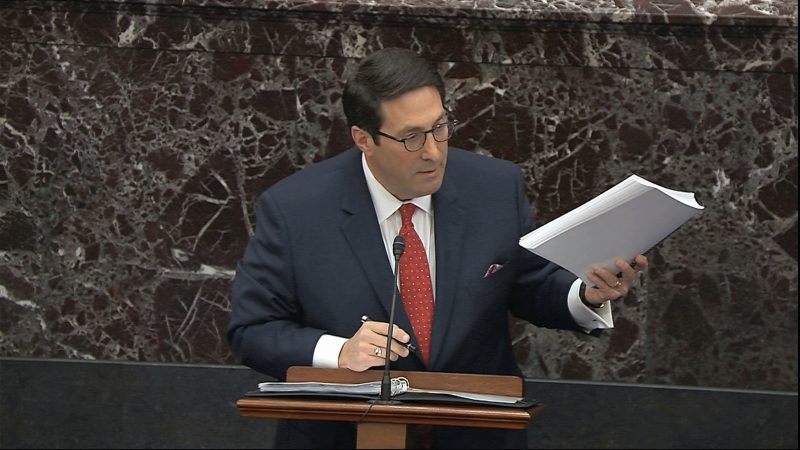 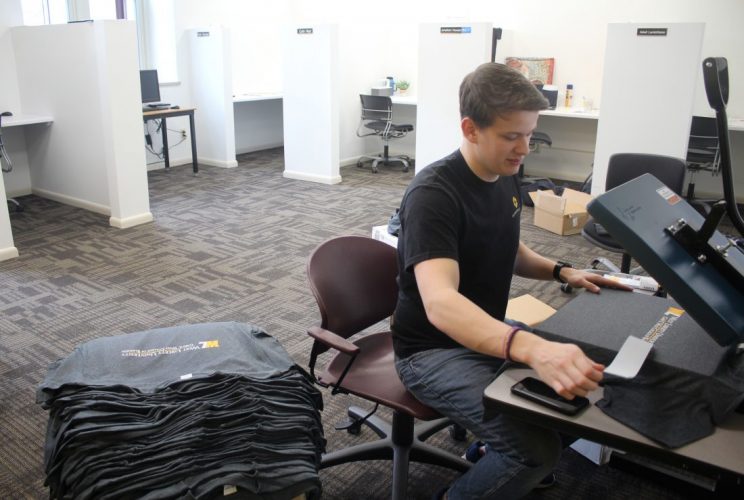