Are we done here? Nope. Cranky Congress still has work to do 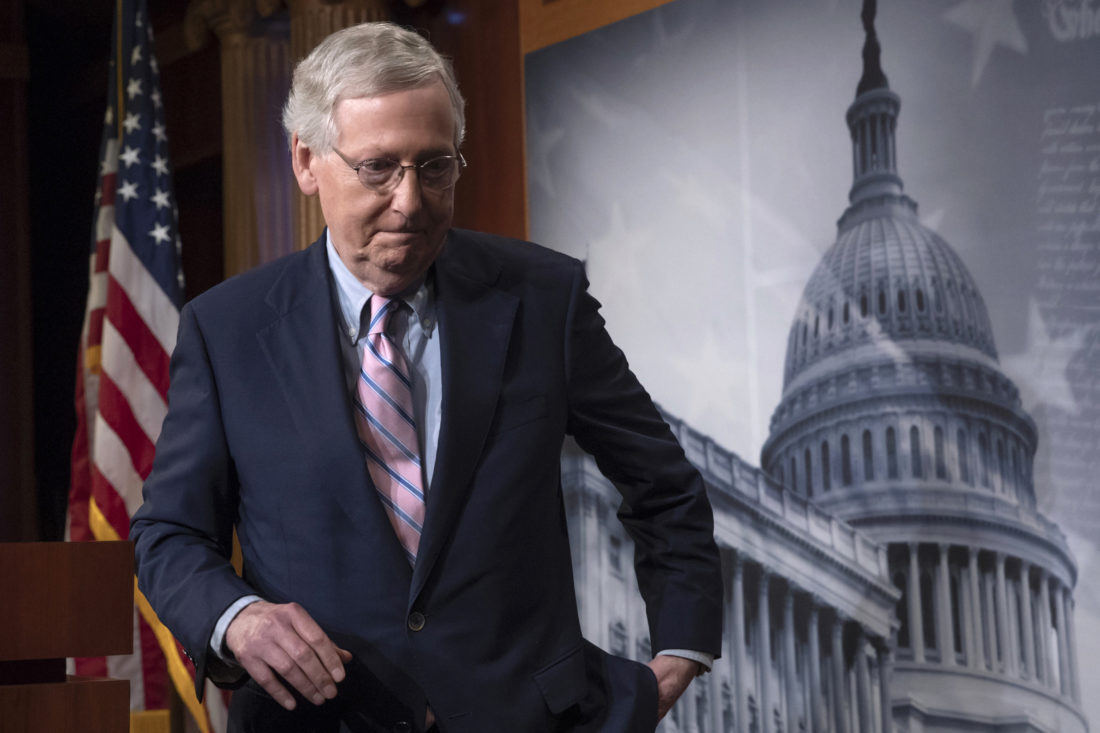 In this Oct. 6, file photo, Senate Majority Leader Mitch McConnell, R-Ky., finishes speaking to reporters at the Capitol in Washington. Parties and Christmas cookies only soothe so much in the chilly Capitol after two years of President Donald Trump's provocations, dramas like Supreme Court Justice Brett Kavanaugh's confirmation and the elections that flipped the House majority to Democrats. Everyone wants to go home, yet both chambers were scheduled to be in session next week over hefty matters, including the budget and criminal sentencing reform. -- Associated Press

WASHINGTON (AP) — Senate Democratic Leader Charles Schumer leaned back in his seat and propped up his feet on the leather chair next to him as he listened to a colleagues farewell address this week. It was a casual vibe in the normally stuffy chamber and just one sign that the end of an ugly 115th Congress can’t come soon enough, even for its own members.

There’s been shouting on the Senate floor. Both chambers rang with customary farewell speeches from members who are moving on, some forced out by the midterm elections. And in the House, a few lawmakers have ghosted the whole scene as the sun sets on the only session of Congress so far under President Donald Trump.

Parties and Christmas cookies only soothe so much in the chilly Capitol after two years of Trump’s provocations, dramas like Supreme Court Justice Brett Kavanaugh’s confirmation and the elections that flipped the House majority to Democrats. Everyone — especially members leaving for good — wants to go home.

“We have had two votes in 54 minutes,” griped retiring Sen. Bob Corker as the Senate on Thursday edged toward what would become its rebuke to the Trump administration over Yemen and Saudi Arabia. But the Senate was not in order. Everyone, it seemed, was talking — loudly.

“Can we not just vote?” Corker hollered finally.

“Yes!” other senators yelled back, in rare unison.

“Lame duck” sessions of Congress are so reviled even in less-rancorous times that leaders past have used the discontent to finish business. This year, Senate Majority Leader Mitch McConnell has threatened to keep the Senate in session to the bitter end of 2018 under Trump’s threat to shut the government down over the budget and his border wall. But McConnell also is holding out hope for some Christmas “magic” to speed business along and allow Congress to adjourn earlier.

So far, there is no sign of that happening. Both chambers are scheduled to be in session next week over hefty matters, including the budget and criminal sentencing reform. Votes remained scheduled.

That doesn’t mean votes will be cast by all 535 members of the waning Congress. In the House, eight members didn’t even bother to vote in December, according to a tally by The Associated Press.

Many outgoing members’ offices are essentially shuttered. They run their waning operations out of the “Departing Members Center” in the basement of a House office building.

“Hello. You’re reached the office of Congresswoman Kristi Noem, at-large member for the state of South Dakota,” says a recording that answers the South Dakota Republican’s House office. “Because Rep. Noem is retiring at the conclusion at the 115th Congress, our physical offices have closed.”

Noem, South Dakota’s governor-elect, was in town this week. While she was in town, she voted on two measures, including the farm bill.

There were warm moments. Plenty of departing lawmakers showed up to cast votes, say goodbye to their colleagues and staffers and do the hard work of moving out of their offices.

They included Sen. Claire McCaskill, D-Mo., who lost re-election to Republican Josh Hawley and scolded the Senate for allowing one party to do most of the legislating. Her staffers fanned out behind her and at least two dozen colleagues came to the chamber when it was her turn to her speak. Schumer, D-N.Y., appeared to listen intently, both legs stretched out and his ankles crossed on the seat of the leather chair alongside him.

“I would be lying if I didn’t say I was worried about this place,” McCaskill said. At the end of her speech, Schumer and the other senators gave McCaskill a standing ovation and lined up to hug her.

And in the House, the Republicans in the California delegation who were turned out of office on Election Day lined up Wednesday night to say goodbye and thanks. They included Rep. Dana Rohrabacher, first elected to Congress in 1988, who began his speech by naming two officers who were killed at the Capitol in 1998 by a gunman who had forced his way in.

“A lot of people gripe about the hours and sometimes some of the friction that happens among debates over important issues,” he said. “But I am so grateful to have this chance … there are many people who are serving their country who are not anywhere near having the wondrous life that we have.”

Outside Rohrabacher’s office across Independence Avenue, his name plate remained on the wall by the doorway. But further along the hallway sat an assortment of discarded furniture and other detritus from his office, including a big map of what appeared to be his district around Huntington, California, with a note stuck to it: