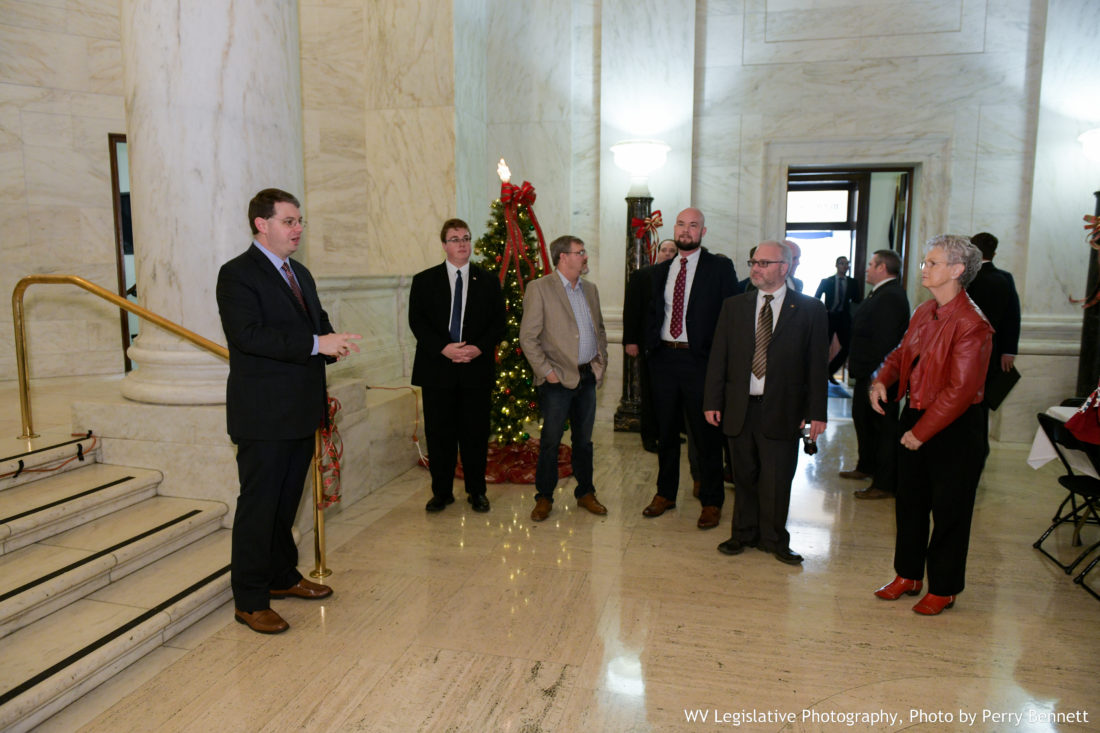 CHARLESTON — The interim speaker of the West Virginia House of Delegates will hold the position for the next two years after a ceremonial vote takes place in January.

Delegate Roger Hanshaw, R-Clay, was selected by Republican House members during a caucus on Dec. 2. The entire caucus was sworn in by Tim Armstead, the new justice of the state Supreme Court of Appeals and the former House speaker.

“We’re excited to get past this past Sunday and get down to work now,” Hanshaw said in an interview Tuesday. “It’s time to start working on the agenda priorities for the House for this coming session. We’ve already done that.”

Hanshaw was elected to temporarily fill the role of speaker on Aug. 29 after Armstead, a 10-term member of the House from Kanawha County, resigned to accept an appointment to the high court until winning a Nov. 6 special election. Hanshaw expressed his appreciation for Armstead’s service and acknowledged the House will miss his expertise.

“(Armstead) had a very different experience in the Legislature than I have had,” Hanshaw said. “He was here 20-plus years both as a member of the minority party and the majority party. I’ve only been here four years, so my experience here is necessarily different than that.”

The first time the Republican caucus voted, which was the day before the Aug. 29 House vote, Hanshaw was chosen after four rounds of voting, besting House Finance Chairman Eric Nelson, R-Kanawha, 32-30. Sunday’s vote to select the permanent speaker saw Hanshaw and Nelson facing off again, but caucus sources said the vote was not as close as the August vote, with 32 Republican delegates choosing Hanshaw and 24 delegates choosing Nelson.

Hanshaw’s goal now is to unify the caucus and start preparing for the 2019 regular legislative session, which starts Jan. 9.

“We’re committed to continuing to advance economic priorities here in the Legislature,” Hanshaw said. “We know that we’re in a time now when the work of the last four years is finally starting to bear fruit. Good policy can translate into good economic outcomes and that’s what we’re going to keep working on.”

At 38, Hanshaw is a young member of generation X and an old millennial. He is an attorney with Bowles Rice focusing on environmental and regulatory compliance.

His law degree is from West Virginia University and he has a doctorate in chemistry from the University of Notre Dame. He is a member of the American Chemical Society and the National Association of Parliamentarians. But he also took those skills and experiences to another state — something that colors his views as he prepares to take the speaker’s gavel next month.

“For me, I’ve come to this from a place where after completing education, all the job opportunities that were available to me were in on the coasts of our country and Chicago,” Hanshaw said. “None were available here. Even the job I had going to graduate school to specifically prepare for had left here. My approach here is geared toward how we keep young people from leaving West Virginia. How do we make this a place where people want to start a business and grow and raise a family? Those are my priorities.”

Part of that includes making sure residents, students and educators, and businesses have access to high-speed broadband internet. According to the Federal Communications Commission, 30 percent of state residents don’t have access to broadband. Hanshaw thinks those numbers are worse and he’s been working to fix the issue.

Last year, Hanshaw was the lead sponsor of House Bill 3093, which allows communities to create a co-op system to help provide broadband access to rural areas. He said more legislation is being planned for next year.

“We will have another broadband expansion bill this coming session,” Hanshaw said. “It will be a bill that builds on what we’ve done the last two sessions in advancing that very needed piece of infrastructure. This year’s bill will have a significant focus on wireless technology. We know that because West Virginia is such a mountainous terrain that laying conduit and broadband fiber is perhaps more expensive here than in other parts of the country. Wireless technology has to play a bigger role here in West Virginia than it would in some other states.”

Part of being speaker means picking who chairs and sits on legislative committees and other leadership posts. Delegate Riley Moore, R-Jefferson, was slated to be the next majority leader, taking over from Delegate Daryl Cowles, R-Morgan. Moore lost re-election Nov. 6 and is planning a run for state treasurer.

Hanshaw expects to announce leadership positions and committee assignments in the next few days. While he was not prepared to drop any hints on assignments, Hanshaw said he wants committee chairs to take a more direct role in crafting public policy, and he wants House members to have a greater hand in legislative priorities.

“I expect the committee chairs to be autonomous policy directors,” Hanshaw said. “They’re going to be responsible for developing agendas largely around that vision, which is how do we keep putting West Virginians to work. Not just that, but do we use the talents of members? One of the things we’re going to spend time doing over the next month is actually polling our members in detail now and finding out which policy areas our members want to specifically champion and advocate for.”

Lawmakers will be in Charleston Sunday for legislative interim meetings. Hanshaw intends to meet with delegates to flesh out committee assignments for next year during those meetings.