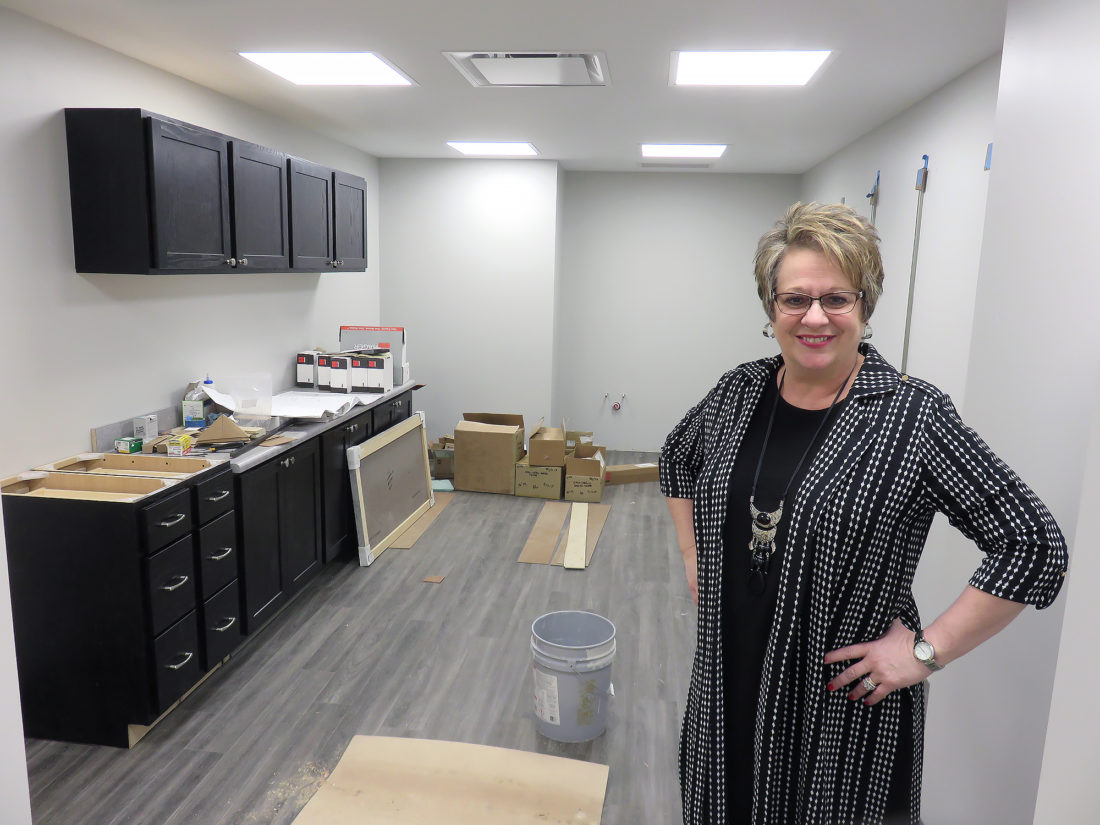 GETTING READY — Change is coming for the Ohio Valley Health Center as its prepares to move Monday from its present location at One Ross Park, 380 Summit Ave., in the Trinity Medical Center East area, back to downtown Steubenville in a newly renovated facility at 423 South St. in what was the site of the former Neighborhood House Daycare and Preschool. Executive Director Trudy Wilson said volunteers who want to assist with the move-in are welcome to be on hand at the downtown location any time from 9 a.m.to 6 p.m. Monday. -- Janice Kiaski

STEUBENVILLE — Monday will be a “moving” day in more ways than one for the Ohio Valley Health Center.

The provider of “high-quality health care to the uninsured and underinsured individuals and families in the Ohio Valley,” regardless of their ability to pay, will be relocating back to the downtown.

And that physical switch brings with it significance and sentiment, according to Executive Director Trudy Wilson, who likens the move to getting an early Christmas gift, only this one doesn’t need to be wrapped.

What it does need, however, is a little help from a lot of people come Monday.

While the center has received donated services to move out of its present location in Suite 202, One Ross Park, 380 Summit Ave., in the Trinity Medical Center East area, it needs volunteers to unload and unpack on the other end, at what is its new location at 423 South St., the site of the former Neighborhood House Daycare and Preschool building.

“If you want to volunteer, be here to stay however long you can or want to, and we’ll be here until about 6 that evening,” she said.

Wilson anticipates the move will be completed by day’s end, clearing out of the Ross Park Professional Building where the center has been since February 2014. It moved there from its original location downtown at 701 N. Fourth St., a relocation necessitated because of roof issues.

“We got a bid from a mover, and the mover sent the bid back and said they wanted to donate it (their services) in exchange for an ad in the gala program,” Wilson explained.

“It’s like God works every single piece out — it’s been so cool,” Wilson said in describing how things have been falling into place.

Helpers of all ages and skill levels are welcome to participate in the move Monday, according to Wilson.

“People can help take things out of boxes or put things together or put things on shelves. We will have things for everybody to do,” she said.

“It’s a whole new beginning that’s going to build on the good past that we’ve had,” she said.

As the first phase of the health center’s three-year, $1 million expansion project comes to completion, the center is ready to move into its newly renovated facility downtown. The center purchased the former day care building in April 2017. The renovation began Sept. 4.

“If we don’t have enough helpers, we’ll just have to work harder,” Wilson said, explaining the center continued to see patients through Wednesday. Thursday promised “a “big pack day” and Friday, “we wait for our final inspection and our occupancy permit and then Monday we move everything,” she said in a recent interview.

“We will open our new facility the first week of January, and the first patient is scheduled to be seen in the new location on Jan. 7,” Wilson noted.

“This is the moving into the house, celebrating Christmas, making sure the house is set up for company, and then we start,” Wilson said of the time span between Monday and seeing patients for the first time there.

“The 4,800-square-foot facility houses six exam rooms — representing an increase of four additional exam rooms — which will enable us to see more patients overall, and allow for multiple providers to treat patients simultaneously,” Wilson said. “One of the exam rooms will be outfitted as a procedure room in which EKGs, wound care and minor surgical procedures will be done,” she added. “The addition of retired general surgeon and primary care Dr. Anandhi Murthy to our volunteer provider staff has enabled the health center to provide wound care and minor procedures to our list of services we offer to our patients,” she continued. “The increased treatment space along with the convenient location at 423 South St. will provide us the opportunity to reopen a walk-in care center in the near future.”

Wilson said Grae-Con Construction, led by its president, Bob Gribben, is the general contractor and has been “a fantastic supporter during the building process.”

“Grae-Con has generously donated a great deal of time, effort and resources to make this project a reality,” Wilson said. “Our construction site superintendent, Larry Bishop, who has worked for Grae-Con for several years, is planning to retire upon completion of the the health center project. He noted that he was happy to be doing a project such as the OVHC renovation as his final assignment for Grae-Con,” she said. “Larry has been a joy to work with throughout the construction process. He walked me through a few construction hurdles with kindness, positivity and graciousness. I knew when Mr. Gribben took on the building project and when Mr. Bishop oversaw the construction process, I was in great hands. I don’t know many people who can say their building project was a joy, but I can sure say that,” Wilson said.

In addition to Grae-Con, many subcontractors have made in-kind donations through materials, resources or labor in support of the work OVHC does for low-income, uninsured patients, according to Wilson. “This has really helped keep the cost manageable for the health center, because the construction cost has been in addition to our annual operating costs that must be raised each year,” she said.

The renovation/building project has truly been a team effort, according to Wilson.

“We are grateful for the many large financial and in-kind contributions that have made this dream a reality, from organizations such as the Mary Jane Brooks Charitable Foundation, the J.C. Williams Charitable Trust, Apollo Professional Cleaning and Restoration, Jewish Community Foundation, Steubenville Electrical LMCC, Pugliese Charitable Foundation, Grae-Con Construction, Richmond Engineering, Starkdale Presbyterian Church, Shremshock Architects, Korda Engineers and Kalkreuth Roofing,” she said, adding, “Several of our current board members have made significant financial contributions as well, because they believe in the mission of the free clinic.”

In addition to the exam rooms, the facility is home to an onsite laboratory, conference room, onsite storage area and administrative offices.

“We are so thankful to have everything under one roof now; however, we are also going to miss being housed in the Professional Building at Trinity Health System,” Wilson said. “Trinity has been abundantly generous with the health center in providing free space in which we saw patients for almost five years after the collapse of the roof at our Fourth Street location. We have made many friends while at Trinity and will definitely miss running down to the cafeteria or gift shop to purchase lunch items or pick up a few personal items. We look forward to Trinity’s ongoing commitment of support in other areas as we make this transition to a new facility,” she said.

The new location brings another bonus.

“Additionally, we will now have space to expand our onsite med-room servicing our own patients into a community pharmacy for uninsured patients within 300 percent of the Federal Poverty Level, no matter from where they have a prescription,” she explained. “We hope to have this expansion in place within the next six months to help more people in the downtown area be able to get their prescriptions filled at little or no cost. This pharmacy expansion comes at a great time after the closure of Rite Aid Pharmacy in downtown Steubenville,” she said.

“We look forward to serving the Ohio Valley by increasing our footprint in the services we provide to low-income, uninsured and underinsured patients in our new location,” Wilson said

Returning to the downtown means the center will have a presence nearer to its target population.

“People don’t have to try to find us in the midst of other things,” Wilson said. “We’re down here, a presence, a footprint in the downtown area. Something I think that is really important is we’re back within walking distance for a lot of people who had to either get a bus or climb the hill, and we did have patients who would walk up the hill to come to their appointment so we’re here on a busline area, and soon we’re going to be able to open back up into a walk-in clinic so that provides more access to care within just blocks of where people live instead of having to go to an emergency room or something like that,” Wilson explained.

For the interim, the health center will maintain its current hours, from 8 a.m. to 4 p.m. Monday through Thursday. Ditto for its phone number — (740) 283-2856 — and its website, www.ovhealthcenter.org

“We may start expanding our hours once the volume increases, because we’re going to be able to see so many more patients, and once we start doing walk-ins, we’ll have more patients, so we’ll start building some walk-in clinic hours and then by then, we’ll need to expand our hours as well,” Wilson said.

The reconfiguration of the space from daycare to health center is nothing short of incredible, in Wilson’s estimation.

“It’s an amazing transformation,” Wilson said. “We have used every square inch in the place that we could possibly use.”

A grand opening and open house are on the new year horizon.

“We want to get in and get settled a little bit more,” she said. “We’re going to be in before all our signage is ready and our plaques to honor the people who have given such big donations, so it’ll probably be February-Marchish before we have a community grand opening/open house kind of thing,” Wilson said.

Asked what she wanted most to get across to readers, Wilson responded, “We want to be an organization for the community, so we welcome people to come in and just take a little tour of what we have, what we offer, see how we may be able to help them or someone they know in their family. We try to keep enough supplies and resources on hand that if somebody has a great need, that we’re able to help supply that need,” she said.

“For example, if one of our patients has a need for a family member for a cane or crutches, we try to accommodate those family needs as well. We want our patients to be able to have crutches for free if they need them so we want to be part of the community, part of the downtown revitalization effort. We want to expand and do even more once we’re in here and settled.”