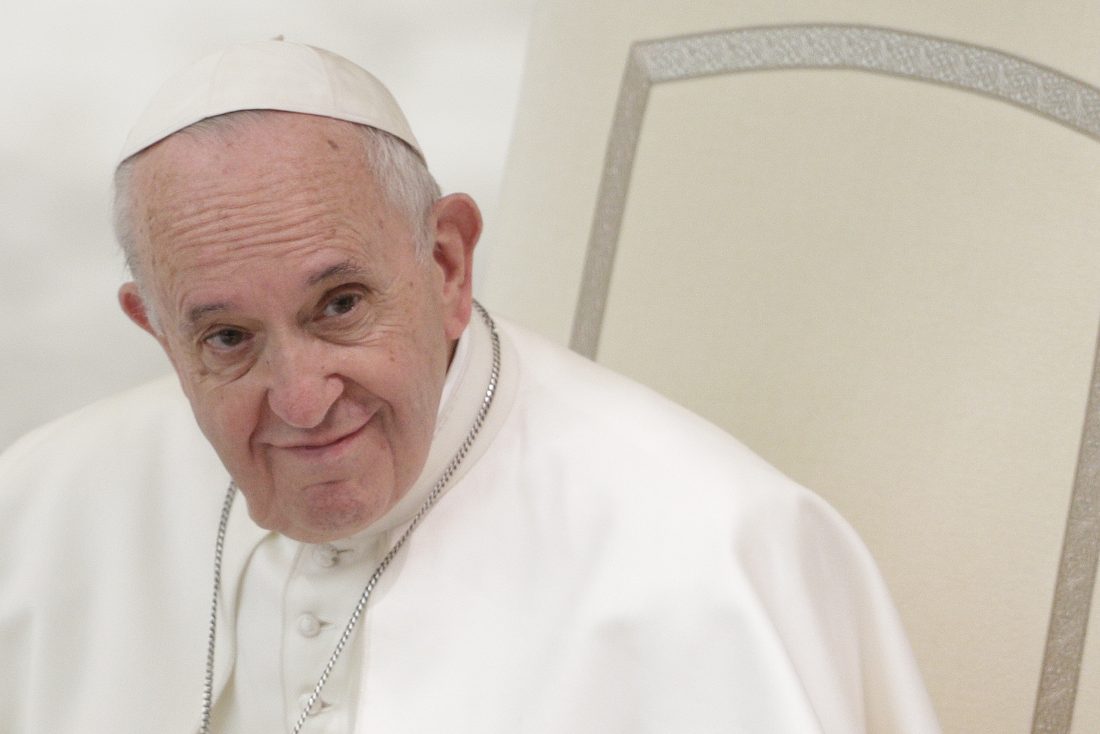 Pope Francis attends an audience with participants of a course on the Internal Forum promoted by the Apostolic Penitentiary Court, in the Pope Paul VI hall, at the Vatican, Friday. -- Associated Press

VATICAN CITY (AP) — Pope Francis has issued sweeping new sex abuse legislation for the Vatican City State and Vatican diplomats that requires the immediate reporting of allegations to Vatican prosecutors, as he seeks to create a model policy for the Catholic Church.

The mandatory reporting provision, while limited in scope to Vatican officials, marks the first time the Holy See has put into law requirements for Catholic officials to report allegations of sex crimes to police or face fines and possible jail time.

Francis also issued child protection guidelines for Vatican City State and its youth seminary, acting after the global sex abuse scandal exploded anew last year and The Associated Press reported that the headquarters of the Catholic Church had no policy to protect children from predator priests.

While the new norms only cover Vatican City State, affiliated institutions and the Holy See’s diplomatic corps, they were still symbolically significant and were welcomed by a former seminarian whose case helped spark the reform.

“I see this as something positive,” Kamil Jarzembowski told the AP.

The law for the first time provides a Vatican definition for “vulnerable people” who are entitled to the same protections as minors under church law. The Vatican amended its canon law covering sex abuse to include “vulnerable adults” in 2010, but never defined it.

According to the new Vatican definition, a vulnerable person is anyone who is sick or suffering from a physical or psychiatric deficiency, isn’t able to exercise personal freedom and has a limited capacity to understand or resist the crime.

The issue of whether “vulnerable people” can include seminarians, religious sisters or other adults who are emotionally dependent on clergy has come to the fore in the wake of the scandal over ex-Cardinal Theodore McCarrick, a once high-ranking American cleric who molested seminarians, and revelations of priests and bishops around the world sexually preying on nuns.

The new law covers all personnel who live in or work for the Vatican and any abuse that occurs in the Vatican, the 44-hectare (110-acre) city state in the center of Rome and its other territories, as well as the Holy See’s vast diplomatic corps.

The Vatican’s own ambassadors have figured in some of the most scandalous cases of sex abuse in recent years, with papal representatives accused of groping, distributing child pornography and sexually abusing minors in their far-flung posts.

The provisions to punish them criminally are now contained in the city state’s criminal code, and are separate from the canon law which also imposes canonical penalties, such as defrocking, for predator priests worldwide.

The law now requires any Vatican public official who learns of an allegation of abuse within the law’s jurisdiction to report it to Vatican prosecutors “without delay.” Failure to do so can result in a fine of up to 5,000 euros ($5,615) or, in the case of a Vatican gendarme, up to six months of prison.

Information obtained during confession is exempt from the reporting requirements, in keeping with Catholic doctrine.

“With this document the Vatican wants to send a message that it takes these crimes seriously, wants to prosecute them, to avoid cover up, and also to create an atmosphere that prevents these crimes from happening in the first place,” said Ulrich Rhode, a canon law professor at Rome’s Pontifical Gregorian University.

Anne Barrett Doyle of BishopAccountability, an online database about clergy abuse, said any law that protects even a single child is to be applauded. But she faulted its limited scope as reinforcing the Vatican claim that it is only responsible for protecting children in the city state.

Francesco Zanardi of the Italian survivor advocacy group Rete L’Abuso (Abuse Network) echoed her call, saying: “If minors have the luck of being abused in the Vatican City State, their rights will be protected. Outside, we can’t do anything.”

Many of the law’s provisions answer longstanding victim complaints about how they are treated by the church, while also ensuring that the accused are entitled to a defense and efforts to restore their reputations if the claims are not substantiated.

The legislation requires that victims be welcomed, listened to and provided with medical, psychological and legal assistance, and sets the statute of limitations at 20 years past the victim’s 18th birthday.

They must be kept apprised of the investigation, a significant point given that victims are usually kept in the dark about canonical sex abuse investigations.

Victims and their families are to be protected from any retaliation. Jarzembowski, who reported abuse at the Vatican youth seminary, was kicked out the following year.

Mimicking some provisions in place in the U.S. church, the guidelines require background checks for Vatican staff and volunteers working with minors and calls for safe environment training for all Vatican personnel.

The Vatican’s editorial director, Andrea Tornielli, acknowledged that very few children actually live in the Vatican City State. But he said Francis decided to make the legislation and accompanying guidelines a model.

Last year, the AP reported that Vatican City had no policy to protect children, even though the Holy See required such policies in Catholic dioceses around the globe and had told the U.N. in 2013 that such a policy was in the works.

The absence of clear-cut policy became evident following revelations that Jarzembowski, then a teenage seminarian in the Vatican’s youth seminary had, in 2012, accused one of the older boys of sexually molesting his roommate.

Nothing came of it. Vatican police, who have jurisdiction, weren’t called in to investigate. A series of bishops and cardinals said they investigated, but no one ever interviewed the alleged victim. The accused was eventually ordained a priest.

On Friday, Jarzembowski told the AP the law answered many of the loopholes into which his case fell, particularly its recognition that the youth seminary falls under Vatican jurisdiction.

“Before, there was a situation where a group of kids were there, in the Vatican City State, but they were seemingly in a legal limbo,” he said.