A big day in the life of Urban Mission Ministries

60th anniversary to be celebrated Friday at Seventh Street Plaza 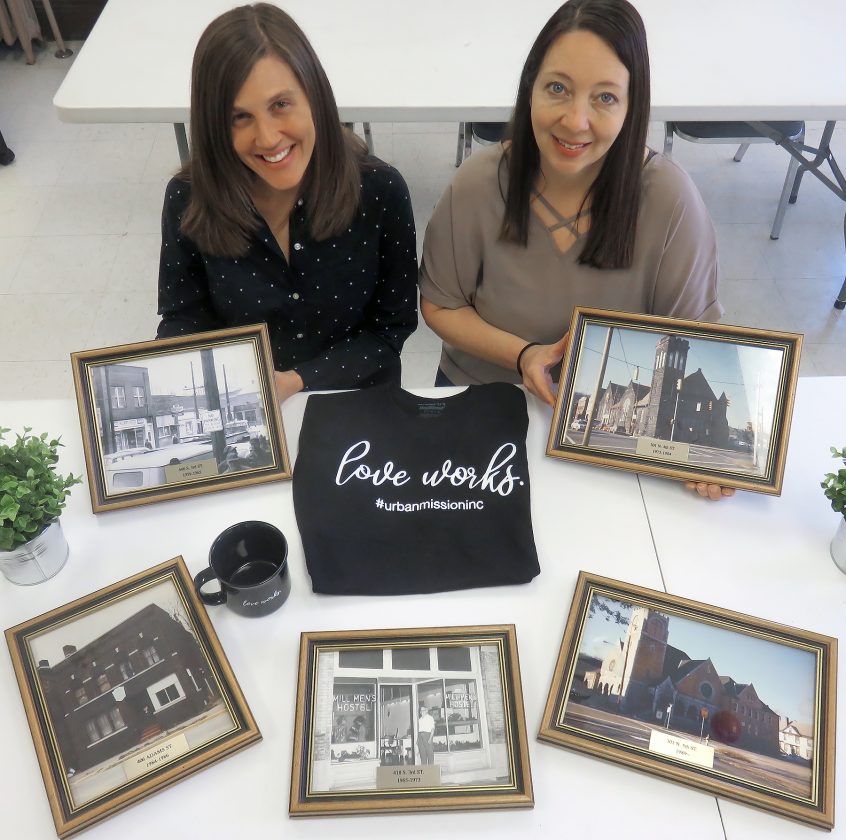 GETTING READY — The Rev. Ashley Steele, left, executive director of Urban Mission Ministries, and Tiffany Beckwith, the mission’s community engagement director, show some old pictures from Urban Mission’s 60-year history that will be informally celebrated Friday beginning at 5 p.m. at the Seventh Street Plaza, 260 Seventh St. There will be hearty appetizers, special displays and announcements. There are no tickets to purchase to attend Friday’s event but an RSVP would be appreciated. That can be handled by contacting Vanessa Slappy at (740) 282-8010 or by e-mail to vslappy@urbanmission.org. -- Janice Kiaski

STEUBENVILLE — Friday is a big day in the life of Urban Mission Ministries.

It brings an informal but no less significant 60th anniversary celebration at the Seventh Street Plaza, 260 Seventh St., beginning at 5 p.m. with drinks and hearty appetizers.

The Rev. Ashley Steele, executive director, and other mission representatives invite the public to stop by and check out special displays, then hang around for the 6 p.m. program, a time of stories from the past and a vision cast for the future.

And a special announcement or two to boot.

Come Friday, the mission hopes it can report that it’s signed on the dotted line to buy the plaza, home to what includes not only the site of the former Kroger and Save-A-Lot grocery stores on the corner of North Seventh and North streets, but what houses several thriving businesses, too.

The price tag is “a little more than $1 million.”

The mission also hopes to announce a goal to raise $325,000 has been successful as part of the overall effort to expand the ministry’s footprint.

So far, about $121,000 has been generated thanks to local donors, Steele said, but a new twist in the mix is the potential to apply for a grant for up to $250,000 if matching funds are available by the end of April.

“To receive this grant would be life-changing for our ministry,” Steele said. “We believe this opportunity has the potential to impact the lives of thousands of individuals throughout the Ohio Valley. With this grant contingent on matching funds, we are asking for your support now more than ever.”

Sixty gifts for the 60th anniversary, she noted.

“Do you know someone who might be able to help us make this match? If so, we invite you to share this exciting news with them,” Steele said. “Please let them know this program will serve families living in Harrison, Belmont, Carroll and Jefferson counties in Ohio as well as Brooke and Hancock counties in West Virginia.”

She added, “It our hope to meet our goal by our 60th anniversary celebration.”

Ambitious maybe, but Steele noted God has been good throughout the mission’s six decades of service.

“There’s a little bit of pressure to have good news to share, but God already has been so faithful, and so we’re just trusting at this point,” Steele said. “We walk in faith and know that for 60 years, God has been faithful, so why would we doubt that that’s not the case now?”

The plaza is being purchased from businessman Sonny Jani of Pittsburgh, according to Steele. Since last year, the mission has been leasing to own it, using the vacant space for some giveaways, but nothing akin to its intended purposes.

“Where we are is that the current owner of the plaza wants to close on the same day as our celebration, and that was a date that I think he had picked, which it happens to be a big deal for us,” Steele said with a grin, “so we’re really working toward that, not only preparing for the celebration, but also to begin this new chapter for Urban Mission. It’s a very symbolic day, a very celebratory day, but there’s a little bit of work that we have to do leading up to it and certainly afterward, but it’s all exciting because it’s new, but really, we are building on the foundation of those who’ve come before us and laid that foundation for us to build from.”

The Urban Mission began as the Mill Men’s Hostel in 1959 and has grown to become the largest charity in the Upper Ohio Valley. An ecumenical Christian social service agency founded by and directly related to the United Methodist Church, the mission exists “to be a concrete witness of the love of God through the continuation of the ministry of Jesus by serving the needs of the poor and disadvantaged.”

“Since 1959, the Urban Mission has been serving the people of the Ohio Valley,” Steele noted. “Every year, more than 2,800 families from Harrison, Jefferson, Belmont and Carroll counties utilize one or more of our services. From food and shelter, to clothing and school supplies, the Urban Mission remains committed to serving the needs of our community’s most vulnerable,” she said.

“In recent years,” she continued, “we have broadened our ministry footprint and expanded our programming to include life skills training and job readiness programs. Not only do we see it as our role to help families address their emergency needs, but we also see the importance of providing families with the tools and resources to become self-sustaining as well. It is our goal to help people break out of the cycle of poverty and live the abundant life, as God intended,” Steele said.

Since its beginning, Urban Mission has been operating in scattered ministries sites throughout downtown Steubenville, but purchasing and renovating the local shopping plaza with more than 30,000 square feet of reprogrammable space downtown would be a dream finally realized, according to Steele.

The vision is to use the new space to serve as a hub for the community to gather, learn, serve and work, Steele said. “Not only would we be able to provide expanded access to fresh and affordable food, but we would now have the space to offer job training, employment opportunities and more.”

The space could accommodate a Unity Kitchen, featuring an industrial-sized training kitchen to serve the dual purpose of providing meals and a culinary arts training program; social enterprises with training and employment opportunities through the creation of a retail center, grocery store and child care facility; and a Jobs for Life training center, a space dedicated for programming such as GED preparation, job readiness and basic life skills.

“We set our goal to raise $325,000 as we begin and that was for the down payment and some early renovation funds so that we could just start the process,” Steele said. “We have received already about $120,000, and we’ve been able to raise this really through the generosity of local donors, which is really a blessing,” she said.

“We are glad to report that we have already secured financing with a local bank and are now working to finalize plans for the interior,” she said, noting the mission is excited to work with People’s National Bank in Mount Pleasant.

“They have caught the vision and would like to come alongside of us for this endeavor, and right now we’re just working on the down payment as well as just some early renovation monies so that we can start to utilize the building fully,” Steele said. “We’ve been using the building a bit for different giveaways and things like that, but nothing that we have done there so far is what we’ll do in the future. We’ve just used that space since we’ve been leasing to own for this entire year,” she continued.

Being in the plaza where there are existing viable businesses is a win-win, according to Steele.

“For us, we see that as an opportunity to continue to build upon the economic development that’s taking place here in the downtown area, so we want the businesses to remain for sure, and then for us, we don’t like to see an empty storefront like the space that we’ll be moving into, so if we can fill that with what we think will also be an economic development tool for the community, then we see that as a positive for the people we serve and also for the community as a whole,” she said.

“The other side of that is this is new territory for the mission to take on something such as this, but we see it as a tool to help us become self-sustainable also,” Steele said. “That’s the goal we have for the folks we serve, and so we see that as our goal as well, and while we’ll continue to need the support of the community from a donation standpoint, we also know it’s helpful for nonprofits to diversify their funding. That way they can continue to do work in the community, and so by venturing into this territory, any funding we will get from these entities will go back into our work like the Jobs for Life program,” she said.

There are no tickets to buy to attend Friday’s event, but an RSVP would be appreciated. That can be handled by contacting Vanessa Slappy at (740) 282-8010 or by e-mail to vslappy@urbanmission.org. Those attending will have an opportunity to invest in the mission’s future.

Friday’s event is expected to bring together people from all different times in the mission’s history, “some folks from our past, present and hopefully future who will just be able to come together and celebrate,” Steele said. Attendance from past employees and directors of Urban Mission is anticipated.

Tiffany Beckwith, community engagement director, is chairing the event, working on displays with an industrial theme to showcase the different decades of the mission’s history.

There will be pictures; the “Coffee was always hot” mugs in tribute to the mission’s beginning theme; and “Love Works” T-shirts for the mission’s present-day one.

“It’s been fun for us already this year to be able to see how far we’ve come but then think how far we get to go, and it’s been exciting,” she said.

“I feel like a historian looking in archives,” Beckwith said. “One of the most fascinating things I had found was a director had written dreams for the future and seen them come to pass.

“It’s good for us to create our dreams for the future so when they have their 120th anniversary, they can remember Rev. Ashley had this dream,” Beckwith said.