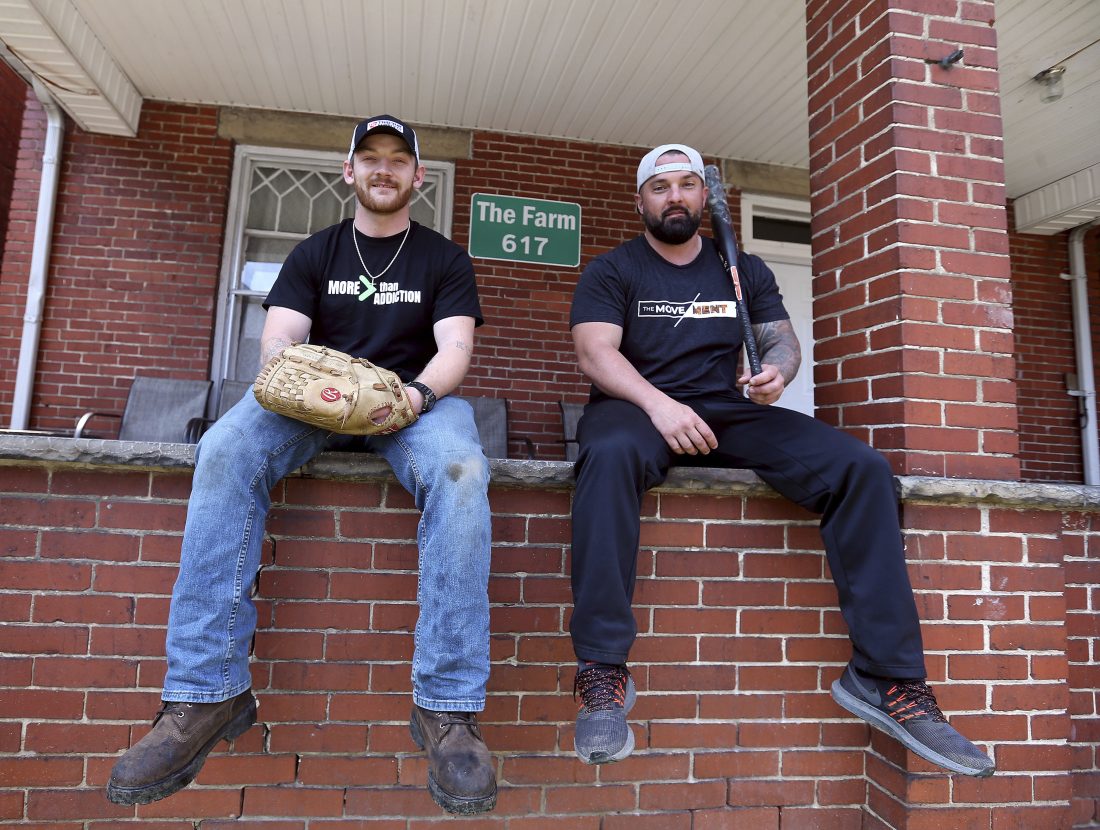 PLAY BALL — In this April 10, photo, Adam Foster, left, and Craig Hettlinger have organized a 10-team softball league for recovering addicts in the Huntington area and are in search of donations to get the league off the ground. -- Associated Press

HUNTINGTON (AP) — The temperature had just eclipsed 70 degrees as Craig Hettlinger and Adam Foster conversed on the porch of “The Farm,” a house that hosts a 60-day program for individuals who are taking the first steps in recovery from drug and alcohol addiction. One baseball bat and a glove were a few feet in front of them.

Much like those in the house, Hettlinger and Foster were starting on a new journey, too, forming a softball league for individuals recovering from drug and alcohol addiction.

Hettlinger is now the director of the LifeHouse Farm Program, but was once a recovering addict himself, and knows firsthand the struggle that comes with finding, living and remaining free of addiction.

His recovery journey began in 2013 after he was incarcerated at Western Regional Jail, picked up by a friend and taken to a facility in Richmond, Virginia. When he later returned to Huntington, he relapsed several times until becoming a part of the LifeHouse Ministry. About 14 months ago, Hettlinger came clean.

As a leader in the recovery community now, he said he’s constantly looking for new ways to show the “fun” side of sober living, coinciding with the program’s mission to show those who haven’t found or are struggling to find joy on “that side of life” and showing them the way out of addiction.

“We’ve talked about different things for a long time, and we wanted to do something to unify the recovery community,” Hettlinger said. “There are some great things happening with recovery in Huntington, but we felt like we were missing something. We needed a good release from the grind of everyday life, and softball seemed like it was the most appropriate thing to get together for this time of year.”

Hettlinger is spearheading the project with Foster, his friend and also a recovered addict. To have an idea is one thing, but acquiring the necessary equipment to have a successful league is a much larger task — especially given that they were essentially starting from scratch.

He turned to Facebook in search of donations of balls, bats, gloves and almost anything else people were willing to give to get the softball league off the ground. The post was shared over 300 times in the first two days, and almost before he realized it, Hettlinger had pulled in several pieces of equipment and a few area businesses also donated gift cards to Dick’s Sporting Goods so he and Foster could pick out brand new equipment.

According to Hettlinger, the items will be distributed between the 10 teams so each group has an equal amount of gear once all donations are received.

“I wanted to thank the community as a whole because (they) really reached out to us and made this thing possible,” he said. “Don’t tell me that our community doesn’t care because the overwhelming majority of them do, and they are making this thing happen. It’s a cool thing to be a part of.”

Hettlinger said the league will play games at Bar Field off James River Road for eight to 10 weeks, with a tournament ending the season and a traveling trophy to stay with the winning team until next year. The softball league is something he hopes to continue for many years to come.