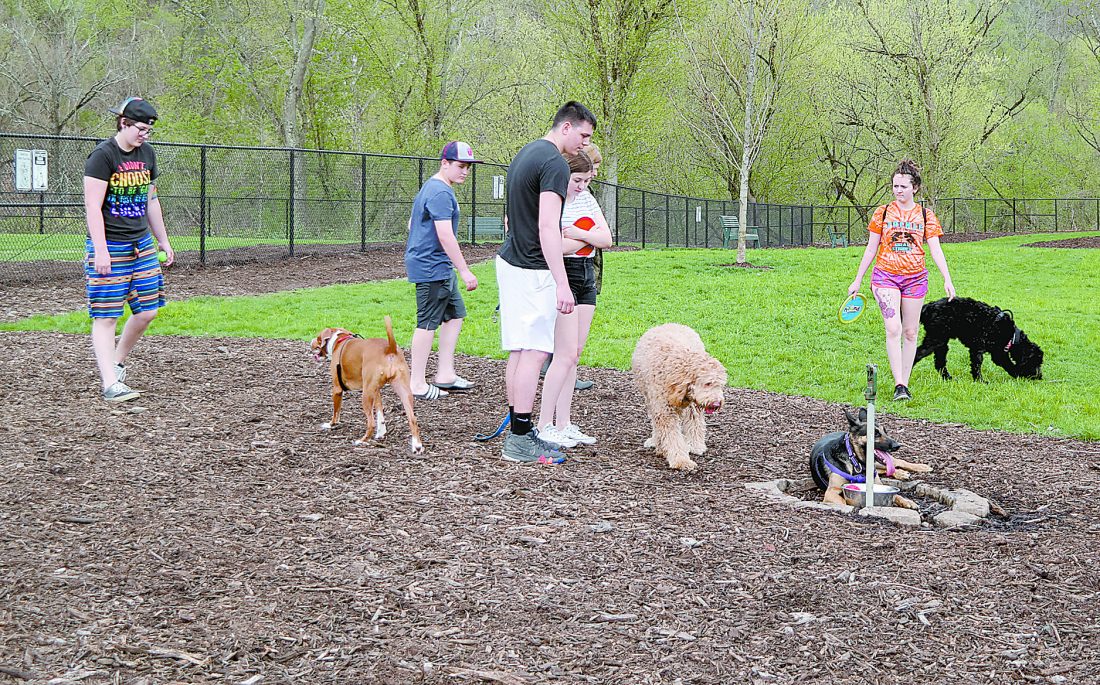 Alex Meyer GOING TO THE DOGS — People and their canine companions enjoy the green space at Wheeling’s Fitzsimmons Family Dog Park on Thursday.

WHEELING — Tails were wagging again at Wheeling’s dog park on Thursday afternoon after the facility reopened the day prior.

The Fitzsimmons Family Dog Park, closed since November for drainage work and other repairs, reopened Wednesday morning to the delight of many Friendly City canine companions and their owners.

“We’re grateful,” Wheeling resident Joe Heatherington said of the park reopening. “We’re here twice a day. We come in the morning and evening.”

Heatherington attended the park alongside Lulu, a hound dog, and Jackson, a beagle-boxer mix, that appeared excited to run around on the park’s fresh mulch.

“It was kind of a burden when it was down because we had to take them to Oglebay a lot,” he added.

“This is one of the things I’ve gotten the most calls on in the last couple weeks,” he said. “I’m happy to say that thanks to (Rusty) Jebbia and his crews, the dog park will be open.”

Jebbia, Wheeling’s public works director, said the city worked on the park throughout the spring. The park closed Nov. 5 because the ground was too wet and muddy.

“A wet spot was creating a problem for all the dogs, getting really muddy,” Jebbia said. “We wanted to wait for the ground to dry up.”

City crews installed a French drain system in the park, which should keep the facility dry throughout the summer, he said. Crews also planted grass seed, fertilized the grass and replenished mulch on the property.

The dog park opened in October 2017 and features two sections for larger and smaller breeds with separate water and waste stations.

The park, located at the Tunnel Green Recreation Complex, can be accessed from 18th Street by car and the Wheeling Heritage Trail on foot.

The park previously saw another closure in March 2018 after glass surfaced on the ground at the site. After the city placed new sod paid for by the Fitzsimmons family, the park reopened in July.

“This is the first time we’ve been here,” Wheeling resident Melinda Zoladz said alongside her goldendoodle, Sophie. “We’ve been patiently waiting for it to open. We came here a couple times when it was closed.”

Jebbia added that the city still needs to complete other work at the site, including fixing potholes in the parking area and repairing the adjacent roadway.

“I’m happy it’s open, and I know there’s a lot of people who were anxious for it to open,” he said. “I’m a dog owner, my daughter dog is owner and they love it over there. It’s been a great addition to our city’s parks and recreation.”