Show of Hands finalists have been announced

Winners will be named on May 22 at Wheeling Artisan Center 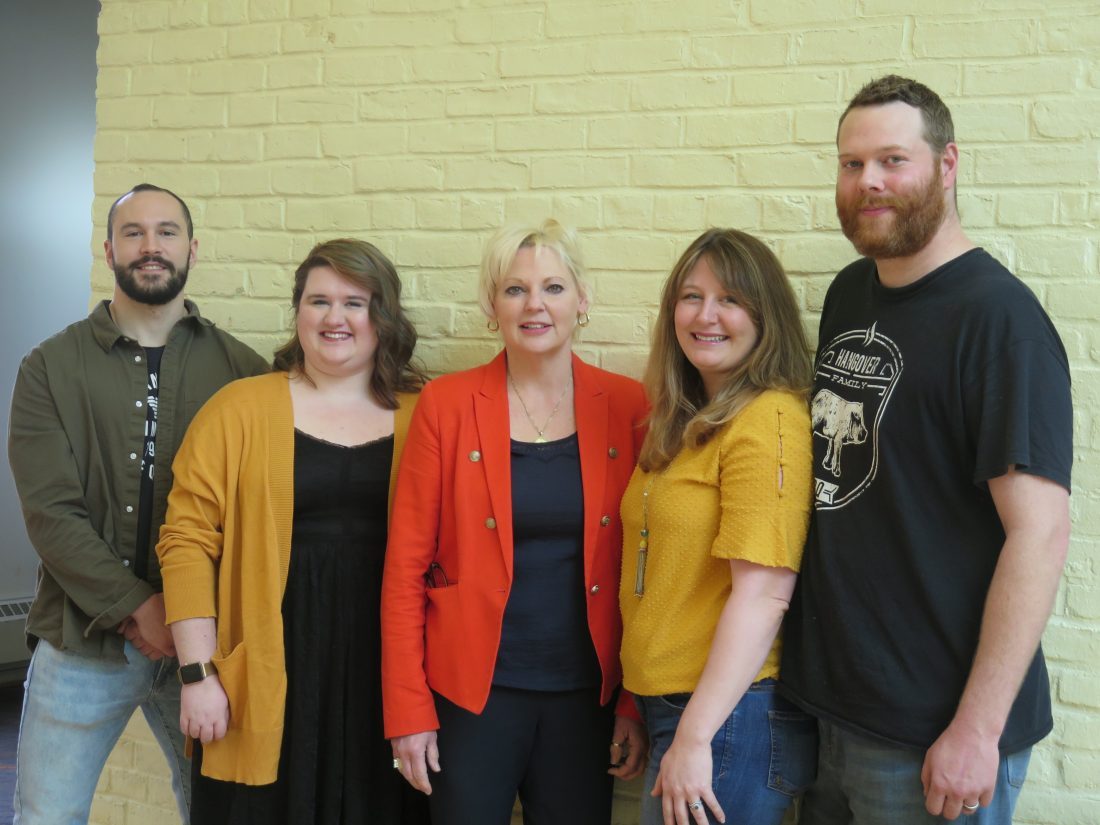 MONEY TO EXPAND — Finalists for the May 22 “Show of Hands” event sponsored by Wheeling Heritage gather for a pre-event meeting Tuesday at the Wheeling Artisan Center. Pictured from left are Zeke O’Connell, owner of the Real Gym in Fulton; Sarah O’Leary, owner of the Honeycomb Salon; Lisa Neilson, owner of Your Place or Mine Resale and Consignment Store; and Stephanie and William Litman, owners of the Hangover BBQ carryout. -- Joselyn King

WHEELING — Owners of a hair salon, a furniture consignment shop, a “hard core” gym and a traditional barbeque carryout will compete for money to expand their business at the upcoming “Show of Hands” competition in Wheeling.

Finalists selected for Show of Hands, set for 6 p.m. May 22 at the Wheeling Artisan Center, gathered Tuesday morning for a pre-event meeting there. The owners will make business presentations at the event, telling attendees how an influx of funds would help them expand their operations

The public is invited to attend and pay $5 to vote for the project they feel is the most worthwhile. The winning presenter will leave with about $4,000, including all of the funds raised at the door, for his or her business expansion. Orrick, the program’s corporate sponsor, donates $1,000 to each event.

The following businesses will be making presentations at Show of Hands, organized by Wheeling Heritage.

¯ Hangover BBQ — Stephanie and William Litman opened Hangover BBQ off Route 88 in Greggsville, and it has become a popular spot — so much so the food items prepared often sell out quickly.

The Litmans want to buy a walk-in refrigeration unit and an additional food warmer, so that more food can be prepared. Some outdoor seating for the carryout venue might also be considered, she said.

Hangover BBQ offers ribs, pulled pork, turkey and other meats smoked with local cherry wood. No chemical accelerants are used to start the fire, according to William Litman.

¯ Sarah O’Leary recently purchased the former Hats Off Salon at 101Washington Ave., and renamed it the “Honeycomb Salon.”

O’Leary would put any winnings toward making her salon more eco-friendly. She explained chemicals used in the salon can be recycled and used by those cleaning oil spills. She also wants to buy eco-friendly faucets, and energy efficient washers and dryers.

Her husband, Vincent O’Leary, is an environmental scientist.

¯ Zeke O’Connell opened The Real Gym in 2016, wanting to establish a “hardcore” gym with free-weights and loud music. There are no rules at the gym, except to be respectful of others and put equipment away when finished.

“Gym like this had a profound impact on my own life,” he said.

The gym, located in Fulton, currently has about 80 members. O’Connell wants to expand his gym, with the goal of providing group training to youth and high school athletes “at an affordable rate.”

¯ Realtor Lisa Neilson soon will be opening Your Place or Mine Resale and Consignment Store, a higher-end home furnishing and decor consignment store to be located on Edgington Lane. She is presently taking items in anticipation of the move, and storing them in her garage.

Neilson said any money she wins would be put toward the start-up of her business. She recently moved back to Wheeling after being away from the area for a decade, and has years of experience in sales, home staging, home decorating and organization areas.

Alex Weld, spokeswoman for Wheeling Heritage, said the group of finalists represents the most diverse list of businesses that have competed against each other in Show of Hands. She said the organization received about 10 applications from those wanting to compete.

Wheeling Heritage looks for business owners and entrepreneurs who will most benefit from the funds won by the competition, she said.

So far, Show of Hands has given more than $58,000 to support small businesses and projects in Wheeling, according to Weld.