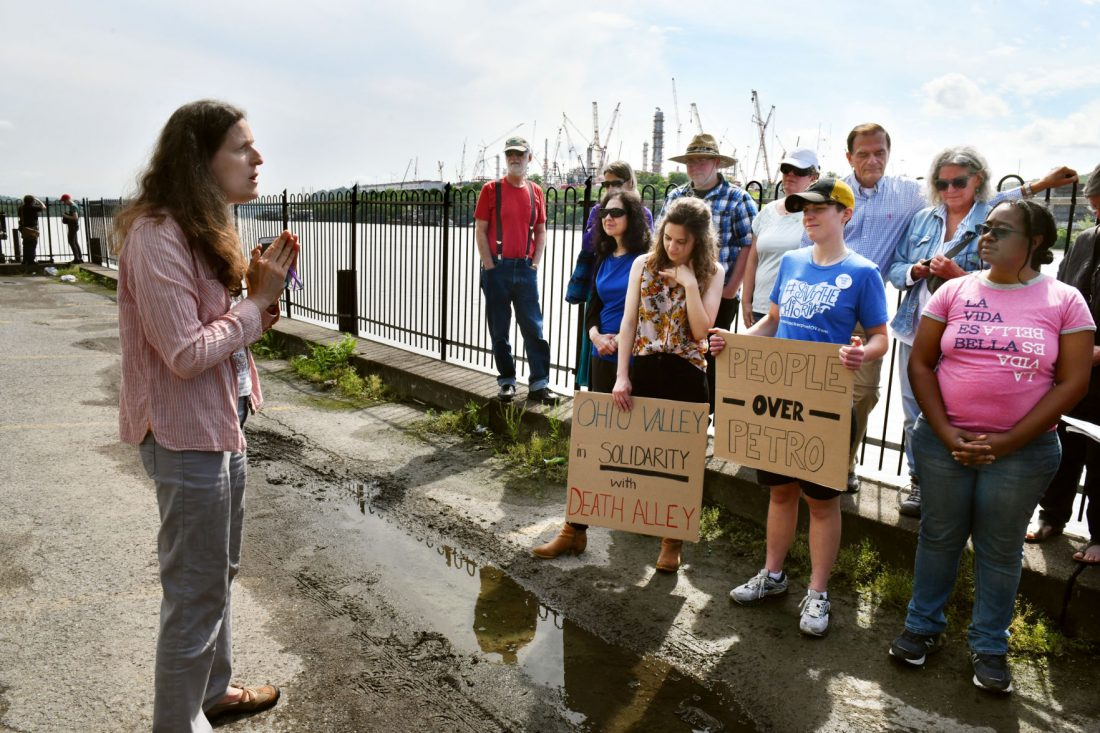 ENVIRONMENTAL CONCERNS — Elisa Beck, founder of Sustainable Monroeville, encourages the group from Ohio Valley Environmental Coalition to work toward a regenerative future as they stop in Vanport, Beaver County, to view the ethane cracker plant being constructed across the Ohio River in Potter Township. -- Mark Marietta

“This tour has been a real eye-opener,” he said Friday afternoon. “Look out the window and what you see should be beautiful, should be pristine. You see areas that aren’t green. You see a lot of damaged roads and probably a lot of damaged lives for people brave enough to live there.”

Ketyer, a leader with the environmental support group Climate Reality Project, was lamenting what he regarded as casualties from heavy industry that still has a significant presence in the Ohio Valley. He was among a group of 30 who coursed through this part of the tri-state area on a bus, glimpsing and stopping at industrial sites along a 100-mile stretch.

And the sites were many.

Ohio Valley Environmental Coalition organized the bus tour. The nonprofit, formed in 1987 and based in Huntington, W.Va., is a grassroots organization of volunteers who work to raise awareness of environmental issues.

Many of their contentions, to be sure, conflict with statements by industry officials, such as fracking is usually done safely and greenhouse gas emissions have been cut dramatically. One natural gas producer recently established a goal of zero emissions.

The event began in Robinson Township, advanced to Beaver County, then navigated Ohio and West Virginia roadways that hugged the river south to Proctor.

Twenty minutes into the tour, shortly after the bus crossed into Beaver County on Interstate 376, Karen Gdula picked up the microphone and talked about “my nightmare that became reality.”

She pointed to a barren hillside to the east where, last Sept. 10, the Revolution Pipeline burst following a landslide, sending flames aloft a short distance from the home where she grew up and which she now owns. One house and several garages and vehicles were destroyed.

“As a child, I had a nightmare that the woods behind my house were on fire,” Gdula said. “Then we had this fire in September. The flames were probably 300 feet high. It was very intense.”

Early in the journey, organizers passed along a jar containing polyethylene pellets, “the building block for plastics,” one said. These so-called “myrtles” are a vital product for the much-celebrated Pennsylvania Shell cracker plant that is under construction in Potter Township, Beaver County.

This type of facility processes ethane, a component of natural gas that is prevalent in the nearby Marcellus Shale, and processes — or “cracks” — it into ethylene.

Wheeling down Interstate 376, the bus passed over the $6 billion project, which is brimming with activity and with construction cranes, including one that is believed to be the tallest in the world. The plant is a polarizing endeavor, one the oil and gas industry embraces, but which concerns environmental advocates.

“Ethane is colorless, odorless and extremely flammable,” said Terrie Baumgardner, a Beaver County resident. “I started reading about cracker plants in 2010 and thought this would be good for Beaver County, because it was economically depressed. But after reading for a few weeks, I decided I was wrong.

“This plant,” she contended, “will produce plastics and climate change.”

Plastics and emissions were recurring themes throughout the trip. A number of speakers lamented that many plastic products are used once, then discarded. They recommended limitations on these items — especially grocery bags.

“We have to support renewables and alternatives (as energy sources),” one speaker announced. “We have to reduce the use of plastic. It’s too much plastic.”

Emissions raise cancer, cardiovascular, radioactivity and other concerns. Bob Schmetzer, who worked in several facilities that were on the tour, referred to the ongoing mystery of the Ewing Sarcoma cases in a four-county area of Southwestern Pennsylvania that includes Washington.

“Twenty-seven cases,” Schmetzer said. “That’s not a random occurrence in my opinion.”

The tour went on to include the Beaver Valley Nuclear Power Station (which may close within two years), ATI Allegheny Ludlum (Midland) and Little Blue Run — the nation’s largest coal ash impoundment — before leaving Pennsylvania.

“There’s a claim that nuclear plants don’t pollute. They do.” Schmetzer opined.

The second half of the tour wound along the river through eastern Ohio and the West Virginia panhandle. It included a coal-fired power plant and Marshall County Coal Co. — owned by Murray Energy Corp., the largest privately owned coal firm in then U.S. There also were a couple of fractionators, a plastics producer (Covestro) and . . . the site of a proposed ethane cracker plant.

Firms from Thailand and South Korea are planning to build the PTTGC ethane cracker on a barren 900-acre site in Dilles Bottom, Belmont County, Ohio. The companies have secured most of the necessary permits, but have yet to make a financial investment.

“The Ohio River Valley is poised to be a petrochemical hub with a second cracker plant,” one speaker said, a prospect that likely got few endorsements among his commuting peers.