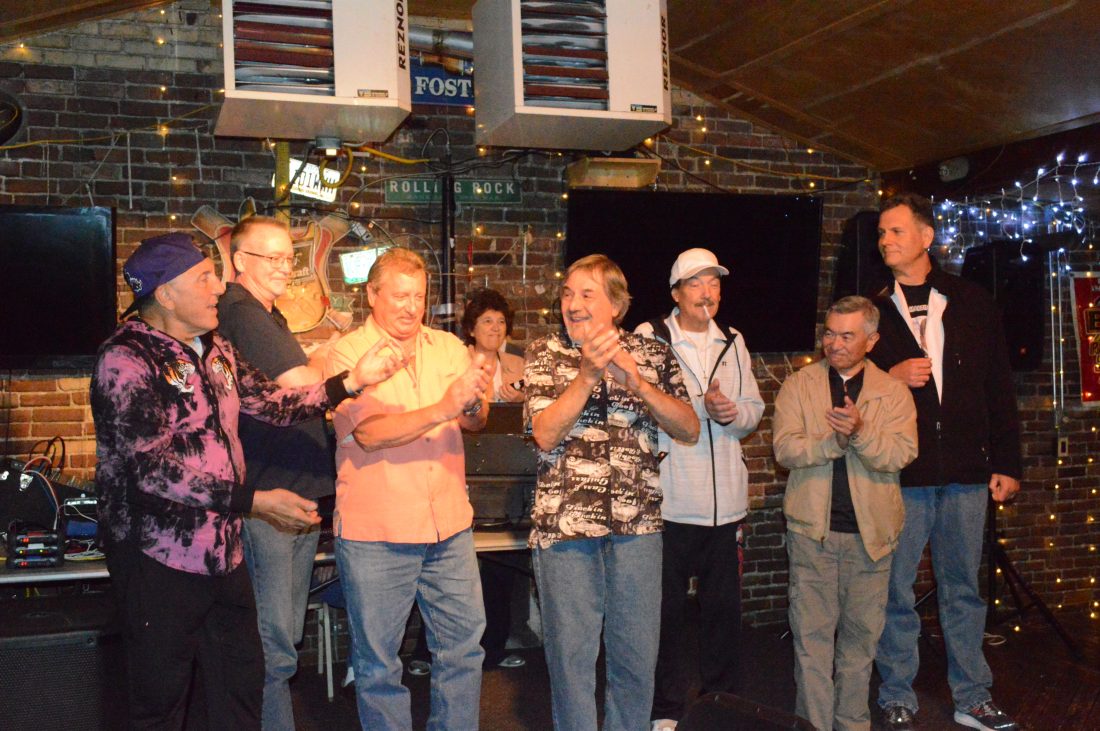 COMPETITORS — Contestants give it their all singing classic Dean Martin tunes at the Spot Bar Thursday during the annual Dean Martin Karaoke Contest. From left, Tony Calabrese, George Brady, Mike Yacos, Ray Scalise, Dominic Fabian, Jeff Yatsu and Mike Wiggins. Scalise and Fabian shared the winning votes and chose to share the honors of being the opening act for Saturday’s show at the bar. -- Amy Neeley

STEUBENVILLE — The annual Dean Martin Karaoke contest is always a great way to kick of the Spot Bar’s Dean Martin Festival running through Saturday at the bar located at 217 S. Fourth St.

“This is always the fun night,” said festival organizer Rose Angelica, who served as master of ceremonies.

Singers from as far away as Michigan and Akron completed against hometown boys and others from the Tri-State Area to get the honor of opening for Saturday’s 8 p.m. tribute show featuring Bob Morelli, a Dean Martin impersonator; Dave Salara, a Frank Sinatra impersonator; and Chris Denem, a Neil Diamond impersonator.

One contestant, Mike Wiggins of Michigan, has been coming to the festival since 2000 and said the people in Steubenville have become “a second family” to him.

He said the first time he came to the festival he was unable to get any hotel rooms in the area and ended up staying in Coraopolis. He said he drove to town early the day the festival started to see the city. He wondered around for awhile and ended up at the former Jaggin’ Around restaurant. There a woman approached him and asked if he was in town for the events. That woman was Angelica.

“She said she would show me around a bit,” Wiggins said. “She showed me his birth place, where he used to sing. While we were talking I mentioned that I couldn’t find a room in Steubenville and she said she had a block of rooms reserved for Dean Martin fans at the Super 8. Not only did she get me a room, she got me a room next to Deana Martin. I had to pinch myself. I have come back every year since and try to help organize things.”

Wiggins said since that first meeting he has only missed two festivals.

The winners of the contest are chosen by applause. Scalise and Fabian received the biggest reaction from the crowd.

The two were given the chance to either have a sing off or share the opening act. In true Rat Pack style, the men chose to share the honors and each will sing three songs on Saturday.

Other events happening at the festival at the Spot Bar include a tribute show featuring Morelli, Salara, Denem at 8 p.m. today, with the Frank Gallo Band appearing at noon Saturday.