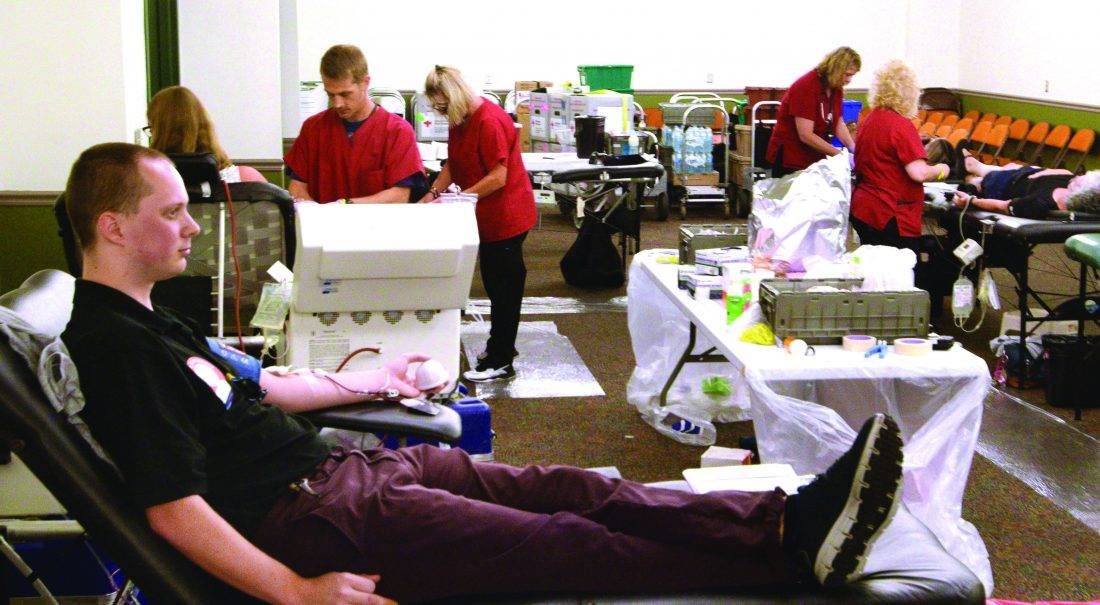 DONATION — David Burns of Wheeling was among those who donated blood during the Wheeling Nailers annual blood drive Monday at the WesBanco Arena. -- Scott McCloskey

WHEELING — It is during the summer months the American Red Cross experiences a significant drop in blood donations. So for the dozens of donors who turned out at WesBanco Arena Monday for a blood drive sponsored by the Wheeling Nailers Hockey organization, those donations couldn’t come at a better time.

“More important today, we are not in an urgent appeal (for blood donations), we are in an emergency appeal,” said Phyllis Riccadonna, account manager with the American Red Cross Greater Alleghenies Region.

She said it is a time when hospitals across the region run shorter on supplies.

“Normally the hospitals have about a five-day supply of blood regionally, however, they currently have closer to a three-day supply. Then we have our very important (Type) O negative/O positive blood supply down to about two days,” she said.

Riccadonna said Type O negative is a universal blood type that can be used for “almost” any patient who needs it in a hospital, thus the reason for the bigger demand for that particular blood type. She said there is usually a shortage of blood throughout the summer months for several reasons, including people being on vacations and students being out of school for the summer.

Riccadonna said she was hopeful the Red Cross would be able to surpass its goal of collecting 66 units of blood by the end of the day. As of mid-day, she said they already collected more than half their goal, as several dozen people had already moved through the screening process.

Nailers spokesperson D.J. Abisalih said the Nailers organization takes great pride in sponsoring the annual summertime blood drive. He said it is a great way for the organization to give back to the local community and help the Red Cross in a time of need.

“I know they’ve had some big time shortages with blood, so to get involved is really important to us,” Abisalih explained. “We had a really nice turnout.”

Abisalih said it was nice to see not only Nailers and WesBanco Arena office personnel turn out to donate, but to see a number of the hockey club’s fans turn out for the event.

“So we’re really excited that we got more of the people who are into hockey, also helping out a local cause like this,” he added.

Nailers mascot “Spike” was also on hand to help escort donors to the concession area for a light snack and beverage.

St. Clairsville resident Susan Kinsey, who has donated blood several times a year for nearly 30 years, said she donated blood at Monday’s event because it gives her great satisfaction to help out such a great cause.

“It makes you feel good,” she said.