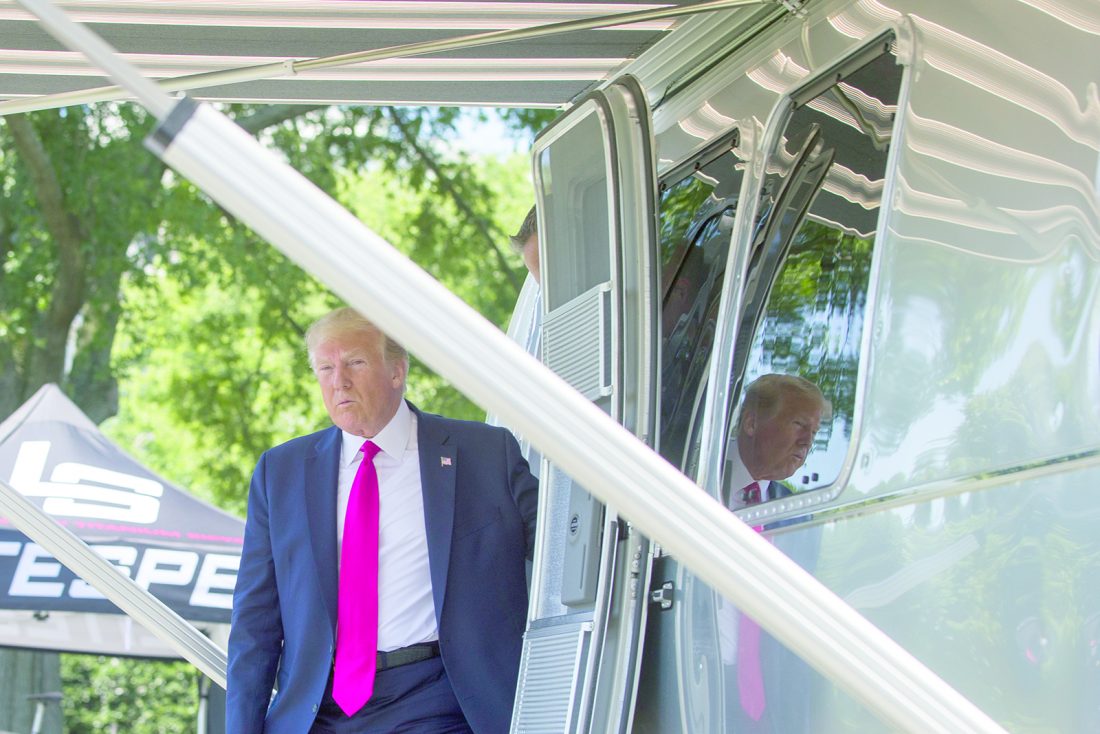 AIRSTREAM — President Donald Trump steps out of an Airstream trailer from Ohio, during a Made in America showcase on the South Lawn of the White House, Monday, in Washington. -- Associated Press

The order strengthens the standards that federal agencies must follow under the Buy American Act, which creates a preference for American-made goods.

Trump said his order will gradually boost the percentage of U.S. components for qualifying American-made products from 50 percent to 75 percent. He said the threshold would increase to 95 percent for iron and steel products.

“The philosophy of my administration is simple. If we can build it, grow it or make it in the United States, we will,” Trump said.

“Strong domestic procurement preferences for federally funded infrastructure projects are vital to the health of the domestic steel industry,” said Thomas J. Gibson, president and CEO of the American Iron and Steel Institute.

Analysts said the executive order will require the federal government to pay more for many products.

“While it might be a good headline for the administration, it’s taxpayers that will end up paying for this policy,” said Bryan Riley, director of the conservative National Taxpayers Union’s Free Trade Initiative.

“When we artificially reduce the pool of qualified suppliers or the variety of eligible supplies that can satisfy procurement requirements, projects cost more, take longer to complete, and suffer from lower quality,” said Dan Ikenson, director of trade studies at the libertarian Cato Institute.

The president signed the order during an annual White House “Made in America” showcase. Manufacturers from all 50 states were represented.

Trump has made it a priority to boost U.S. manufacturing. Even so, the nation’s trade deficit has continued to grow under his watch, widening to a decade-long high of $621 billion in 2018.

Trump said foreign countries have been allowed to “steal our jobs and plunder our wealth” in previous administrations. He also used the event to highlight tariffs he’s imposed on China, saying China has paid a big price economically as a result.

Dave Drabkin, former chairman of a federal panel that recommended improvements to the defense acquisition system, said it would likely take a minimum of nine months to complete the rule necessary to enact Trump’s directive.

He called the action “positive for American companies, negative for foreign competitors” but noted that other nations could undertake similar actions to protect their domestic companies.

Trump also acknowledged that it’s unclear how a new trade agreement he negotiated with Canada and Mexico will fare in the Democratic-controlled House. Democrats want to strengthen enforcement of the agreement’s labor and environmental obligations.

“We have to get the Democrats to pass it. They may or may not depending upon how they feel politically,” Trump said. “It’s all politics, unfortunately.”

Democratic leaders may be pressuring their rank-and-file not to express support for his trade agreement “because they think that’s a victory for Trump,” he said.

“But if it doesn’t happen, I have a better plan, OK? So don’t worry about it,” Trump said without elaborating.