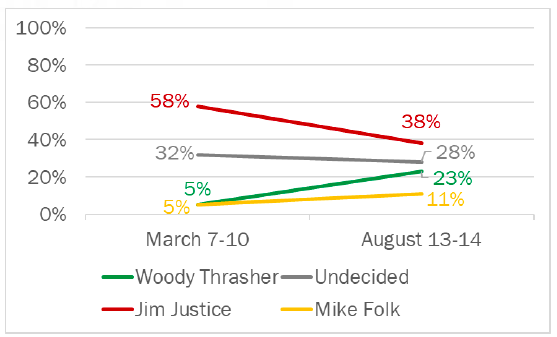 “Less than two-in-five Republican primary voters have a favorable impression of Jim Justice…while his unfavorables have increased by 14 points,” according to the poll’s authors, Chris Wilson and Conor Maguire. “Almost half of men 18-54 (49 percent) have an unfavorable impression of Jim Justice, followed by men 55+ (41 percent), women 18-54 (40 percent), and women 55+ (33 percent).”

According to the report, Republican primary voters who identify as “somewhat conservative” are the most dissatisfied with Justice at 46 percent, followed by 39 percent of “very conservative” voters and 36 percent of moderate Republicans.

“Only two-in-five Republican primary voters approve of the job Jim Justice is doing as governor, a decrease of over 20 points from the previous survey fielded in March,” according to the poll. “Jim Justice’s disapproval has increased by 10 points since March. Notably, Justice’s disapproval is higher with men (39 percent) than women (29 percent), while women (28 percent) tend to be more likely to say they are unsure of their approval of Justice than men (14 percent).”

The poll also shows more support for Thrasher, the business owner and engineer who ran the state Department of Commerce for Justice until he was forced to resign in June 2018 over issues with the RISE West Virginia flood recovery program. Thrasher switched from Democrat to Republican prior to filing precandidacy papers in April to challenge Justice.

“These data are the clearest sign that as both candidates become better known by West Virginia Republican primary voters, this race will continue to tighten and evolve in a favorable direction for Woody Thrasher,” the report said.

The Thrasher campaign was pleased with the numbers, which came after months of television and radio ad buys by the campaign, plus visits to Republican events around the state this summer. Austin Barbour, partner with Strategic Partners & Media and senior consultant to the Woody Thrasher for Governor campaign, said their effort is paying off.

“The biggest thing these numbers tell us is not just how Gov. Jim Justice’s favorability keeps plummeting, but also how when West Virginia Republicans actually start to get familiar with Woody Thrasher, a vast and quickly growing majority of them will vote to see him in the governor’s mansion. It’s still early, but we’re even more confident now that as Woody continues to travel the state extensively and listen to the concerns of conservative voters, he will generate even more support.”

Mike Lukach, the campaign manager for the Justice campaign, downplayed the results from the Thrasher poll.

“It should come as a surprise to no one that Woody Thrasher has manufactured a poll designed to benefit Woody Thrasher,” Lukach said. “While others play political games, Gov. Justice is working every day for the people of West Virginia, and his policies have led to record economic growth, and historic investments in roads and schools.”