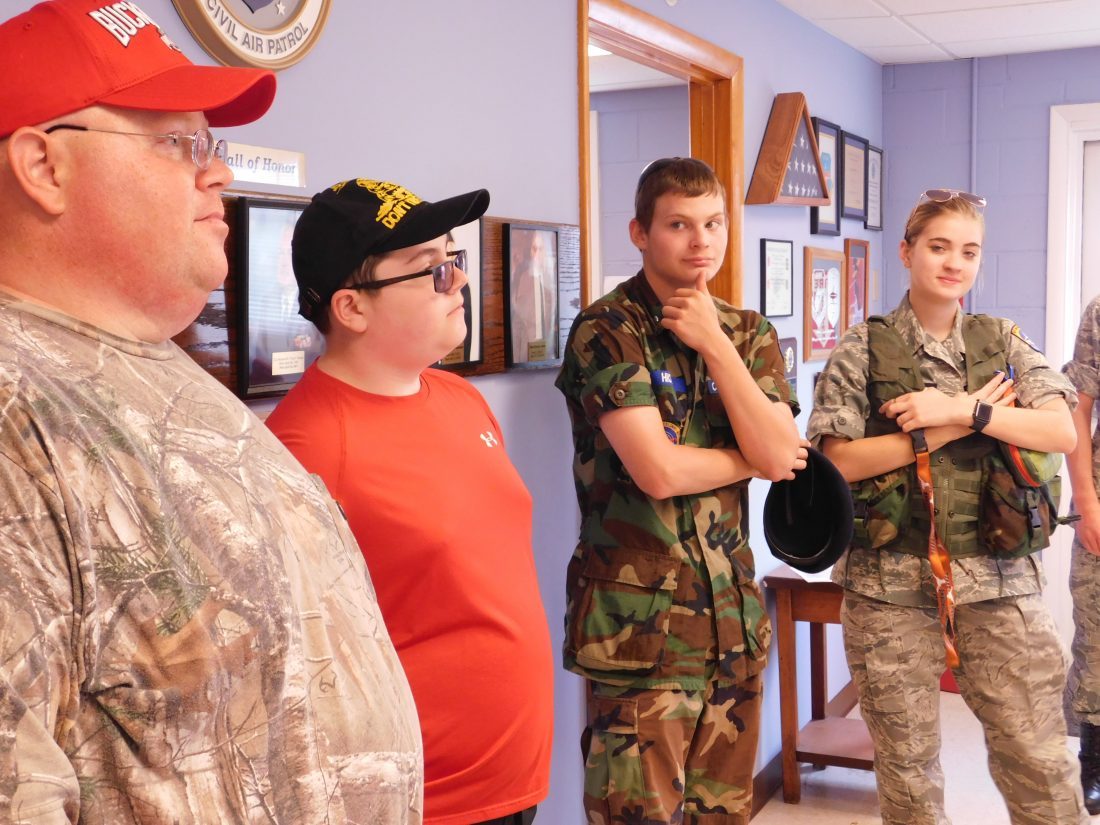 WHEELING — The Wheeling Composite Squad is looking for more potential cadets to take to the skies during emergencies, and the CAP held an open house Saturday at their headquarters at Wheeling-Ohio County Airport to show their stuff.

“We’re letting the community know who we are and what we do up here,” Lt. Col. Paul F. Hicks Jr. said.

He pointed out a montage of events they have participated in.

“We’re going to be bringing our aircraft out of the hanger, letting them see what our aircraft looks like. The cadets will be doing demonstrations of different skills they’ve been taught since they’ve been here, and also talk about their experiences in Civil Air Patrol.

He added this is the first time they have held an open house. Currently there are 13 cadets on the roll.

“What we’re hoping to do is just recruit and let people know we’re up here. I call it the best-kept secret in the Ohio Valley, because we’re not broadly-known, but we do a lot of emergency services. We search for downed aircraft,” Hicks said.

The CAP is the official auxiliary of the United States Air Force and charged with missions of emergency services, aerospace education and cadet programs. The all-volunteer force is for members 12 years old and older. They add there are positions to fill for any interest and need for anyone willing lend a hand.

“There are a lot of opportunities for cadets after they graduate from high school. There’s scholarships. The academies look at our cadets in a different light that they do others,” Hicks said. “It opens doors.”

Maj. Nick Ellefson pointed out the CAP’s primary aircraft, a Cessna 182 Skyhawk. He said equipment is able to radio and cellular phone signals from distressed people such as lost hikers.

“We can track them into a location and then we can guide ground patrol units,” Ellefson said.

He also indicated they can shoot photography from the plane. He added that he doubted there would be any flying as part of the open house, but visitors got to sit in the cockpit and get a look at the controls.

Cadet Master Sgt. Mathew Chambers and Cadet 2nd Lt. Cameron Hicks, both from Wheeling, were on-hand to answer questions from potential recruits and to share some of their experiences.

Hicks recounted one function he participated in at Oshkosh, Wisconsin, last year, signaling landing aircraft with flags, about 150 feet from an active runway.

“I marshalled over 400 airplanes in one day. I basically told them were to go. They were coming in all the time, one behind the other,” he said.

“I was a fan of airplanes since I was 6 years old,” Hicks said. “On my 12th birthday I joined up. I’ve been in ever since. … I want to become an aircraft mechanic in the civilian market.”

“I liked airplanes. … I started out with little hobby airplanes, trying to figure out how to make them and learn about aerodynamics,” Chambers said, adding that he first heard about the CAP when he was in sixth grade. “I plan on going into the Air Force. I want to do something onto the aviation field. I want to fly bigger airplanes, but I also want to work on them.”

Cadet Chief Master Sgt. and 1st Sgt. of the Wheeling Composite Squadron Emily Kuhn of Wheeling, plans to continue a career in the Air Force.

“It’s a great stepping stone for going to Air Force training,” she said. “Once I become a second lieutenant, I will automatically be able to be up for promotion as a (senior airman) in the Air Force once I graduate basic training.”

Last summer she was the only female in West Virginia to participate in Hawk Mountain Ranger Academy.

Kuhn added that she hopes more females, and more people in general, take an interest in the cadet program.

Second Lt. Ben Schneider pointed out search and rescue equipment. He added that he often takes photographs from airplanes, including photos of past flood damage for the Federal Emergency Management Agency.

“We work for almost every agency that’s part of Homeland Security,” he said, adding that he has been on missing person and downed aircraft searches. “I’ve been involved in Civil Air Patrol for almost 18 years.”

Schneider said other activities include visits to museums and camping and compass courses, as well as visits to the Flight 93 wreck site. The aircraft was on of four highjacked by al Quaeda terrorists during Sept. 11, 2001, and crashed during an attempt by passengers to seize control.

He added that cadets are high-quality volunteers and complete the same obstacle course as the National Guard.