What’s on school menus this fall? A heaping helping of trade mitigation 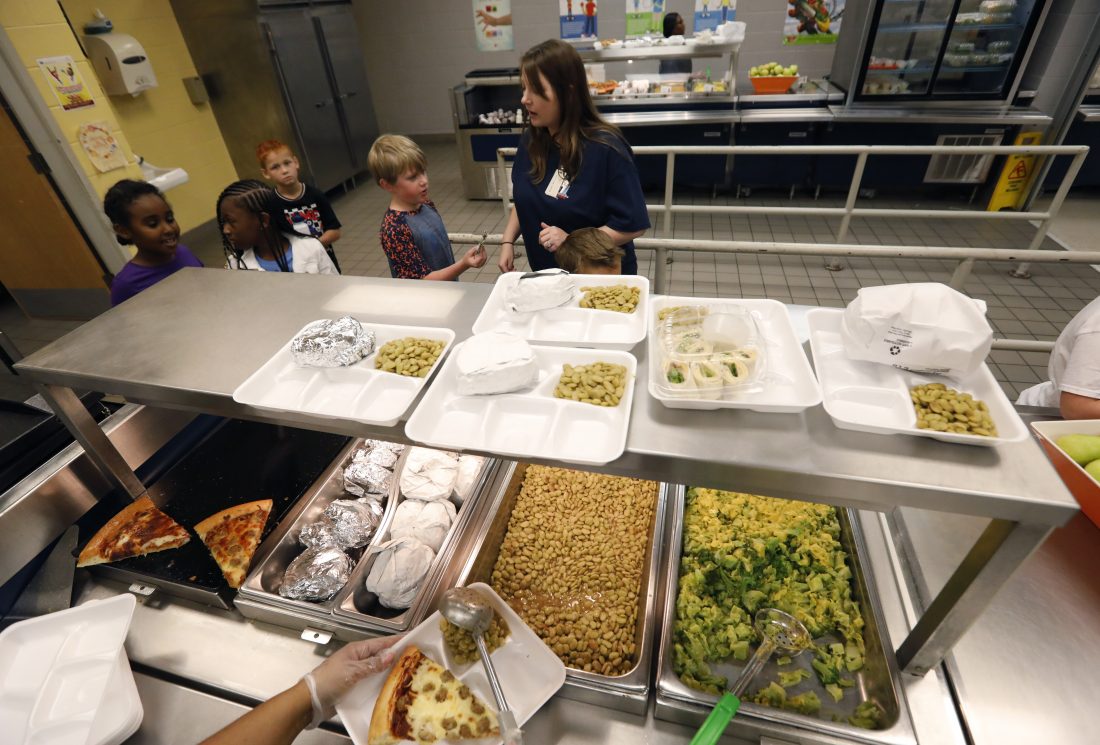 WHAT’S FOR LUNCH? — A teacher lines up the students for school-prepared lunches at Madison Crossing Elementary School in Canton, Miss., Friday. -- Associated Press

This fall, some U.S. school cafeterias are expecting shipments of free food, one little known consequence of President Donald Trump’s trade disputes. The products are coming from the Department of Agriculture, which is giving away the $1.2 billion in foods it’s buying to help farmers hurt by trade negotiations.

A Maryland district is awaiting a truckload of canned kidney beans — one of several “trade mitigation” items schools were offered.

“We make our own chili soup, so we knew we had a use for that,” said Barbara Harral, a nutrition official for Montgomery County Public Schools.

All told, she said the district is getting $70,000 worth of free products for the fall, including apples and oranges. Harral, who has been with the district for 22 years, doesn’t recall the USDA offering trade mitigation foods before.

The USDA has long purchased and distributed agricultural products to help farmers, who can face swings in supply and demand in any given year. But the agency is buying even more as a result of Trump’s trade fight, which prompted other countries to take retaliatory actions that curb imports of American farm products.

That’s resulting in an unusual bounty for the groups that get government foods, showing one way federal policies influence what people eat.

According to the USDA, most food purchased as part of trade-relief efforts is going to programs that help the needy. The Los Angeles Regional Food Bank, for instance, says it’s getting roughly twice as much government food as normal, including rarely donated items like pistachios.

Though they may struggle to handle the sudden deluge, food banks say they’re generally happy for the bounty.

The USDA says schools are only getting a tiny slice of trade mitigation foods, accounting for a majority of the $27 million of products ordered for child nutrition programs. But at a national convention for school cafeteria employees this summer, agency officials noted the program is expected to continue with additional items.

Already, schools are entitled to annual allotments of USDA foods based on how many students they serve through the national school lunch program. But cafeteria officials who operate on tight budgets say they have always welcomed the “bonus” foods the agency offered in the past, even if the market forces that make the products available isn’t always clear.

One year, they recall there was bonus almond butter, long before it was popular. Another year, there were frozen catfish pieces.

“At the time, we didn’t have a way to use them,” Harral of Montgomery County said of the catfish.

In the last couple years, the USDA said it hasn’t really offered bonus foods to schools, instead diverting them to programs for the needy. That’s making the trade mitigation items that much more of a treat for school food officials.

“The room lights up when everyone knows we’ve got new items that are coming,” said Scott Clements, director of child nutrition at the Mississippi education department, which ordered two truckloads of trade mitigation pulled pork and four loads of kidney beans.

Still, putting bonus foods to use can be tricky for schools, which plan menus far in advance and have to consider factors like procurement contracts and warehouse capacities. Such limitations are likely why schools didn’t take full advantage of the $100 million in trade mitigation foods they were offered for the fall, according to the USDA.

In Alaska, officials only ordered a half truck of free kidney beans.

“There’s only so many ways you can use them,” said Sue Lampert, a school food official for the state.