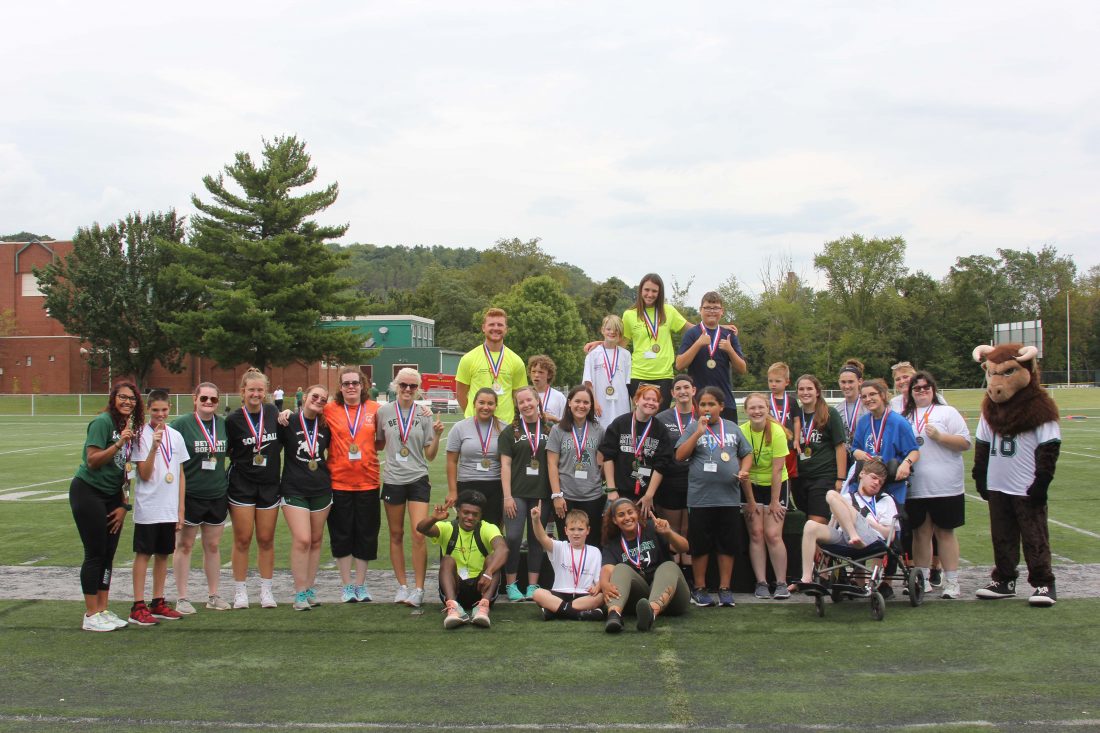 BETHANY — As Bethany College’s inaugural Special Olympics Field Day neared its end on Sunday, Joey Collette stepped to the podium to receive his medal and declared: “I’m the winner.”

He wasn’t alone in his sense of accomplishment.

Smiles brightened the faces of the more than 100 volunteers — most of them Bethany students — the 10 athletes, and the family members who brought them to the noncompetitive event.

She began planning for the event in April, but it was a labor of love for Paxton, who at age 6 was diagnosed with Asperger’s syndrome, a form of high-functioning autism. The goal, she said, was to provide a fun and inclusive atmosphere and plenty of memories.

“Just standing here, I’m awestruck,” Paxton said as she addressed a crowd that included Bethany College staff and family members of the athletes among its spectators.

Lacey Miller, of Wellsburg, brought her daughter Addy Jane because of the 10-year-old’s love of sports.

“It’s not every day that there’s an event like this nearby,” Miller said, noting how welcoming everyone was.

By the end of the day, Addy Jane was showing off her own medal.

Barbra and Jay Beatty, of Wellsburg, welcomed the opportunity for their 12-year-old son, Sidney, who is on the autism spectrum. Barbra Beatty said Sidney was on a local baseball team, but he spent most of the time on the bench. The Special Olympics event, she said, would give him more positive sports memories.

Each participating athlete was paired with at least one Bethany student who served as the athlete’s buddy for the day.

“Personally, I’m just blown away by the number of volunteers,” Jay Beatty said. “These are college students who could be hanging out with their friends, but they’re here.”

Paxton’s mom, Tonya Paxton, took the time to speak with each of the parents of the special needs athletes. She said she wanted to offer a story of hope.

The Field Day, held at the Thomas Phillips Johnson Health and Recreation Center, took on a round robin approach, with the athletes spending at least 25 minutes playing each sport.

When asked what her favorite sport was, participant Kami Morris, of Moundsville, said, “All of them. I can’t decide.”

Numerous volunteers, including members of the Bethany College sports teams, manned each station.

Paxton competes on the Bison soccer and track and field teams.

Several members of the Waynesburg University women’s soccer team answered a call for volunteers from within the Presidents’ Athletic Conference.

“All in all it was a great experience,” Albert said, noting that Paxton did the hard part. “The easiest part is running around with the kids and having fun.”

After the sports stations, the volunteers and athletes gathered on the middle of the football field and danced. They then had a unified relay around the Bison track.

The day ended with a medal ceremony, with each athlete and their buddies stepping to a podium for their participation awards and photo opportunities.

In her opening remarks, Bethany President Tamara Nichols Rodenberg expressed pride in Paxton and the Bethany student body for its commitment to the Special Olympics Field Day.

As the event concluded, Paxton said she is grateful for the help and encouragement she received.

“I’m blessed,” she said. “I have a community that supports me and makes this event possible.”