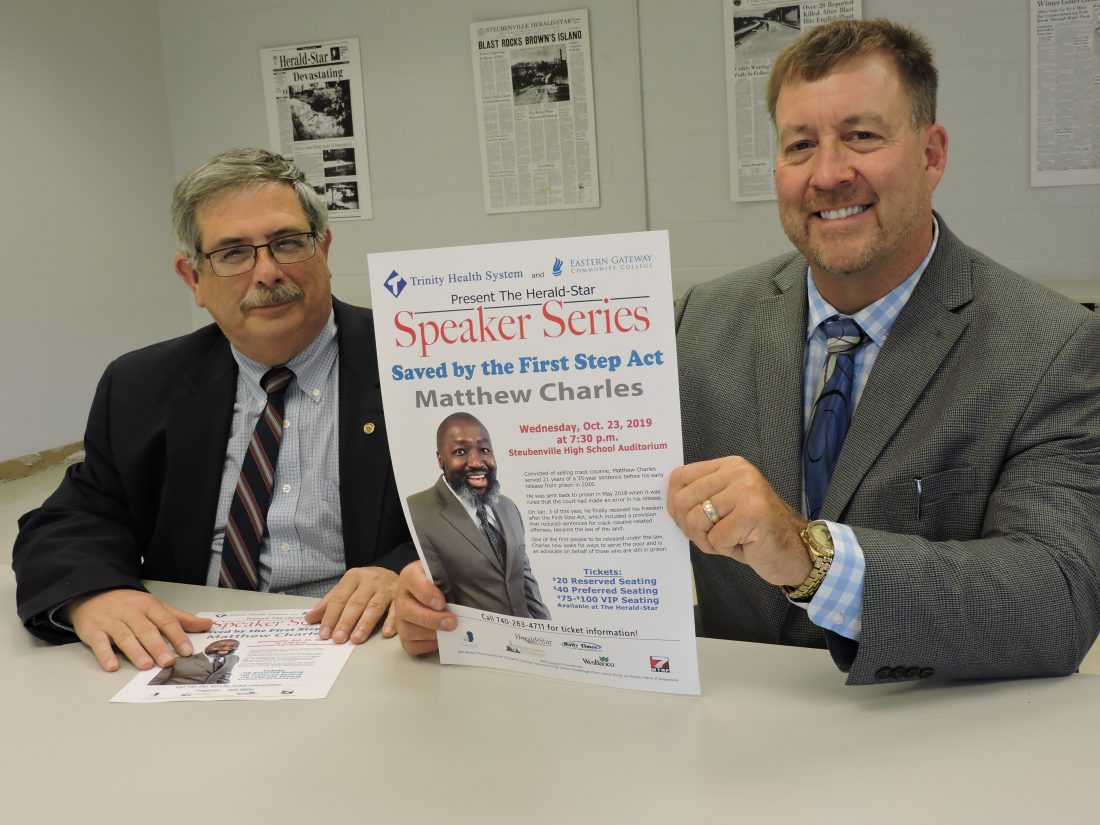 STEUBENVILLE — Having the opportunity to hear different people share different points of view and offer new perspectives is important for a community, and that’s part of the reason the Herald-Star Speaker Series has made an impact throughout our region.

“I think the presentations give the community something to look forward to. They are events that feature a noteworthy speaker who is able to deliver a message that we can all learn from and enjoy,” explained Mike Florak, executive director of community relations for the Franciscan University of Steubenville.

Matthew Charles will deliver the next presentation in the series, which is set for 7:30 p.m. Oct. 23 in the Steubenville High School auditorium. The Nashville, Tenn., resident will discuss how he has turned his life around, going from a person he describes as a “dangerous criminal” to a man who helps others and advocates for changes in the criminal justice, especially the sections that deal with mandatory minimum sentences.

The university is one of the sponsors of the series, which will be marking its 10th presentation.

“Charles has an interesting story to tell,” said Ross Gallabrese, executive editor of the Herald-Star and The Weirton Daily Times. “He’s one of the first, if not the first, beneficiaries of the First Step Act, which passed Congress with bipartisan support last year and was almost immediately signed into law by President Donald Trump.”

Basically, the legislation seeks to reduce the rate of recidivism after men and women are released from prison.

Charles had been sentenced to 35 years in prison in 1996 after being convicted of selling 216 grams of crack cocaine and possessing a gun. While incarcerated, he put his time to good use, completing more than 30 Bible study classes, mentoring fellow inmates and working to become a law clerk.

After being granted early release in 2016, he moved to Nashville, became an active volunteer and a productive member of the community, only to be told 18 moths later that officials had made a mistake when they granted his early release an ordered him sent back to prison. After the First Step Act became law, his lawyers successfully argued for his release, which happened on Jan. 3.

Past speakers in the series have included Clint Hill, a former Secret Service agent, and his co-author, Lisa McCubbin; former CIA agents Antonio Mendez, who was the mastermind behind the escape dramatized in the film “Argo,” and his wife, Jonna; Capt. Richard Phillips, whose capture by Somali pirates and rescue by Navy SEALS was dramatized in the film “Captain Phillips”; Mark Tillman, who piloted Air Force One; Rebekah Gregory, a survivor of the Boston Marathon bombing; Mark Geist, a member of the security team that was involved in the Battle of Benghazi; Fox News commentator Jeanine Pirro; Michael Hayden, former director of the Central Intelligence and National Security agencies; and John Quinones, star of the television series “What Would You Do?”

“I think everybody has been able to take something positive away from the very eclectic group of speakers we have had,” Florak said. “We’ve heard speakers from all walks of life, and their different stories have been uplifting. I think everyone needs that in their life — to hear those kinds of stories.”

The speaker series, which is presented by Eastern Gateway Community College and Trinity Health System, provides a perfect opportunity for that.

“It gives you something to look forward to,” Florak added. It’s an event that the community can rally around. Every speaker has been a person who is nationally known for one reason or another. Area residents get to hear them, and they get to see what a great community we have here.”

Reserved seat tickets for the presentation cost $20 each and are available by contacting Diana Brown at the Herald-Star office, 401 Herald Square, at (740) 283-4711. Tickets also be purchased online by visiting heraldstaronline.com or weirtondailytimes.com and following the links to the speaker series.

A preferred seating option is available at $40 a person. That ticket includes a seat closer to the stage and the opportunity to be among the first people to meet Charles after the presentation.

VIP packages are available at a cost of $100 for a couple and $75 for a single ticket. That package includes admission to a private reception that will run from 5 p.m. to 6:45 p.m. at the YWCA; a selection of beer, wine and hors d’oeurvres; the opportunity to meet Charles and have a photograph taken with him; and preferred seating for the presentation. The number of VIP packages available is limited.

Also sponsoring the series WesBanco, the Jefferson County Chamber of Commerce and WTRF-TV. Special support is being provided by the Best Western Plus University Inn, Piergallini Catering, Steubenville High School, Newbrough Photo, Hertz-Thrifty Car Rental and the YWCA of Steubenville.