Taste of the County marking 25th

‘A Local Affair’ theme of Oct. 9 fundraiser for United Way of Jefferson County 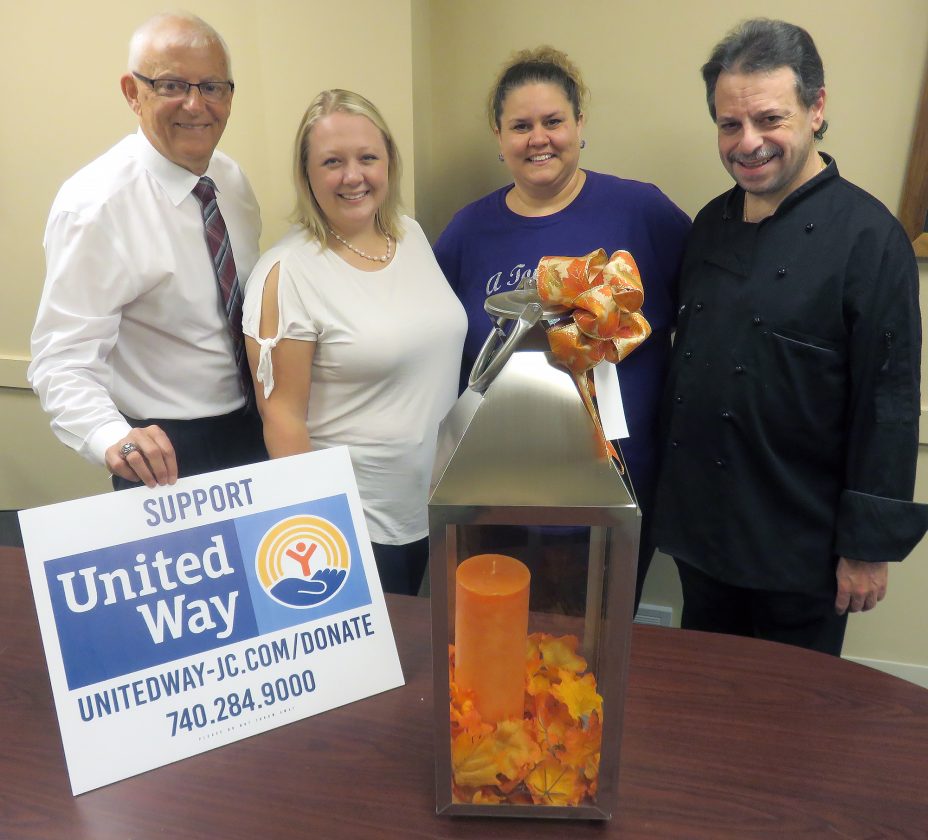 SPECIAL FUNDRAISER YEAR — The Taste of Jefferson County, a key fundraiser for the United Way of Jefferson County, is marking its 25th anniversary, once again, offering area residents a fun evening of sampling foods, desserts and drinks and participating in a variety of special drawings, games, auctions and the chance to win a piece of jewelry from Discovery Jewelers of Wintersville. Taste of Jefferson County will be held on Oct. 9 at St. Florian Event Center in Wintersville with doors opening at 5 p.m. Tickets are $35 per person and are available by calling the United Way office at (740) 284-9000 or going online to unitedway-jc.org/taste. Gathered around what will be one of many auction items available are, from left, Tom Timmons, United Way campaign chair; Kate Sedgmer, executive director, United Way of Jefferson County; and two longtime vendors, Stephanie Pethtel, owner of Touch of Elegance, and Matt Parise of Mama G’s Catering. Restaurants, caterers and bakeries interested in participating are encouraged to call (740) 284-9000. -- Janice Kiaski

STEUBENVILLE — It’s a special year for Taste of Jefferson County.

The fall fundraiser for the United Way of Jefferson County is marking its 25th anniversary and once again will provide area residents with a casual evening of sampling local foods, desserts and drinks while generating money for the 2019-20 campaign.

This year’s event will be held Oct. 9 at St. Florian Event Center in Wintersville with doors opening at 5 p.m. The cost to attend is $35 per person. To purchase tickets or for information, call the United Way office at (740) 284-9000 or go online to unitedway-jc.org/taste. Limited tickets will be available at the door.

“The United Way of Jefferson County is once again preparing for one of the largest events of the year,” said Kate Sedgmer, executive director, of the occasion where vendors will be vying for popular-vote, bragging rights for “Best Entree,” “Best Dessert” and “Best Booth Display.”

“This year our theme is ‘A Local Affair,'” Sedgmer said, offering an explanation of the school of thought behind it.

“This year when our committee was sitting down to think about a new theme for the 25th anniversary, we were stumped to find a theme that seemed grand enough for such a long, ongoing event,” Sedgmer said. “It was decided to choose ‘A Local Affair’ because it seemed most fitting, considering 98 percent of the funds United Way raises stays local. What we’re trying to do is impact our local residents, and we are so dependent on our local businesses and families to support us,” she said.

“In years past, we have done themes like ‘Around the World, ‘Under the Sea’ and ‘A Night at the Carnival,’ and last year, we celebrated ‘Oktoberfest.’ The theme is always meant to inspire the restaurants, bakers and caterers that participate to center their menu for the evening around and decorate their booths accordingly. It’s a fun way to keep them involved and keep them thinking year-long about United Way and what they can do to make the Taste our biggest event year after year,” she said.

“We still need restaurants and caterers to sign up,” Sedgmer said. “They can find info on our website, unitedway-JC.org or by calling the office at (740) 284-9000. We typically have space for 20 vendors. It’s on a first-come, first-served basis. We encourage new vendors every year and are forever indebted to the local businesses that come every year,” she added.

One of them with a faithful longtime presence is caterer Matt Parise of Mama G’s Catering.

“We would never miss this event. We work our schedule around it and get a lot of business because of it,” Parise said, noting Mama G’s has won the “Best Entree” award multiple times.

“This event is one of the best in Steubenville,” Parise said. “It showcases restaurants and caterers throughout the valley while we all donate to a very, very good cause.”

A Touch of Elegance also is a familiar participant and was the 2018 winner for best dessert.

“We always look forward to the Taste of the County every year,” said owner Stephanie Pethtel. “It’s always such a fun evening and a great way for the community to come out and support not only the United Way but also the local businesses,” she said.

“The guests also come to find new places to patronize in Jefferson County that they may not have known about. It’s also wonderful to see so many returning guests and lots of new faces as well,” Pethtel added.

In addition to sampling local foods, desserts and drinks, Taste of Jefferson County offers a variety of special drawings, games and auctions, the proceeds of which also benefit the 2019-20 United Way campaign.

“This year guests can look forward to playing local trivia, sponsored by Discovery Jewelers of Wintersville. Contestants will have the chance to win a piece of beautiful jewelry,” Sedgmer said. “Discovery Jewelers has been a wonderful partner to us for more than two decades. Each year, we received jewelry valued at more than $2,500 — this is a huge attraction for many of our guests. Owner Chip and Chris Warren’s donation helps raise a quarter of what we will make from the event. We could not pull this event off without their help,” Sedgmer said.

Taste of Jefferson County has been the United Way’s largest fundraiser every year since its inception, according to Sedgmer, who credited Jim Morgan and Sue Hershey with getting it established.

“Through the years, vendors have come and gone, venues and themes have changed, but one thing has remained consistent — the generosity of our community,” Sedgmer said. “United Way is challenged to raise $350,000 this year to help support 15 local nonprofits and impact more than 20,000 people. This event helps us get one step closer to our goal. If you haven’t been, please come check out the event — it’s a casual, fun evening,” she said.

Tom Timmons, United Way campaign chair, is among the many who put Taste of Jefferson County on their must-attend calendar.

“I can’t emphasize enough how huge it is that we have vendors that have participated for more than two decades. If we had to purchase all of the food for the evening, all of the decorations, this event would not be possible. It would cost us thousands of dollars to put on, but because of their support, we instead make thousands of dollars,” Sedgmer.

“This year our team had a big obstacle to overcome,” she said. “We worked with Todd Piergallini at St. Florian Hall for years. He and his staff worked tirelessly for us, and we never had to do much prep as he knew what we needed and what we expected. This past year, we were able to honor his family and catering business with one of our community partner awards. He did just as much for us as he did for any nonprofit in Jefferson County, and we will forever be grateful to him,” she said.

“We are excited to work with the new caterer at St. Florian and look forward to continuing the Taste of Jefferson County for many years to come at their facility. Guests can expect a few new changes but can count on it being the same fun evening that it has been for 25 years,” Sedgmer said.

At the United Way’s kick-off event this year, it announced a goal outside of the usual fundraising campaign, according to Sedgmer.

“We heard our donors, and we have listened to our community members. United Way has to be more than just a fundraiser in Jefferson County. There is a major need for nonprofits to step up and expect more of the people we are serving to help them live a more prosperous, happy and healthy life,” she said.

“Often times people give generously to the poor without hesitation, because we know our neighbors are in need, but because we have never expected more, we have caused a serious generational poverty cycle in our community,” she said. “United Way is stepping in to provide not just monetary resources for these people, but tools so that they can help bring themselves out of the poverty they live in,” she continued.

“We have bold goals — creating a transportation system that will help get people to work, and we want to work with our local resources to create better housing options, while still remaining to be the helping hand that we have been for almost 90 years in Jefferson County,” she said.

“We have to raise $350,000 to continue supporting our agencies that desperately depend on our money each year. However, if we want to accomplish our bold new goals, we must raise more. Our first priority is taking care of the 15 nonprofits that depend on us, but if we grow the pot, we have the opportunity to do so much more in Jefferson County,” she said.

“The Taste of Jefferson County, and events like it, are great ways we can raise money unrestrictedly to go toward our new goals. We encourage anyone who wants to be involved, anyone who has ever thought ‘why don’t we have this?’ or ‘why doesn’t someone do something about that?’, to get involved with United Way,” Sedgmer said.