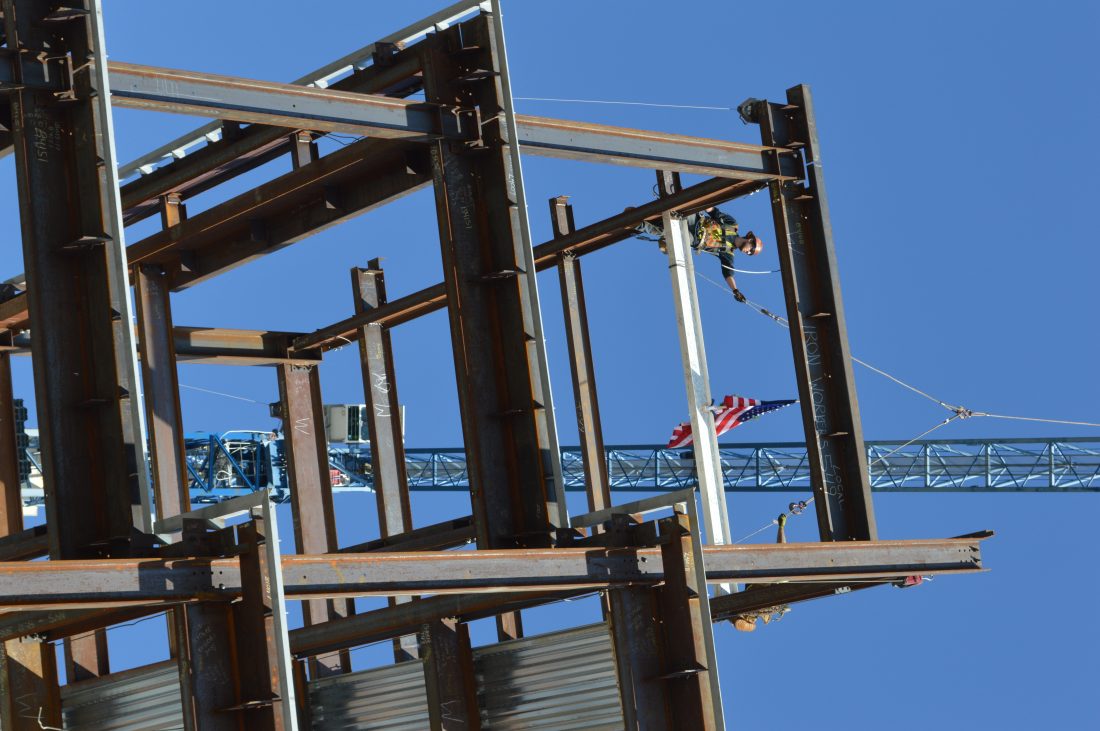 STEUBENVILLE — Trinity Health Systems celebrated the end of Phase I construction of its new, $75 million patient tower Thursday, hoisting the last of the steel beams forming its frame into place.

CEO Matt Grimshaw described it as a “major milestone.”

“It’s a big day,” Grimshaw said prior to the start of the “topping off” ceremony at the work site. “We’ve seen the building come out of the ground over the last several months to the point where we’re putting the finishing touches on the structural steel. It’s a major milestone. Over the next few months you’ll see it go from being a steel frame to being enclosed.”

The final beam was painted white, a construction tradition, and put on display in the hospital for several weeks prior to the ceremony so employees could sign their names on it.

Before raising the beam into place with a crane crews also attached an American flag and an evergreen to the beam. The evergreen signifies the work was completed without a loss-of-life accident.

“About six months ago we stood here and had a ground breaking and blessing event where we prepped the site, and today we’re celebrating this major milestone,” Grimshaw said. “This is complicated work, we’re putting up a couple-hundred-thousand square foot building with tons of structural steel. It’s gone well.”

With the beams in place, he said crews will be starting the concrete work over the next couple weeks. After that they’ll be working on the skin, “probably beginning that in early November.”

“Once we were able to get the steel going it’s gone really quickly,” he said. “We’re still looking at completion in the first half of 2021. The inside work will take a lot of time, but before we can do that we’ve got to get the building enclosed.”

The new, 183,000-plus-square-foot addition will feature more than 80 all-new private patient rooms, each with a private bath, as well as new public spaces, including a food court and atrium. They’ll also be moving offices and services now based at Trinity Medical Center East onto the Trinity Medical Center West campus.