Workers on strike at Langeloth Metallurgical 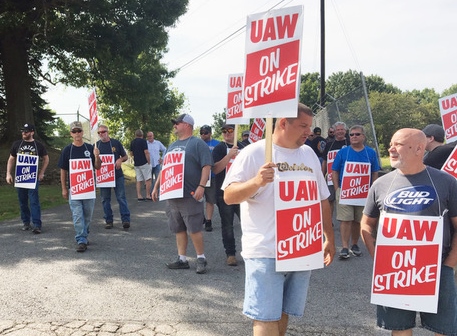 LANGELOTH, Pa. — Serenaded by honking vehicles and sustained by good Samaratin-delivered pizza and water, union workers Tuesday picketed for the second day in a row outside the gates of Langeloth Metallurgical Co.

The employees, 90 members of United Auto Workers Local 1311, began a work stoppage Monday morning at the metal fabricating firm in the Langeloth section of Smith Township. Seniority rights is the primary reason for the strike, said Bernie Froaps, a union member.

Seniority rights essentially allow union workers with the longest service times at a company to get the first crack at certain jobs.

Froaps said the local’s executive committee rejected the company’s “last, best and final offer” on Aug. 8, and had to wait 30 days before beginning a work stoppage.

The company did not respond to requests for comment at the plant or by phone.

Langeloth Metallurgical, according to Froaps, employs about 130, including 40 who are salaried. A number of them reside in nearby West Virginia and Ohio.

Jim Hall, president of the local, stood outside the plant entrance as he read a statement from the union.

“United Auto Workers Local 1311 has worked for decades with LMC to ensure the company’s profitability and our job security. Today we are standing united for our workplace, dignity and seniority rights,” the statement read.

“Make no mistake that our union fights hard for economic issues, but working with dignity and respecting our seniority is just as important for our members as economic issues. We are prepared to stand united until we can come to an agreement that achieves this.”

No talks are scheduled at this time, however.

“We’re waiting to hear from the LMC attorney about sitting down and coming to an agreement we can ratify,” said Jimmy Whisler, the UAW international representative for Region 9, which includes Local 1311. Whisler, who is based in Philadelphia, was at Langeloth Metallurgical on Tuesday.

Froaps said this is the first work stoppage at the plant in his 15 years employed there. He said he believed the last strike there occurred in the late 1980s. Langeloth Metallurgical is a subsidiary of Thompson Creek Metals.

Dozens of union employees picketed Tuesday, carrying red and white signs bearing “UAW on Strike.” Some had a second sign dangling from their necks. They were quiet, friendly and jovial in the rising heat, and gratefully acknowledged the courtesy honks and the sustenance provided.

“We’re getting a lot of support in the community,” Whisler said.