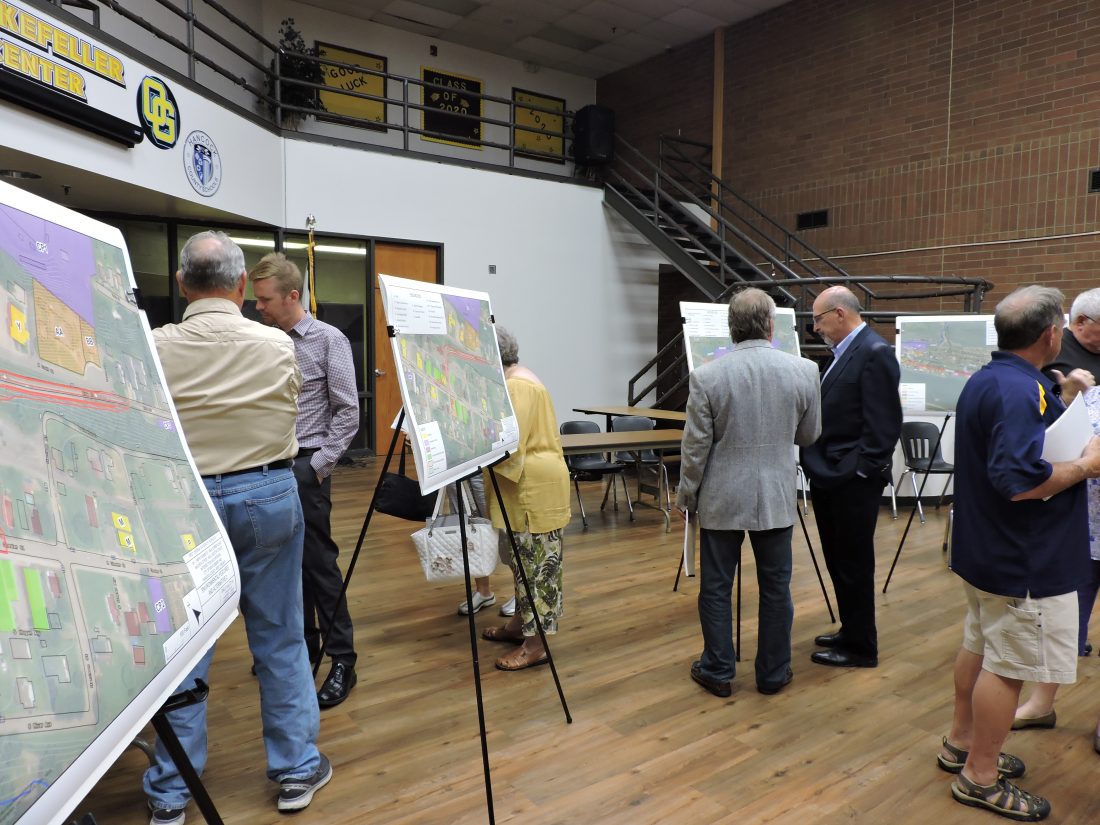 HEARING FROM THE PUBLIC — Area residents meet with representatives of the West Virginia Department of Transportation in New Cumberland, Tuesday, to review and comment on a series of five alternatives for an improvement project on a section of Route 2 in the city. Comments will be accepted until Oct. 17. -- Craig Howell

NEW CUMBERLAND — Five proposals are on the drawing board when it comes to a possible improvement project for a section of state Route 2 running through New Cumberland, and area residents have an opportunity to review and comment on them before a decision is made.

Representatives of the state Department of Transportation were in Hancock County Tuesday, hosting a public workshop focusing on the project alternatives, and to accept comments on local preferences.

Dirar Ahmad, of the WVDOT Engineering Division, explained there is a 30-day period to accept comments, and workshops such as this are held to make sure the public has involvement.

“We have to explore all of the options,” Ahmad said. “We want the public to hold us accountable.”

The alternatives presented Tuesday include:

• Alternative 1: Improve the 90-degree turns by widening the existing alignment, including intersection improvements at Madison and Chester streets, estimated to cost $3.9 million;

• Alternative 2: Improve the 90-degree turns by shifting the road between them approximately 70 feet south, also improving the Madison and Chester streets intersection, at $4.2 million;

• Alternative 3: Similar to Alternative 1, but improving the inside radius at the intersection of Madison and Chester streets, at $4.9 million;

• Alternative 4: Improve the 90-degree turns by creating a short bypass of the existing road, beginning near Hardin Run, parallel to the railroad tracks and ending on Ridge Avenue near the library, at $6.9 million;

There also is an option to take no action.

“We evaluate every single comment,” he said, noting each becomes part of the public record for the project. Even those who did not attend Tuesday’s meeting will have a chance to have input, he noted, providing comment either online or by mail. “Those will have as much weight.”

Comments on the proposals will be accepted until Oct. 17, and can be made either through the DOT’s website, by email to Sondra.L.Mullins@wv.gov, or by regular mail directed to R.J. Scites, P.E., Director, Engineering Division, West Virginia Department of Transportation, 1334 Smith St., Charleston, WV 25301.

Several area officials were among those in attendance Tuesday, many noting the importance of this project, especially in light of recent land slips on the ridge area of Route 2 in New Cumberland.

Hancock County Commission President Joe Barnabei said he was glad to see so many residents turn out for the workshop.

“It shows a lot of people are concerned,” Barnabei said, noting his own preference of Alternative 5A for the project.

“My biggest concern is to get the heavy truck traffic off the ridge,” McGeehan said, also indicating a preference for the more involved rerouting proposal. “Sometimes the cheapest route isn’t always the best route.”

State Sen. William Ihlenfeld, D-Wheeling, said he believes a decision on the project will be made “sooner rather than later,” noting he and other local legislators have a meeting Tuesday with state highway officials to discuss this and other projects.

“This is the No. 1 thing we’re going to talk about,” Ihlenfeld said, noting the project had been among local priorities listed by state officials when lobbying for the Roads to Prosperity program. “We expect that investment to be made.”

Delegate Randy Swartzmiller, D-Hancock, explained when the Roads to Prosperity program was promoted, the New Cumberland projects had listed $11 million in funds would be set aside. In May, however, he was told only $4 million was allotted, with a completion date of 2021.

“My fear is they’ve already made their mind up,” Swartzmiller said. “I hope I’m wrong.”

Swartzmiller said he believes this may be the only opportunity for this issue to be addressed, encouraging residents to participate in the comment period.