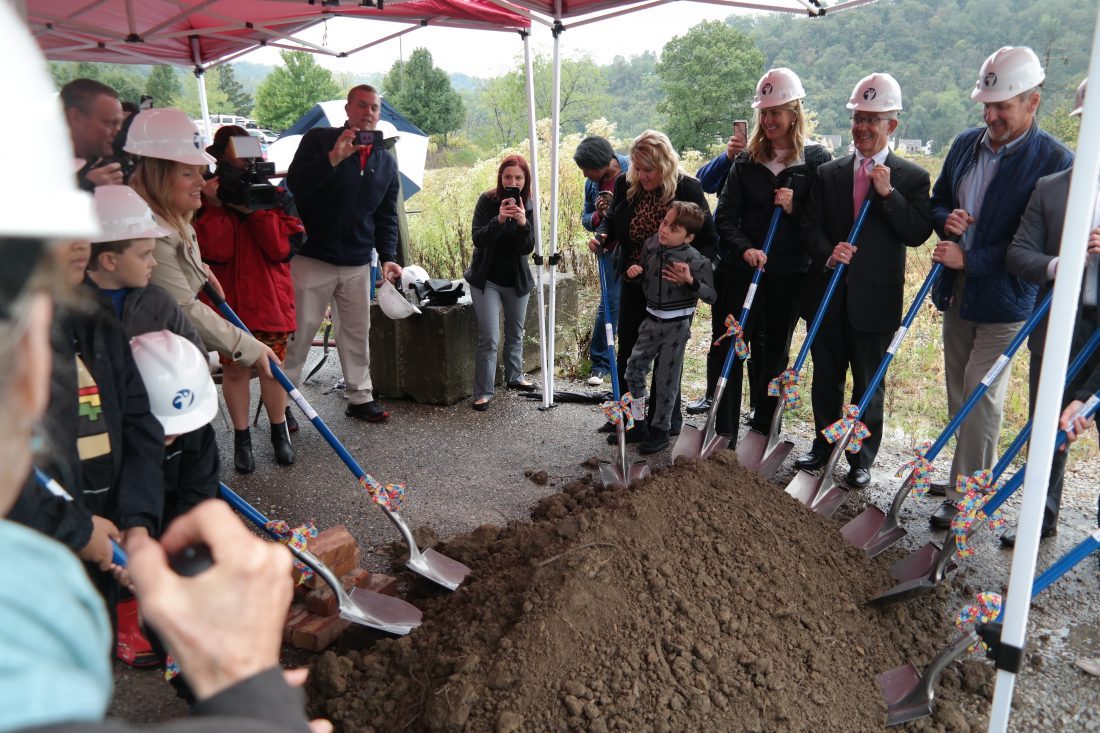 IT ALL STARTS WITH A SHOVEL OF DIRT — Students and staff of the Augusta Levy Learning Center, as well as Wheeling area officials, broke ground Monday on the school’s new facility near Woodsdale. -- Staff photo

WHEELING — More than a year after a fire displaced the Augusta Levy Learning Center from its longtime location, staff, students, parents and Wheeling area officials celebrated a “rise from the ashes” Monday with a groundbreaking ceremony.

Amid the rainy weather, attendees celebrated the start of construction on the center’s new facility on a hilltop south of Woodsdale dubbed the “Fortress for Heroes.”

The new building will serve as a permanent home for the school, which serves children with autism, and allow it to expand its programs, enroll more students and hire more teachers. Construction is expected to be completed by next summer.

“Today as we break ground on our new home, we push our expectations,” said Angela Wood, executive director of the center. “This magnificent building is coming together brick by brick to assemble our fortress. It is a symbol of hope for our families, students, staff and community, that without them we would not be able to rise from the ashes and build a fortress for heroes.”

The building will be part of a development project on Anthoni Avenue led by Jonathan Bedway of the Bedway Development Corporation. Center staff worked with Bedway and an architect to design a space specifically for students’ needs.

“As we mark the beginning of construction, we reaffirm the ideals for which this building will stand,” said Staci Stephen, director of development at Augusta Levy. “For decades to come, our center will serve the needs of individuals with autism by providing them with a state of the art learning center that will allow them to excel in all aspects of learning while propelling them to reach their highest potential.”

The new facility will feature eight large classrooms, eight individual classrooms, a living skills room, a sensory room and an occupational therapy room, Wood said. It will be named the James and Sue Porter Building in honor of one of the center’s first employees and her late husband.

The Learning Center was established in 2005 at the Zion Lutheran Church in Bethlehem. In 2008, it moved to the bottom floor of the Sacred Heart Church in North Wheeling and served students around the Ohio Valley for nearly a decade. Then, in July 2018, a fire destroyed the church and the school’s space.

“When the devastating fire destroyed the entire building along with nearly everything we had … we were wiped out,” said founder Kathy Shapell. “We were in shock. It was painful and traumatic. And yet in typical Augusta Levy fashion, the leadership and staff’s first thoughts were to our children.”

“Our hope was to find a space that would also allow us to serve even more children from our waiting list, and we have finally found that space,” Wood said. “We could not have done any of this without the community support and we cannot thank you enough.”

Attendees at the ceremony heard from several Wheeling officials, including Wheeling Heritage Director Arch Riley, one of the center’s founding board members.

“I can’t tell you how much as a parent of a disabled child we found a sense of comfort and well-being in being able to readily access best practices for the treatment of our child,” Riley said. “It changed the life not only of our daughter but of our family and that remains the goal of the staff and board of directors.”

Remarks from Gov. Jim Justice were also read at the event.

“The staff at the center, community members, parents and all involved in making this dream a reality should be applauded for their dedication and hard work, as they’re excellent examples to all of us,” read the statement from Justice. “I am positive this center will be successful for many years to come.”

Augusta Levy also recently launched a fundraising campaign that will help pay for the building, program expansion and scholarship support. The center has already raised nearly $1 million with a goal of raising $6 million by 2025.

“It is truly a dream come true for Augusta Levy Learning Center to finally have a home to call our own,” Shapell said. “For its entire history, (the center) hasn’t been about a building or a classroom or a space, it has always been about children and autism. The children we work with are faced with unbelievable challenges and they tackle them like true super heroes.”