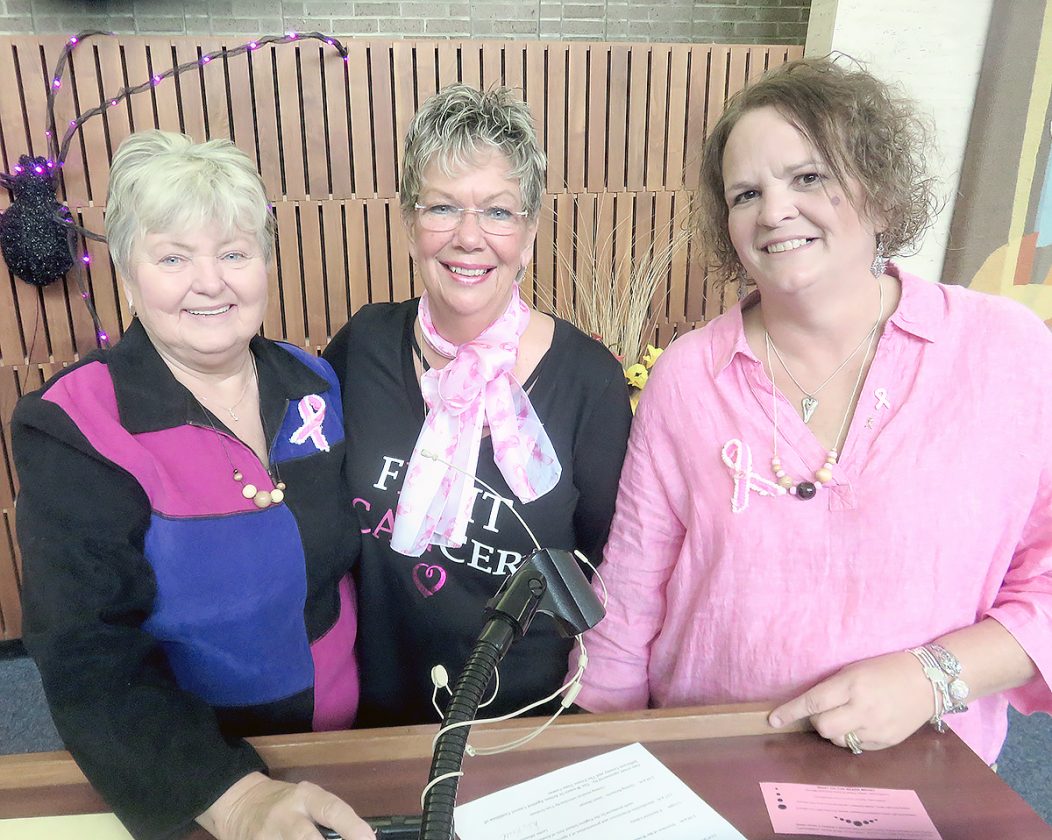 HER STORY — Sharon Miles of Steubenville, center, shared her survivor’s story during the 23rd-annual breast cancer awareness wreath ceremony held Wednesday at the Prime Time Center in Steubenville. With her are Janet Sharpe, left, and Leslie Aftanas, co-chairs of the Women in Action Against Cancer Coalition of Jefferson County, sponsor of the event in celebration and remembrance of those whose lives have been touched by breast cancer. -- Janice Kiaski

STEUBENVILLE — Sharon Miles of Steubenville celebrated being cancer free and credited God for the victory.

The ceremony is a staple of the Women in Action Against Cancer Coalition of Jefferson County during Breast Cancer Awareness Month observed in October.

Before a roomful of other breast cancer survivors, the former Sharon Mieczkowski said it was five days before her wedding on Dec. 23, 2017, to Reginald Miles, when she discovered a lump.

“I was scheduled for a routine physical, and I knew she was going to ask me, ‘Sharon, have you been doing breast self-exams?'” Miles anticipated her doctor’s question.

Miles said she didn’t want to lie, so she did so before the appointment. And that’s when she found it.

“We went through a bunch of tests and went on with the wedding and two days after the wedding, we got the official diagnosis, so chemo and radiation, the whole nine yards,” she said of her diagnosis on Jan. 2, 2018, as stage 3 metastatic breast cancer.

“To make a long story short, I have to give the glory to the Lord. I know he works through the doctors,” she said to a room erupting with applause. She also acknowledged the support of WIAACC and friends.

“I’ve just been blessed,” Miles said. “And I cannot say enough about the Teramana Cancer Center and my girls over at the mammography place,” she said, acknowledging representatives of Trinity Breast Imaging on hand, including RoseAnn Piofer, breast patient navigator, and Kristy Retton, mammography supervisor. “They were a godsend, but I know the Lord has blessed me.

“I am claiming a healing today. I am cancer free,” Miles said.

Janet Sharpe, coalition co-chair, extended the welcome, noting this year’s observance was especially poignant, given the coalition lost two of its members in Jean John and Kelli Knight, whose husband, Ralph, and son, Zachary, were in attendance. An in memorium table bearing their photos was on display.

“Breast cancer is treatable if detected early enough through breast self-exams and regular mammograms, starting at age 40 and above,” Sharpe noted. “Do it for your loved ones, if not for yourself.”

Dr. Aaron Provenzano of the Tony Teramana Cancer Center told the gathering that “What we tend to realize is breast cancer isn’t one exact type of cancer. It’s several different types of cancer, and this depends on the status of the cancer in regards to how it’s fed.”

Drugs such as Tamoxifen have brought success in preventing cancer from recurring, according to Provenzano.

“The most important thing is just to remember that mammography is vital and crucial as well as self breast exams. With yearly mammography and early detection, the majority of breast cancers are curable. In addition to that, once a breast cancer is found and removed, if it is estrogen-sensitive, we are able to use the pills that I talked about to decrease the occurrence up to 50 percent, which is quite meaningful,” Provenzano said.

“Many would ask me what can I do to try to figure out what is my chance of breast cancer?” he said, explaining that there is a calculator many women may not know about. He encouraged women to check out the National Cancer Institute’s Gail Risk Model Calculator, a tool that can estimate a woman’s risk of developing invasive breast cancer.

“As far as advances now in breast cancer treatments, what we’re learning is that in cases even where we’re unable to cure, we’re extending life much longer by staggering treatments and switching from one treatment to another as we’re able to find out which is more effective for each patient,” he said.

“We have shown that screening mammography does save lives,” she said.

Cindy Misogiane, a coalition member, provided an overview of the coalition, which was founded in July 1994. It is a community-based, nonprofit organization that started as a result of the high incidence and mortality rates of certain cancers in the Jefferson County area.

WIAACC focuses on increasing awareness, providing education and promoting early detection and prevention of cancer in Jefferson County with its mission being to encourage and motivate individuals to take charge of their health.

Its grassroots efforts, according to Misogiane, help residents become more aware of when and where to seek early detection for cancer, how to proceed when cancer is diagnosed, how to navigate through an increasingly complex health care system and where to turn for community resources and support for survivors. “Key to the process of WIAACC is the talent and commitment of our members,” she said.

The coalition helps women who need financial assistance to get breast and cervical screenings, with services provided at the Women’s Health Center and Trinity. Funding for that is generated through the coalition’s Bikers Against Breast Cancer poker run; a bake, book and soup sale in partnership with St. Stephen’s Episcopal Church in Steubenville; and donations from businesses, including Mountainer Casino, Racetrack and Resort, Steel Valley Credit Union, Softite Credit Union and Riesbeck’s brown bag lunch program.