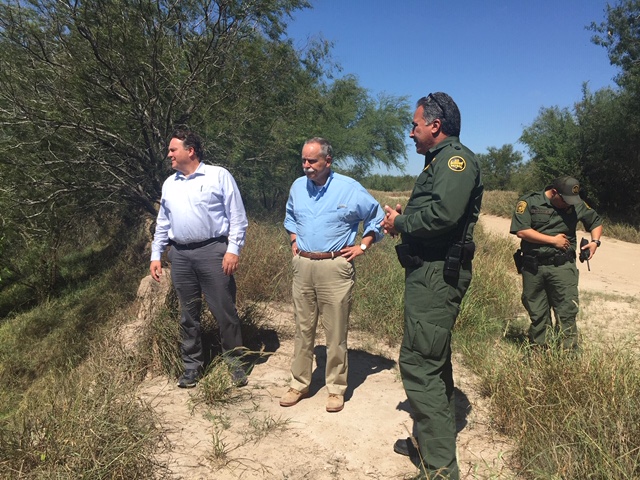 AT THE BORDER — U.S. Rep. David B. McKinley, center, joins agents with the U.S. Border Patrol near McAllen, Texas. -- Contributed

WHEELING — At least $53 million a week in illegal drugs cross the Mexican border into the U.S. each week, and more border agents are needed at the U.S.-Mexican border to stop this, according to U.S. Rep. David B. McKinley.

McKinley, R-W.Va., recently traveled to the U.S.-Mexican border to learn about the issue there first hand. He visited the McAllen, Texas region in the Rio Grande District of the U.S. Border Patrol.

He commended the work of the border agents.

“They put themselves in danger and try to keep the border clean and secure. They’ve done that for decades,” McKinley said. “What has compounded this is the humanitarian crisis. We didn’t always have so many people trying to cross illegally.”

The agents attempt to still do their security job, put many are being pulled off the line to take care of the humanitarian crisis.

He spoke with immigrants detained at the border who told him they paid the cartel anywhere from $3,000 to $9,000 to get them across the border. Often, part of the deal is that the immigrant carry illegal drugs with them on the journey.

If the immigrants are captured, they are sent back to their village and must start over again and seek help from the cartel, McKinley said.

“One of the border officers said they (the cartel) might be making as much money on this as they are on drugs,” he said.

Border guards have a lot of tools to help track immigrants crossing into the U.S., even if they don’t have the manpower to stop all of them, according to McKinley.

The entire U.S.-Mexico border is about 2,000 miles long, while the Rio Grande District agents focus on a specific 300-mile area. Sections of the Rio Grande River are narrow, and often the water is so low immigrants can walk across it. Border guards showed McKinley the footsteps in the mud where some had walked across the night before.

Where there isn’t a wall, cameras and sensors are placed to indicate when an immigrant is coming across the border.

But the cartel knows when agents could be as far as 10 miles away from a possible passage and unable to stop it. That’s when they help immigrants cross into the U.S., according to McKinley.

Nearly a million immigrants were stopped at the border before entering the U.S. last year, he said. Rio Grande District agents were responsible for 399,000 of the arrests, but they know from their technology they missed at least 47,000 immigrants in their crossing.

Many of these immigrants entering the U.S. carried opioids, according to McKinley.

“(Border agents) say you’ve got to pay attention to this — $53 million a week is coming across the border in drugs,” he said.

To compare, the state of West Virginia recently received $28 million for opioid rehabilitation, treatment and education.

“Almost twice that amount comes across the border each week — to put it into perspective,” McKinley said.

Coalition back in ‘action’