Navy Week celebrated in W.Va. for the first time 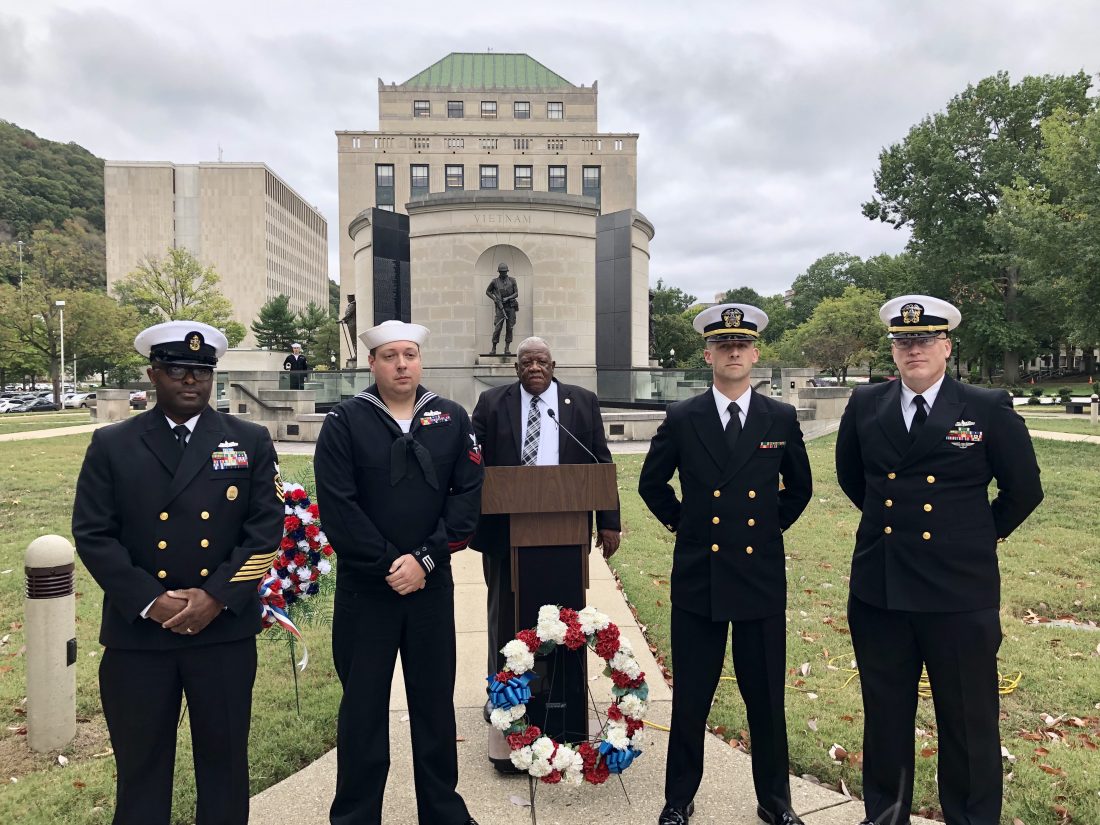 NAVY WEEK — Dennis Davis, secretary of the West Virginia Department of Veterans Assistance, center, is joined by sailors and officers for a wreath-laying ceremony as part of Navy Week. -- Steven Allen Adams

CHARLESTON — The U.S. Navy, known for sailing the seven seas, is in landlocked West Virginia this week hoping to foster closer relations with the state and namesake for several history-making ships.

For the first time, Navy Week is being celebrated in West Virginia. Events kicked off Monday in Charleston with a proclamation ceremony from the City of Charleston. Tuesday, sailors and officers were joined by state officials and Woody Williams, the last remaining World War II Medal of Honor recipient from the Pacific theater, to lay a wreath at the Veterans Memorial on the grounds of the Capitol.

“This is what the military is all about. This is what the Navy looks like,” said Dennis Davis, secretary of the state Department of Veterans Assistance, flanked by naval officers and sailors. “I want you to see that in person. I want to say to each and every one of these Navy personnel we have here first of all, thank you for your service. It means everything to us in this country.”

Williams, a retired chief warrant officer in the U.S. Marine Corps who was at Guadalcanal, Guam, and Iwo Jima — where his actions earned him the Medal of Honor — praised the Navy for protecting the rights and freedoms of West Virginians.

“Since I couldn’t walk on water, the only choice I had getting overseas was the Navy had to take me,” Williams said. “Thank you, Navy, for a safe journey.

Anne Urling, deputy chief of staff to Gov. Jim Justice, presented the Navy with a proclamation before joining Susan Goodfellow, director of Energy and Environmental Readiness for the Chief of Naval Operations. Goodfellow said the week is an opportunity to show the public what the Navy does.

“Navy week is all about outreach from the Navy to the American public,” Goodfellow said. “It’s a chance for them to meet us, us to meet them, and us to be able to demonstrate what it is that America’s Navy does for the average American person.”

Despite being landlocked, West Virginia has several naval connections. There have been three naval ships named for the state, including the battleship USS West Virginia. The ship was sunk when the Japanese attacked Pearl Harbor on Dec. 7, 1941. The ship was later repaired and saw combat in the Pacific theater in 1944 toward the end of World War II.

The Navy also operated a research station at Sugar Grove in Pendleton County which monitored secure communications by the Soviet Union during the Cold War. The base was closed in 2015.

“We cover this huge amount of territory around the world and our bases are spread around the globe, but when it comes back to the United States — back to the Heartland of America — we have a tendency to stop our concentrations the coasts,” Anderson said. “Coming here, it’s our hope to just have that conversation, meet the people of West Virginia, and share that knowledge and moment with them so that they can be better equipped as they go forward to know who we are.”

Charleston was one of 14 cities selected to host Navy week in 2018 and is the last event for the Navy this year. The Navy scheduled more than 20 events in the Charleston area, culminating Friday at 6 p.m. with Navy on the Levee at Haddad Riverfront Park in downtown Charleston.

The event will feature the U.S Fleet Forces Navy Band, as well as the Navy’s Drill Team, demonstrations by Explosive Ordinance Disposal technicians, sailors from the Ohio-class submarine USS West Virginia, U.S. Naval Academy cadets, the Navy History and Heritage Command, and sailors from the historic frigate U.S.S. Constitution. The Constitution, also known as Old Ironsides, was made famous during the War of 1812 and is the oldest commissioned ship in the Navy.