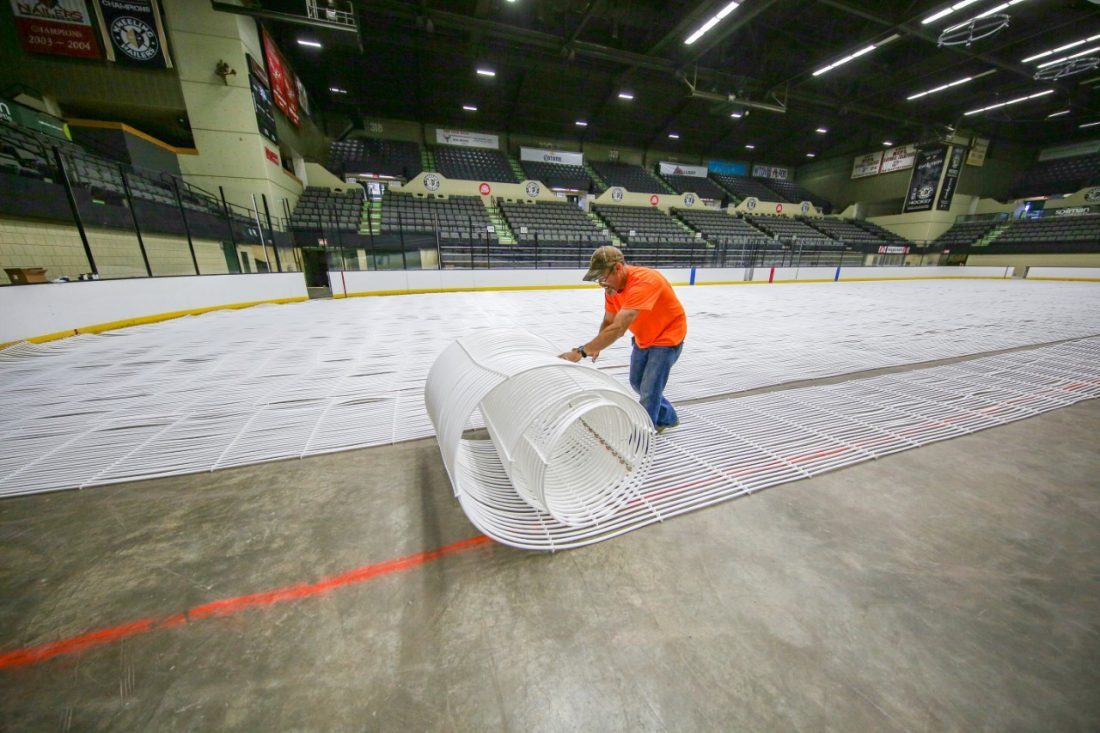 KEEPING IT COLD — A worker rolls out coils recently while installing a modular ice system at WesBanco Arena that can be used for many years. -- Contributed

WHEELING — John Burley immediately got to work late last month after speaking with WesBanco Arena officials about their broken ice-making system that could have jeopardized the Wheeling Nailers’ hockey season.

Now, several weeks later, the arena is outfitted with a modular ice system that should last for several years, up to 20 years if maintained properly, said Burley, the president and owner of Everything Ice.

Burley and his staff were able to install the ice system in three weeks in a process that typically takes four months to complete, a feat he dubbed a “miracle on ice.”

The new ice was fully installed by Wednesday, allowing the Wheeling Nailers to host their first home hockey game at the arena Saturday night.

The ice system cost about $330,000 to install. Wheeling City Council on Tuesday, meanwhile, heard first reading of an ordinance to transfer arena sales tax funds to WesBanco Arena to reimburse the cost.

The cost should actually present a savings to Wheeling, Burley said, as the new ice making system is more efficient — it makes ice faster — and will last for a long time.

Modular ice systems can be used as both temporary and permanent solutions for making ice in a rink.

WesBanco Arena announced Sept. 26 that a failure in the facility’s ice-making system occurred after staff began the process of forming it. The staff is still evaluating what caused the failure, WesBanco Arena Executive Director Denny Magruder said, and he believes it occurred under the arena’s floor.

While the arena’s original system was embedded in the concrete floor, the new modular system is above ground, which allows it to form ice more quickly.

“The system they have there served them well for a period of time, but the new system is of a quality that will match any facility,” Burley said.

Burley said Everything Ice, based in Johnstown, Pa., has installed ice in rinks around the world, from Dubai to an Inuit town in Northern Canada. The company has completed more than 1,000 ice rink projects since it was founded.

In future years, the city and the Sports and Entertainment Authority Board will work to determine how to finance a permanent ice-making system for the arena, Magruder said previously. The new ice system will allow that process to be less rushed, Burley added.

“The ice is of a perfect consistency,” Burley said. “If it stayed on the floor and wasn’t touched, it would be there for 40 years before any kind of mechanical breakdown.”