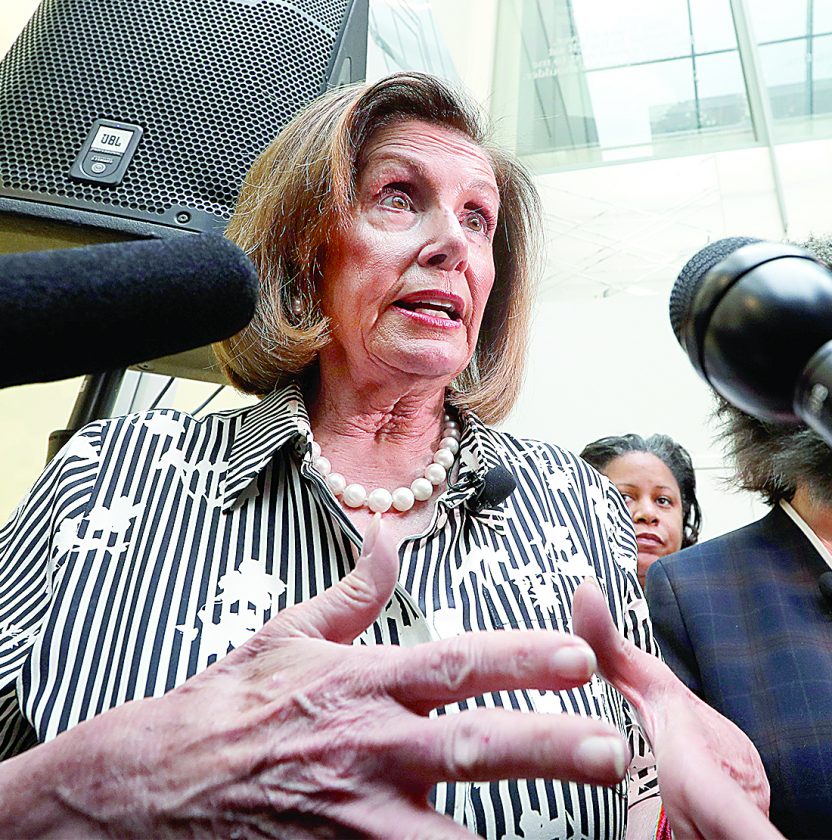 ‘YOU WILL BE HELD ACCOUNTABLE’ — Speaker of the House Nancy Pelosi, D-Calif., talks with media members Tuesday after speaking at Harborview Medical Center in Seattle about lowering the cost of prescription drug prices. -- Associated Press

His refusal to honor subpoenas or allow testimony would likely play into a formal accusation against him.

The letter sent to House leaders by White House Counsel Pat Cipollone Tuesday evening declared the president would not cooperate with the investigation — a clear reason, Democrats say, to write an article of impeachment charging him with obstruction.

The White House insists that a formal House vote is necessary just to start the impeachment process. But Democrats are moving ahead without one, confident for now that they are backed by the Constitution and Trump’s own acknowledgements of trying to persuade a foreign government to investigate a political foe.

“The White House should be warned that continued efforts to hide the truth of the president’s abuse of power from the American people will be regarded as further evidence of obstruction,” said House Speaker Nancy Pelosi in response to the letter. “Mr. President, you are not above the law. You will be held accountable.”

Trump again defended his decision not to cooperate, calling a whistleblower’s complaint about his call with Ukraine’s leader “a fraud being perpetrated on the American public” and saying Republicans are being treated unfairly. He repeated he was being vilified for “a perfect phone call.”

But the president also undercut his no-cooperation argument Wednesday by putting conditions on his willingness, saying he would cooperate only if the House held a vote and Democrats would “give us our rights.”

Bolstered by polls showing increased public support for impeachment, Pelosi has shown no signs of shifting her strategy. Democrats plan to continue investigating while focusing on the president’s own acknowledgements that he asked Ukrainian President Volodymyr Zelenskiy to investigate his country’s involvement in the 2016 presidential election and also political rival Joe Biden and his family.

“The evidence provided by the president and his people has already been overwhelming,” even without additional witness testimony, said Connecticut Rep. Jim Himes. Himes is a Democratic member of the House intelligence committee, which is leading the Ukraine investigation.

The intelligence panel, along with the Foreign Affairs and Oversight and Government Reform panels, subpoenaed Gordon Sondland, the U.S. European Union ambassador, on Tuesday after Trump’s State Department barred him from showing up at a scheduled deposition. Texts provided by another diplomat last week showed Sondland and others navigating Trump’s demands for investigations as they spoke to Ukrainian government officials about a possible visit to Washington.

Trump’s stonewalling of impeachment comes as polls find that Americans are more likely to approve than disapprove of the inquiry, even as they divide on whether Trump should be removed from office. A new Washington Post-Schar School poll finds 58% supportive of the decision by Congress to launch an impeachment inquiry that could lead to Trump being removed from office. About half of all Americans also think Congress should remove Trump from office.

Still, the White House signaled it would not give an inch. Trump has taken to Twitter frequently to bash the probe, charging that the inquiry is not about anything more than partisan politics.

“The Do Nothing Democrats are Con Artists, only looking to hurt the Republican Party and President,” Trump wrote. “Their total focus is 2020, nothing more, and nothing less.”

After two weeks of an unfocused response to the impeachment probe, the White House letter amounted to the first volley in a strategy that is more defined — but one that carries its own risks.

“All that defiance does is add to the case” against the president, including obstruction of Congress, said Virginia Rep. Gerry Connolly, a Democrat who sits on the Oversight and Foreign Affairs panels. He said the White House strategy actually works to convince the public of the president’s guilt, citing the recent polls.

But Trump allies both inside and outside the West Wing were pleased at the shot the letter represented.

They argue their best chance at winning the politics of impeachment is to emulate the just-say-no tactics they used for much of the special counsel’s Russia probe and against other investigations launched by Democrats in the House majority.

By making the fight as contentious as possible, the White House hopes to convince voters that the impeachment process is simply about politics. They also want to push the proceedings into next year, when the first ballots of the 2020 primaries are cast. That would make it easier for Republicans to demand that impeachment be put aside in favor of letting the voters decide in November.

He also said that the impeachment fight will end up in the Supreme Court, but it’s unclear whether Democrats will go to court at all and risk long delay. They could simply move to an article of impeachment on obstruction.

Aware of the risks, Democrats are planning to move quickly — unlike the two-year Russia investigation, which Republicans had ample time to try and discredit. Multiple subpoenas sent by the House panels — including to the White House, Cabinet agencies and Trump lawyer Rudy Giuliani — came with a deadline to respond within the next two weeks.

As the House returns from a recess next Tuesday, the Democrats plan to hold hearings and votes to make their case, including legislation designed to improve the security of elections and prevent foreign interference. But they are so far declining to hold high profile hearings featuring fierce, argumentative allies of the president, including Giuliani, who was involved in the negotiations with Ukraine.

Democrats believe the president’s own words are paramount to impeachment and don’t want to distract from that.

But they will also continue to investigate.

“I think what we have is overwhelming evidence that the president has engaged in multiple wrongdoings,” said Florida Rep. Val Demings, a member of both the intelligence and Judiciary panels. “But what we don’t know is how much more is out there.”