Black Friday kicks off scramble in a shorter shopping season 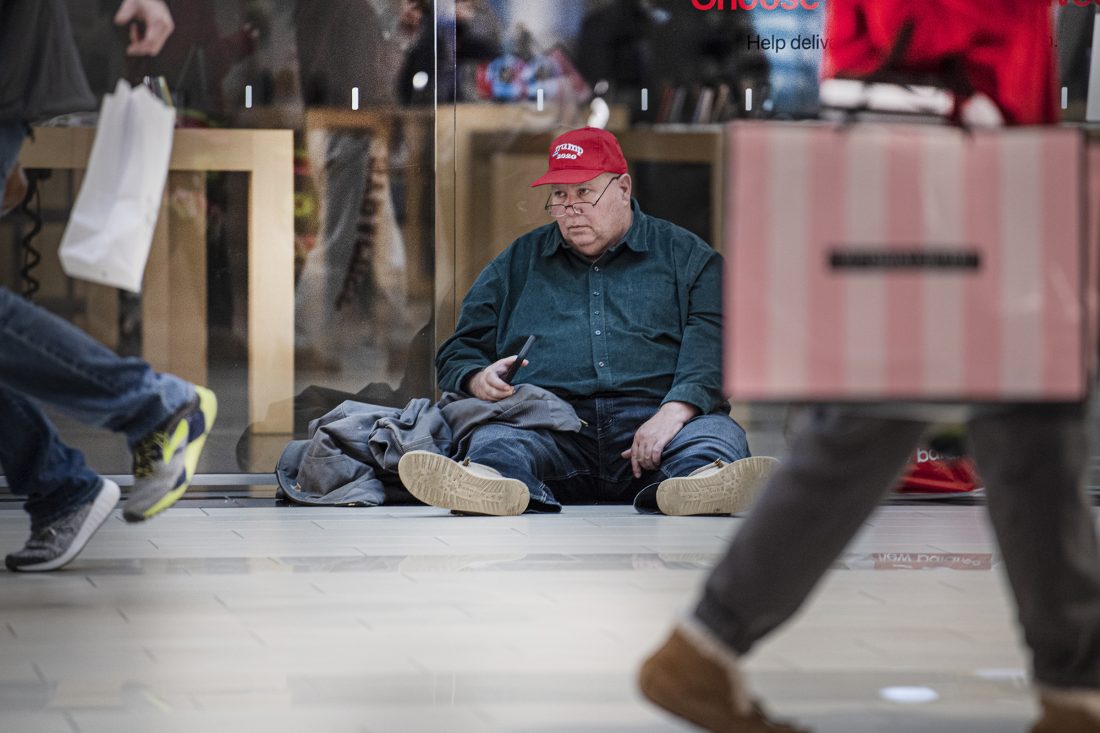 Jefrey Wojtisek sits on the floor as he awaits for the Apple store to open their doors on Black Friday at the King of Prussia Mall in King of Prussia, Pa. Friday. -- Associated Press

NEW YORK (AP) — Black Friday enthusiasts woke up before dawn and traveled cross-state to their favorite malls in search of hot deals, kicking off a shortened shopping season that intensified the scramble between Thanksgiving and Christmas.

But the ever-growing popularity of online shopping and holiday discounts that started weeks earlier dampened the frenzy. This year, more people got a head start on gift-hunting, lured by deals from retailers trying to compensate for the shorter season.

The shopping season is the shortest since 2013 because Thanksgiving fell on the last Thursday in November — the latest possible date it could be.

Shoppers up since the wee hours slept in chairs at Nashville’s Opry Mills mall, known for its outlet stores. Outside, deal-seekers were still fighting for parking spots by midmorning.

Haley Wright left Alabama at 4 a.m. to arrive at the Tennessee mall by 7 a.m. She makes the annual trip because she says the stores offer better deals and a more fun environment than the shops back home.

“I let my husband do the online shopping; I do Black Friday,” she said.

The National Retail Federation, the nation’s largest retail trade group, baked the shorter season into its forecast, but it says the real drivers will be the job market. It forecasts that holiday sales will rise between 3.8 percent and 4.2 percent, an increase from the disappointing 2.1 percent growth in the November and December 2018 period that came well short of the group’s prediction.

NRF expects online and catalog sales, which are included in the total, to increase between 11 percent and 14 percent for the holiday period.

Last year’s holiday sales were hurt by turmoil over the White House trade policy with China and a delay of nearly a month in data collection because of a government shutdown. This year’s holiday forecast is above the average holiday sales growth of 3.7 percent over the previous five years.

Marshal Cohen, chief industry analyst at market research firm NPD Group Inc., says he doesn’t believe a shorter season will affect overall sales. But early discounts will likely diminish Black Friday’s impact, he said. In terms of the busiest day of the year, it will be a toss-up between Black Friday and the last Saturday before Christmas.

“We still have the same amount of money to spend regardless of whether the season is longer or shorter,” he said.

More than half of consumers started their holiday shopping early this year, and nearly a quarter of purchases have already been made, according to the annual survey released by the NRF and Prosper Insights & Analytics.

Kara Lopez and Jeremy Samora arrived at Denver’s Cherry Creek Shopping Center as soon as it opened Friday to snag deals on candles and lotions at Bath & Body Works.

A half-hour later, they sat with their purchases sharing a thermos of hot chocolate, a tradition Lopez started years ago when she had to wait in line for the store to open and the first shoppers inside got gifts like stuffed animals. It’s more relaxed these days, but Lopez likes it that way.

“I like the mall but not when it’s full of people,” she said.

Adobe Analytics predicts a loss of $1 billion in online revenue from a shortened season. Still, it expects online sales will reach $143.7 billion, up 14.1 percent from last year’s holiday season.

Adobe Analytics said Thanksgiving Day set records for online shopping. Consumers spent $4.2 billion on Thanksgiving, a 14.5 percent increase from the holiday a year ago. Black Friday was on track to hit $7.4 billion.

As online sales surged, some retailers including Costco.com and H&M grappled with brief outages, according to technology company Catchpoint.

In Europe, though, Black Friday drew a backlash from activists, politicians and even consumers who criticized the U.S. shopping phenomenon as capitalism run amok. Climate demonstrators blocked a shopping mall near Paris and gathered in front of Amazon’s headquarters. Workers at Amazon in Germany went on strike for better pay. Some French lawmakers called for banning Black Friday altogether.

In the U.S., attention Friday turned to malls, which are fighting for traffic as online shopping grows.

At Mall of America, the country’s largest shopping mall, crowds were expected to exceed the 240,000 count on Black Friday from a year ago, said Jill Renslow, senior vice president at the Bloomington, Minnesota-based mall.

Maria Mainville, a spokesman at Taubman Centers, which operates a little over 20 malls in the U.S., says that its centers reported that customer traffic has been strong since earlier this week. That’s different from last year when Black Friday and Thanksgiving drew the majority of the crowds for the period.

At some malls, some shoppers were surprised at the relatively thin crowds.

“It looks empty for Black Friday,” said Latoya Robinson, a student who lives in New York and planned to stop by Forever 21 and Macy’s to shop for herself.

In Kansas, Kassi Adams and her husband drove 50 miles to Town East Mall in Wichita, even though the couple were nearly done with their holiday shopping. They were surprised to see how few people were there and even boasted about getting a choice parking spot.

“There is really not much of a crowd to fight,” she said.