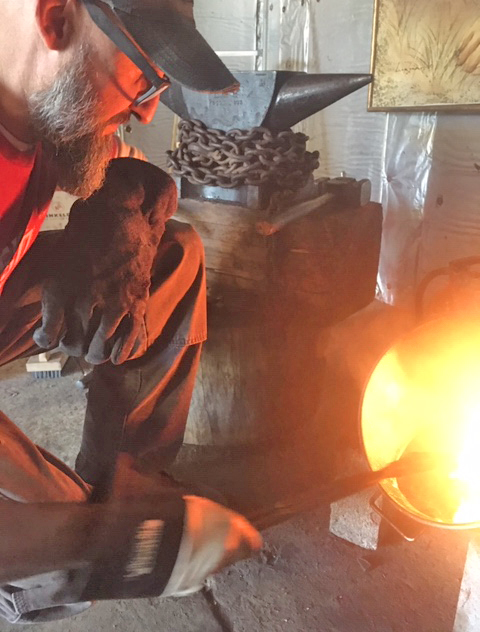 HARDENING THE BLADE — Tommy Matthews, owner of Crooked River Forge dips a knife into a bucket of oil immediately after removing it from his forge to cool the steel down and to harden it, in the process called quenching. -- Julie Riedel

CHESTER — Tucked away in a little red barn off of state Route 8 sits a modern blacksmith shop, anvils, welders, and a bucket of oil along with two propane-powered forges.

Crooked River Forge opened in Cleveland in 2015, after owner Tommy Matthews lost his job as a sales manager, and he decided that was his time to pick his hobby up full time.

“I always had to keep busy, I worked a corporate America day job,” said Matthews. “I was working at an electrical estimating company and I was a sales manager there and they let me go and I was just getting into this pretty hardcore. So I decided that I was going to do it full time, and then Forged in Fire came along and that just kind of catapulted my career.”

Forged in Fire is a television show filmed by the History Channel, where four bladesmiths compete in three rounds recreating historical weapons. After each round a panel of judges reviews the competitors’ work and one is eliminated.

Matthews applied to season two of Forged in Fire, but they told him he needed more experience. Season two aired in 2016, and Crooked River Forge opened in 2015. Matthews continued to make knives and post them to his social media accounts. Eventually he got back in contact with Forged in Fire, and ended up in season five. Matthews was in episode 36, which aired on Nov. 14, 2018.

For winning his episode, Matthews received the title of Forged in Fire champion and $10,000. His work is on display at the Forged in Fire studio, including the Persian take down bow that he won the final round with. He did make himself a replica to show friends and family.

“I’m proud of it. I think I did pretty well with it. It shoots good,” said Matthews. “My buddies want me to use it for hunting, but I’m not that confident with a recurve (bow).”

Del. Randy Swartzmiller, D-Hancock, met Matthews at the 2018 Gate Five Industrial Art Festival in Weirton. Matthews had a table set up with some of his knives.

Matthews goes to festivals and shows when he can. On occasion he’ll bring his smaller forge and anvil with him, but he’s gotten away from traveling with his equipment because it’s heavy.

Swartszmiller said he’s watched Forged in Fire for years, and told Matthews he should apply to the show. Swartzmiller described Matthews as brushing the compliment off. At that time Matthews had already completed filming, but he couldn’t say that because of the contract he signed for the show. Swartzmiller reported shortly after that interaction, his wife told him someone from West Virginia was competing on the show; it was Matthews.

“He definitely has a lot of talent for what he does, and when he won Forged in Fire it just showed he could compete with anyone in the country and win. We were all so proud of him for representing the community the way he did,” said Swartzmiller.

Swartzmiller said he hasn’t bought a knife yet, because he can’t decide which one he wants.

“I don’t believe this is the last chapter for Tommy (Matthews), and I believe he’s going to go on to bigger and better things with Crooked River Forge,” said Swartzmiller.

Before becoming a bladesmith, Matthews made pallet furniture. He got into blacksmithing because he wanted to add metal work to his furniture. The first thing he made was a knife, and he fell in love with the process. He doesn’t really make furniture anymore.

“I got yelled at once when I was just getting started by a friend of mine, I was carrying a little pocket knife that one of my stepkids had bought me a while back, and said ‘what’s the deal with you? You’re a knife maker but you don’t carry one of you’re own knives.’ So ever since then I always carry one of my own.”

Matthews lived in Cleveland for about 20 years, but after some life changes he moved back to Chester, just to be closer to family and friends. Crooked River Forge opened in it’s current location earlier this year.

Patrick Arneault, co-owner of Backwaters Tactical Range and Outdoor Training Center, reported being a Forged in Fire fan, and owns a couple of knives made by Matthews. His favorite is the chicken hawk knife.

“They’re outstanding, the craftsmanship, the look and the product is a functional, practical piece of art. All of the stuff he makes is functional throughout and looks amazing”

Arneault met Matthews about a year and a half ago. They have a mutual friend, and when Matthews came back to the area he was looking for a place to shoot. Both have military backgrounds, and hunt, resulting in the two becoming friends.

Arneault said he recently hosted a long-range shooting contest at Backwaters Tactical Range and the grand prize was a custom-made knife by Matthews.

“It’s really good to see a local person reach that kind of level in his chosen art and then come home, and he’s out in the community which is a plus.”

Crooked River Forge makes handmade hunting knives, cooking knives and sheaths. Matthews will make other kinds of blades, but he specializes in knives. He custom makes the blades, handles and sheaths. He’s become known for the detailing on his blades, and Matthews often picks a theme for the knife. He’ll also match the sheaths’ thread to the handle.

“I always used to take stuff apart as a kid and very rarely get it back together, but I built models and all that kind of stuff, and I was always out in the woods, so I’m kind of outdoorsy artistic.”

He uses new and repurposed materials, like old saw blades for the steel. He also has a box brimming with deer antlers to use as handles.

When Matthews is working he is bouncing around the various stages of knife making, resulting in knives of all stages being scattered around his shop. He has metal waiting to be transformed, headless blades, knives sitting on his workbenches, others tucked into cases, some waiting to be ground to an edge, while others are just waiting for their owner to pick them up. He said he usually makes batches of 10 to 15 knives at a time. Matthews sets his hours, but can typically be found in his shop from about 7 a.m. to 5 p.m. during the week.