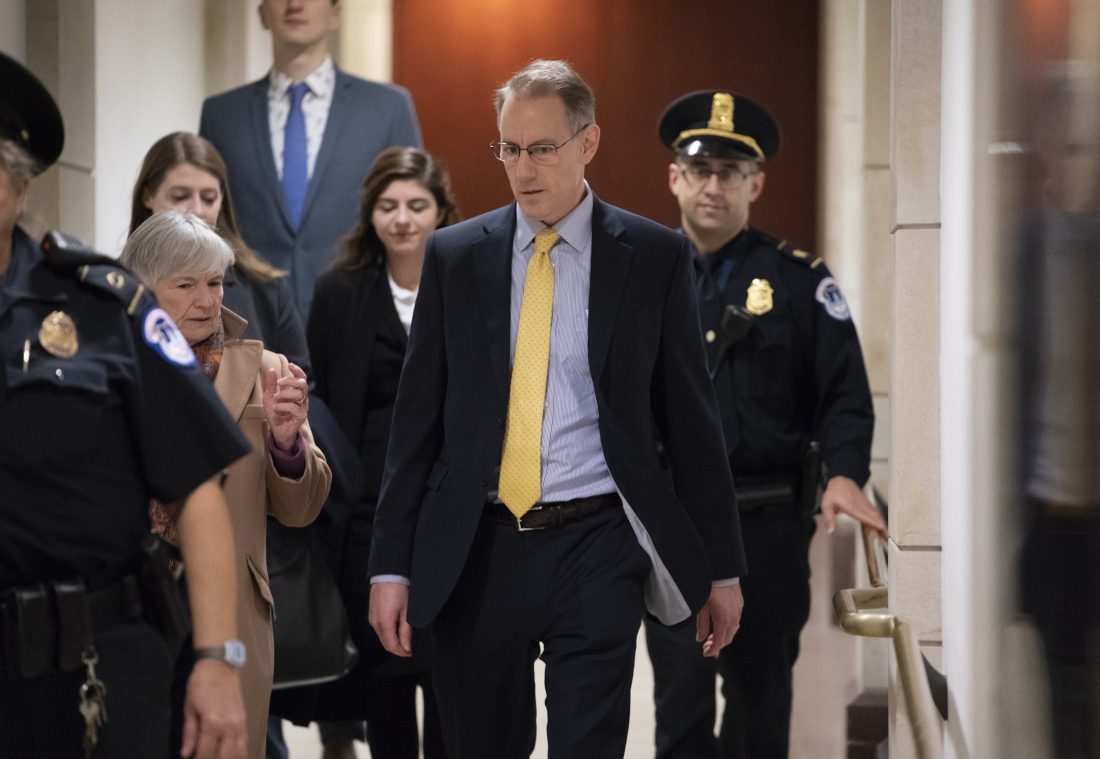 Mark Sandy, a career employee in the White House Office of Management and Budget, arrives at the Capitol to testify in the House Democrats' impeachment inquiry about President Donald Trump's effort to tie military aid for Ukraine to investigations of his political opponents, in Washington, Saturday. -- Associated Press

In a rare weekend session, lawmakers drilled into Trump’s decision, against the advice of national security advisers, including John Bolton, to withhold funding from the ally, a young democracy bordering hostile Russia.

It’s a sign of a deepening of the constitutional showdown, bookended by public hearings this week and next, that is testing the system of checks and balances in the U.S. government.

“It seems clear to me from everything that I’ve seen that the president had no interest in the defense of the Ukraine and the security of the Ukrainian people,” said Rep. Jamie Raskin, D-Md., during a break in the closed-door proceedings.

Raskin said it’s important for lawmakers “to trace the bureaucratic steps” that allowed money Congress had already approved to be upheld by the executive branch. “We’re in the process of chasing that down.”

The witness Saturday was Mark Sandy, a little known career official at the Office of Management and Budget who was involved in key meetings about the nearly $400 million aid package Congress had already approved for Ukraine.

Sandy’s name has barely come up in previous testimony. But it did on one particular date: July 25, the day of Trump’s call with Ukrainian President Volodymyr Zelenskiy at the core of the impeachment probe.

That day, a legal document with Sandy’s signature directed a freeze of the security funds, according to testimony from Defense Department official Laura Cooper. Investigators had shown her a document as evidence.

Trump on the call had asked Zelenskiy for a “favor,” to conduct an investigation into Democratic rival Joe Biden and his son.

The link between Trump’s call and the White House’s upholding of security aid is the central question in the impeachment inquiry.

Trump, who says he only wanted to root out corruption in Ukraine, says he did nothing wrong.

The weeks that followed sent officials in the U.S. national security and foreign service apparatus scrambling to understand why the aid was being blocked, despite their consensus view that Zelenskiy needed the money as a show of U.S. support for his new government facing down President Vladimir Putin’s Russia.

“We were trying to get to the bottom of why this hold was in place, why OMB was applying this hold,” Lt. Col. Alexander Vindman, an Army officer at the National Security Council, told investigators. He is scheduled to testify publicly on Tuesday.

Bolton derided the swap as a “drug deal” he wanted no part of, according to closed-door testimony from Fiona Hill, the former White House Russia expert. She is set to appear Thursday.

Sharpening the arguments, both sides are preparing for an intense lineup of public hearings in the coming week. Americans are deeply split over impeachment, much as they are over the president himself.

For Ukraine, a former Soviet republic situated between NATO-allies and Russia, the $391 million in aid is its lifeline to the West.

The money is symbolic, the ousted U.S. Ambassador to Ukraine Marie Yovanovitch testified this week, but also substantial.

An additional $141 million in State Department funding covers many of those systems as well as about $10 million to increase maritime awareness and $16.5 million for maritime security in the Black Sea, aimed at identifying and tracking Russian ships and aircraft.

“Supporting Ukraine is the right thing to do,” Yovanovitch testified. “If Russia prevails and Ukraine falls to Russian dominion, we can expect to see other attempts by Russia to expand its territory and influence.”

Sandy was the first official from the Office of Management and Budget to defy Trump’s instructions not to testify. Like others, he received a subpoena to appear.

“When people come in, we learn more,” said Rep. Eric Swawell, D-Calif., a member of the House Intelligence Committee, as he arrived for Saturday’s session.

Rep. Mark Meadows, a top Trump ally, said he did not expect to hear much from Sandy, a career budget official.

“All I expect him to say is he doesn’t know why the aid was held and wished that he did,” said Meadows, R-N.C. “But I may be surprised.”

In a speech Friday night, Attorney General William Barr said congressional Democrats were pursuing “scores of parallel investigations through an avalanche of subpoenas” that are “designed to incapacitate the executive branch.”

Barr, who favors an expansive view of executive power, said “the cost of this constant harassment is real.”

Rep. Adam Schiff, the chairman of the impeachment panel, returned home Saturday to California where thousands of Democratic activists greeted him like a rock star at the state party’s fall convention.

“It’s been an eventful week,” he told the crowd before saying that his remarks about impeachment were no cause for celebration.

“There is nothing more dangerous than an unethical president who thinks that he is above the law,” Schiff said. “This is a time of great peril.”