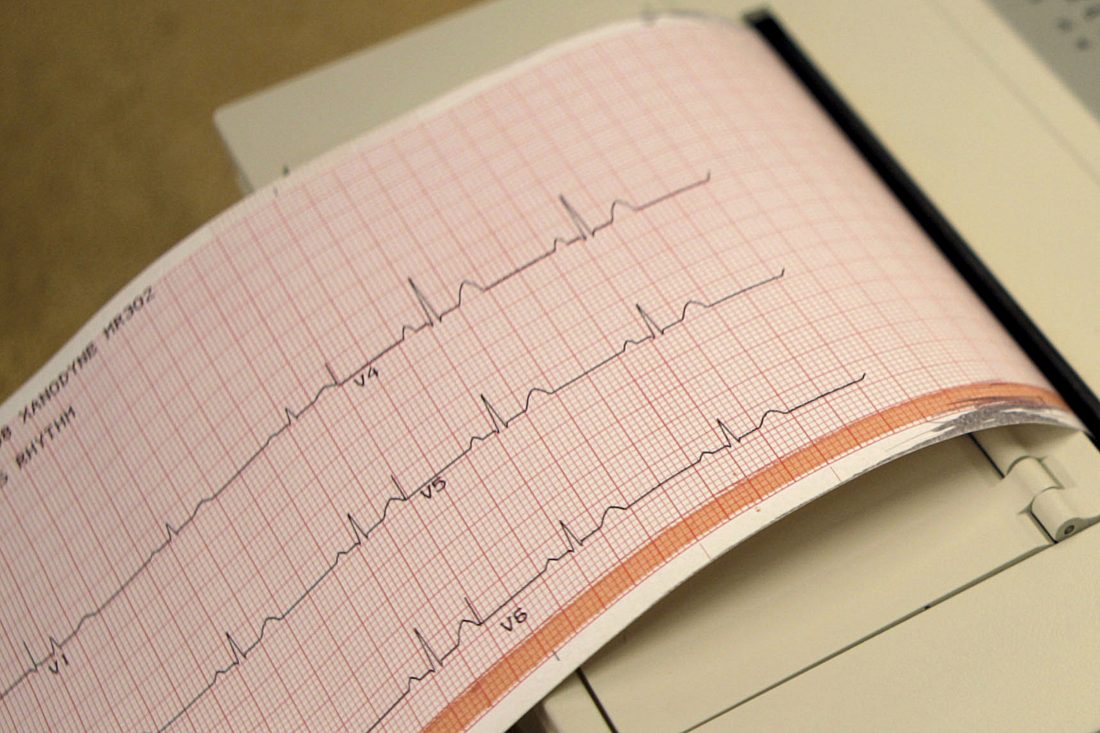 PRINTOUT — This May 26, 2009 file photo shows a printout from an electrocardiogram machine in Missouri. Doctors are reporting that novel drugs may offer fresh ways to reduce heart risks beyond the usual medicines to lower cholesterol and blood pressure. One new study found that heart attack survivors benefited from a medicine long used to treat gout. Gene-targeting medicines also showed promise in studies discussed Monday, at an American Heart Association conference in Philadelphia. -- Associated Press

One new study found that heart attack survivors benefited from a medicine long used to treat gout. Several experimental drugs also showed early promise for interfering with heart-harmful genes without modifying the genes themselves — in one case, with treatment just twice a year.

The research was featured at an American Heart Association conference ending Monday in Philadelphia.

“There’s a lot of excitement” about the new gene-targeting medicines, especially because they seem to last so long, said Dr. Karol Watson, of the University of California, Los Angeles.

Scientists have been exploring gene therapy — altering DNA — to attack the root cause of many diseases. The new drugs essentially accomplish the same thing without tampering with genes, said the University of Pennsylvania’s Dr. Daniel Rader, who has consulted for some makers of these drugs.

The medicines work by silencing or blocking messages that genes give to cells to make proteins that can do harm, such as allowing cholesterol to accumulate. The first few of these “RNA-interference” drugs recently were approved for other conditions, and research is also targeting heart disease.

Farthest along is inclisiran, tested in 1,561 people with heart disease from clogged arteries who still had high LDL, the bad form of cholesterol, despite taking standard drugs. They were given a shot of inclisiran or a dummy drug when they joined the study, three months later and then every six months.

The drug lowered LDL by 56 percent without serious side effects. More testing will show whether it also lowers heart attacks and other problems, not just cholesterol. Inclisiran’s maker, The Medicines Company, plans to seek federal approval for it later this year.

Two other RNA interference drugs aim at a different target — triglycerides, another fat in the blood that’s elevated in one quarter of Americans. Treatments include very low-fat diets, weight loss, fish oil and drugs, but doctors say more and better therapies are needed.

Each RNA interference drug was tested at various doses in 40 people. A single shot lowered triglycerides by 30 percent to 67 percent, and the benefit lasted for at least four months. The studies were just intended to show safety; Arrowhead Pharmaceuticals is developing both drugs.

Other research found new benefits from older drugs. AstraZeneca’s Farxiga, originally developed to treat diabetes, also lowered the risk of heart problems in heart failure patients who did not have diabetes. Among 2,605 of such patients treated for 18 months, about 9 percent of those on Farxiga had worsening heart failure or heart-related death versus nearly 13 percent of those not given the drug. That worked out to a 27 percent lower risk, without extra serious side effects.

Surprising benefits also were seen in a Canadian study of the decades-old gout drug. The anti-inflammatory drug colchicine — sold as Colcrys, Mitigare and in generic form — was tested in 4,745 people who recently had a heart attack.

After about two years, colchicine users had a 23 percent lower risk of suffering a new heart attack, heart-related death, stroke, cardiac arrest or urgent need for an artery-opening procedure compared with a group given dummy pills. The benefit came mostly from preventing strokes and artery-opening procedures, and some heart doctors would rather have seen more difference in heart attacks and deaths.

Colchicine is being tested in several other studies, and more evidence is needed before using it routinely to lower heart risks, Dr. L. Kristin Newby of Duke University wrote in a commentary published with the study in the New England Journal of Medicine.

“When you have a safe drug that’s easily available, it’s going to be hard to hold this one back,” he said.

The Associated Press Health and Science Department receives support from the Howard Hughes Medical Institute’s Department of Science Education. The AP is solely responsible for all content.