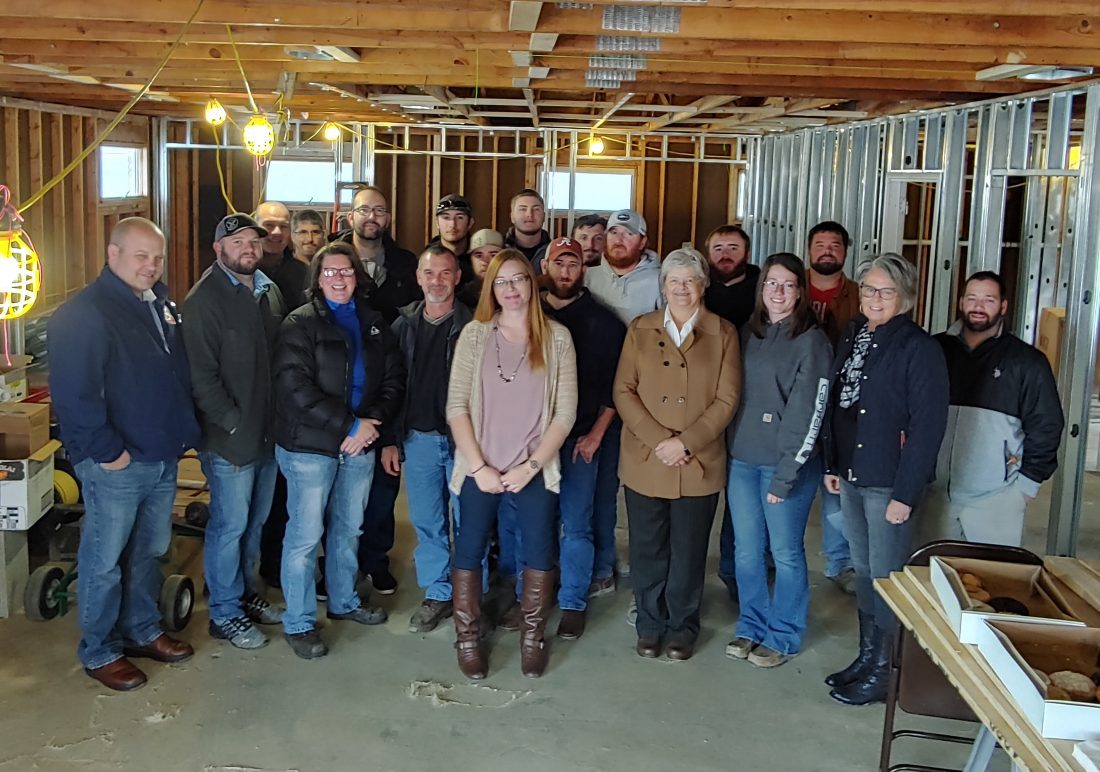 FOR A GOOD CAUSE — Those working together on the renovation of the Unity Center in Benwood gather for a group photo. -- Contributed

BENWOOD — A united effort between skilled trades and volunteers is making the renovation of the Unity Center drug rehabilitation center happen.

Members of Project BEST have joined Councilwoman Wendy Scatterday, an architect, in facilitating the project. The Unity Center is located at 4850 Eoff St. in Benwood.

Over the past two months Project BEST members have volunteered their time to gut the upper floor of the two story building. They have built stairs, re-studded walls and installed a new heating and ventilation system and windows. The upper floor is being reconfigured to make for one large meeting room that can be partitioned into three separate areas if needed, explained Bengy Swanson, co-chairman of Project BEST.

He estimates about 50 Project BEST members have donated their time doing the work, and received needed community service credits toward their internships. They include carpenters, iron workers, painters, laborers and pipefitters. Workers with JD&E Construction and United Electric also volunteered, while some Unity Center patient assisted wit the demolition.

About 1,000 manhours have been put in so far, and Swanson estimates another 2,000 hours will be needed to complete both the upper floor and then do work on the lower basement floor.

In the end, there will be additional one-on-one treatment rooms in the basement, as well as a children’s education area where youths can receive attention while their parents participate in treatment sessions.

Swanson said he was “apprehensive at best” when Scatterday and Mary Hess, executive director of the Unity Center, approached Project BEST to do the work.

“We had never taken on such a vast project under the Goodwill Committee at Project BEST,” he said. “But after an hour of listening to the two of them explain what the Unity Center provided for the area and its residents, (former Project BEST co-chairwoman Ginny Favede) and I agreed that we had to become involved in some capacity. Upon getting the blessing from the BEST Board, and calling upon the ironworkers, pipefitters, carpenters, painters, laborers, contractors such as JD&E and United Electric, we now find ourselves fully embedded in seeing this project through.

“At Project BEST, it’s all about promoting our profession, what better way than showing off our expertise in a cause that will help the community for years to come.”

With the completion of the renovations, The Unity Center will increase the number of support meetings held at the center and expand services. Classes in cooking and life skills, SNAP Benefit budgeting, menu planning, resume writing, interview training, and recovery coaches will be offered.

A children’s program is also being developed so that when children go to The Unity Center with their parents who are attending a support meeting, a specialist will be working with the children “as recovery is a family journey,” Hess said.

The remodel will include a coffee bar area and a recreation space for people to hangout and build their recovery support system as well as a quiet spaces to be used to one on one work with a sponsor or counselor.

“Project BEST has stood by their commitment to the community,” she said. “We are so excited that they are making it possible for us to expand our services to better serve our community sooner.”

Scatterday said she has been working with the Unity Center “for about two years” in planning the project. They approached her as she as been active in supporting drug addiction programs and treatment.

She — like all working on the project — is providing her services pro bono.

“Everyone is coming together, and it’s an example of what you can do when people do come together,” Scatterday said. “These people are helping people to change their lives, and are making a positive impact. You feel good, because you are involved with something bigger than yourself.”