Powerful storm pushes into Midwest with heavy snow and winds 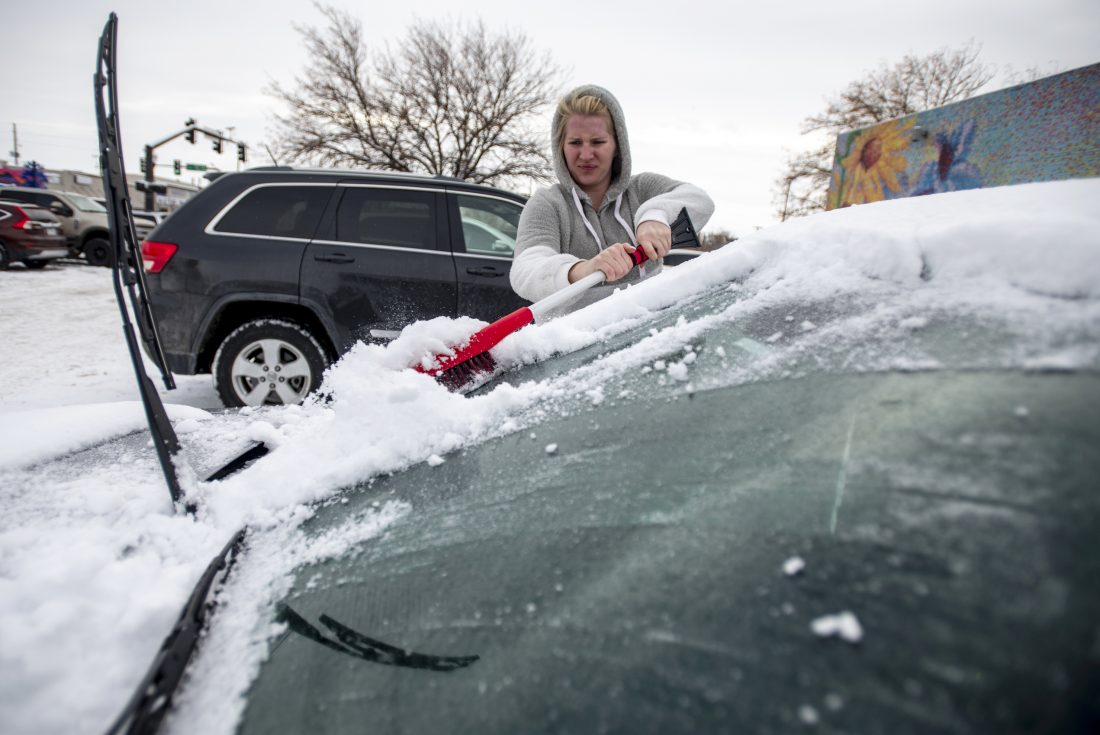 Brittany Culp brushes snow off of her windshield on a windy and snowy morning in Greeley, Colo., Saturday. The weather caused the city to cancel its annual Greeley Lights the Night parade, which was scheduled in the evening. -- Alex McIntyre/The Greeley Tribune via AP

Wintry weather bedeviled Thanksgiving weekend travelers across the United States Saturday as a powerful and dangerous storm moved eastward, dumping heavy snow from parts of California to the northern Midwest and inundating other areas with rain.

Authorities found the bodies of two young children, including a 5-year-old boy, and a third child was missing in central Arizona after a vehicle was swept away while attempting to cross a runoff-swollen creek. A storm-related death also was reported in South Dakota.

The National Weather Service said the storm was expected to drop 6 to 12 inches of snow from the northern Plains states into Minnesota, Wisconsin and Upper Michigan.

Blizzard conditions early Saturday were already buffeting the High Plains. The city of Duluth, Minnesota, issued a “no travel advisory” beginning at noon Saturday because of a major snow storm it termed “historic.”

Duluth officials asked the public to be patient as plows clear roadways and recommended that drivers stay off the roads to prevent accidents and let officers respond more quickly to emergencies.

Farther south, rain and thunderstorms were forecast along and ahead of the cold front, with heavy rainfall possible Saturday in parts of the Tennessee and Ohio Valleys.

Forecasters said a new storm is expected to bring California several feet of mountain snow, rain and gusty winds through the weekend. Another system is forecast to develop in the mid-Atlantic Sunday, moving as a nor’easter into Monday.

Airlines at O’Hare International and Midway International in Chicago reported average delays of 15 minutes as a winter storm headed toward the Midwest with heavy snow and ice and gusty winds.

The companies said they had canceled 27 flights at O’Hare and two at Midway as people scramble to get home on the year’s busiest travel weekend.

At Denver International Airport, there were 100 flights canceled Saturday because of high winds.

“Tomorrow, the airlines anticipate to be the busiest travel day of the Thanksgiving period at both O’Hare and Midway,” said Karen Pride, a spokeswoman for the Chicago Department of Aviation. “Everybody thinks the day before Thanksgiving is the busiest; it is not.”

Authorities in the western states were still grappling Saturday with the aftermath of heavy rains and snow over the busiest travel weekend of the year.

In Arizona, officials initially the found body of the 5-year-old about 3 miles downstream from where the vehicle they were riding in was swept away Friday, said Gila County sheriff’s Lt. Virgil Dodd. The second of the three children turned up later Saturday. The sheriff’s office didn’t provide the age and gender of the second child or the third child who was still missing late Saturday afternoon.

The agency said Saturday two other children and two adults who were in the vehicle were rescued from a small island and the bank of the creek in Tonto National Forest northeast of Phoenix. Sheriff’s officials initially had said six people, including four children, were rescued Friday at locations along the creek.

Families in California took advantage of the early season snow in the Grapevine area, sledding down slopes in Frazier Park, California. Traffic was heavy, but Interstate 5 was open in both directions as holiday travelers headed home.

High winds and ice were making travel almost impossible in some other places, however.

A 100-mile section of Interstate 80 in Nebraska and Wyoming closed Saturday morning because of high winds and blowing snow. Several other roads and highways also were closed.

Back-to-back snowstorms and strong winds combined to seriously complicate travel by land across much of the rest of Wyoming, where roads were closed in the eastern and southern parts of the state because of whiteout conditions.

The National Weather Service in Wyoming reported 4 inches of snow fell in Cheyenne from 7 p.m. Friday through 10 a.m. Saturday “that has been blown all over kingdom come by our winds,” said meteorologist Andrew Lyons.

That was added to a foot of snow that fell before Thanksgiving.

Wind gusts up to 50 mph created ground blizzards and below-zero wind chill temperatures in some areas. A wind gust of 77 mph was reported in the mountains between Cheyenne and Laramie, Lyons said.

All roads in and out of Casper were closed Saturday morning, including the entire 300-mile stretch of Interstate 25 in Wyoming.

Travel was also difficult in Colorado Saturday as winds blew around snow that fell in previous days.

Northeastern Colorado roads were closed due to strong winds, blowing and drifting snow and poor visibility.

In northern Montana, more than a foot of fresh snow and strong wind gusts are expected to combine to create ground blizzard conditions along the Rocky Mountain front.

Meteorologist Christian Cassel told the Great Falls Tribune people could be stuck in their homes for at least a day due to the near zero visibility.