Steubenville Council gets a look at budget 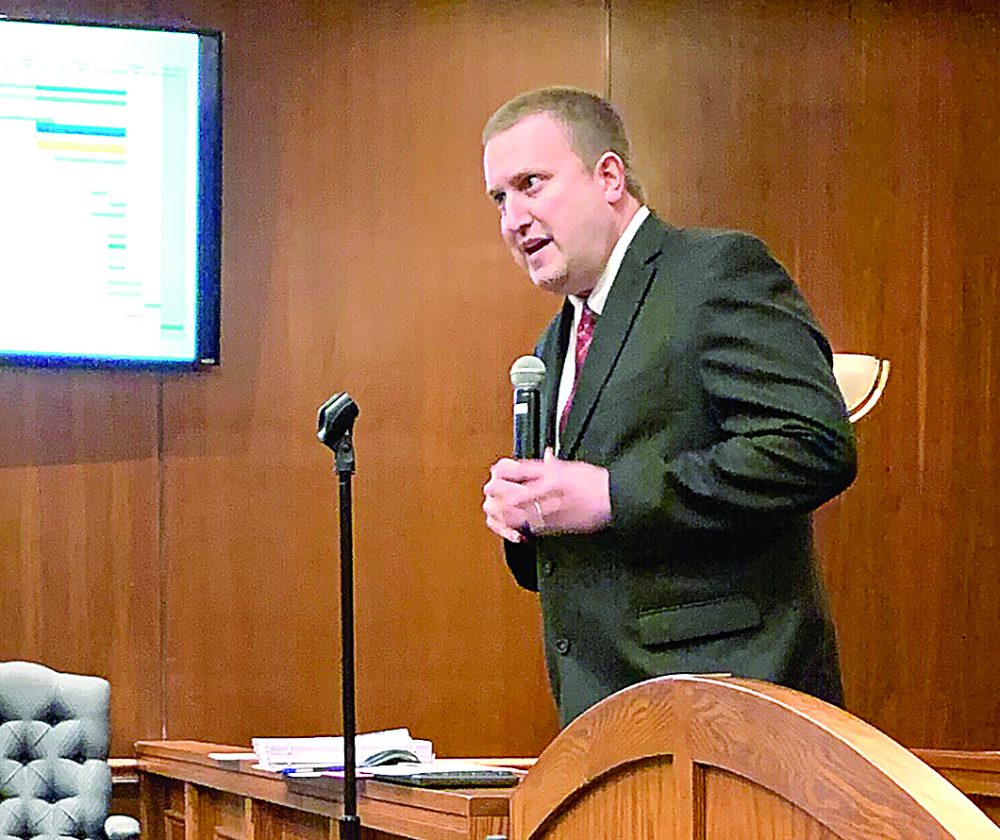 STEUBENVILLE — City Council got its first look Tuesday at the proposed 2020 budget, a $44.7 million spending plan Finance Director Dave Lewis said they managed to balance “without the use of carryover funds from the previous year.”

“We’ve got the city stable,” Lewis said during a 90-minute-plus finance committee meeting which preceded this week’s regular council meeting. “Our projections are it will be stable for the next five years — that’s the general fund, water fund and sewer funds.”

Lewis told council the city is looking at a $40,000 cash surplus in the general fund, but that’s only because of the one-time, $300,000 budget hit they’ll take because of the extra pay period in 2020.

Other highlights of the budget presentation:

¯ The city will increase its contribution to the Jefferson County Port Authority to $40,000 in 2020. That’s up $15,000 from the $25,000 allotted for the port’s economic development activities in the current budget.

¯ A $140,000 earmark to begin work on the old city building, which still houses Steubenville Municipal Court. Council plans to turn the part of the building not used by the court into a public market, similar to Wheeling’s Centre Market. The initial funding would be used to repair the roof, which is leaking.

¯ Funding to pay a program director and hire two additional full-time maintenance workers in the Parks and Recreation Department. Half the cost of the program director position would be covered by a grant.

The meeting wasn’t without tension, however, with 2nd Ward Councilman Craig Petrella taking umbrage at the budget being introduced as emergency legislation. While he’d agreed in 2018 to pass the budget as emergency legislation, he’d vowed it would be the last time, saying that “next year, this stuff coming in and trying to rush (it) through this council, without this council having time to deliberate on it … this one councilman will not tolerate it.”

Petrella said he’d been told the budget was essentially done a month ago, and wanted to know why the finance staff had waited until mid-December to bring the information to council.

“They could have gone with the numbers at the end of October and assumed those numbers were close to being correct,” 4th Ward Councilman Scott Dressel said. “The benefit of waiting … is that we don’t jump the gun and vote on a budget a month ahead of time (with numbers) that aren’t close to the actual resources available.”

Lewis said the city is required by state code to have a budget in place by Jan. 1. While a temporary budget is allowed, he said the city’s audit team recommended against it — saying the finance staff had done a good job of examining accounts and analyzing information, and suggesting for them to pass a temporary budget “would just be kicking the can down the road.”

Lewis pointed out that his staff needs “to have final numbers to calculate the city’s available resources,” adding that having a handle on that information is what allowed his staff to present council with a balanced budget. He said they didn’t have crucial information until last week.

“We have to hold off passage so we can get you the most accurate numbers — that’s what led to us balancing this budget,” Lewis said, later telling council, “I know it’s a lot for you guys to absorb.”

Paul said the budget document “is trying to be lean (but) still look forward.”

“Each and every one of us has our own opinion,” Petrella told council later in the evening. “I want to make mine clear: I received this less than 24 hours ago, I’ve probably had less than two hours to review it.”

Petrella voiced concern about what he calls “roadblocks” facing the city, including contract negotiations, unfilled vacancies in city departments, the recreation department hires and what he sees as a need for a “multi-functional work force” and said passing the budget as an emergency was a mistake.

“A temporary budget is still legal — any budget we pass can always be amended,” Petrella reminded council, adding, “We can always agree to disagree.”

Paul sunshined seven budget-related ordinances for the Dec. 17 meeting, two of them closing out the 2019 budget year and the other five addressing the 2020 spending plan — adopting a revenue tax budget, making appropriations for expenditures, adopting a capital improvement plan, amending the table of organization and adopting the indirect cost allocation plan for the city in 2020.

“And, if someone has a problem with it and you want to go through three readings, we can meet (Christmas Eve and New Year’s Eve) and go through the process,” Paul said.

City Manager Jim Mavromatis, meanwhile, pointed out the $140,000 penciled into the 2020 budget for the old city building isn’t going to be anywhere near what they’ll need to do the renovations to turn it into a public market.

“This ($140,000) will only cover the roof at best, not the whole market,” Mavromatis said. “We’ll apply for some grants (for additional funding) because of its historic nature.”

Petrella pointed to water-stained ceiling tiles in council chambers and said he wanted “to be sure there’s some money in here to start the project.”

“There will be additional funds we can go for if needed,” Mavromatis replied. “My concern is to get the roof started, as soon as possible.”

Councilwoman at large Kimberly Hahn pointed out there was no budget earmark for bridge repairs at Beatty Park.

The bridge has been closed since July because sandstone blocks underpinning the 134-year-old structure have weathered and fallen away. It’s the only way for vehicles to access the upper shelter at Beatty Park, which caught fire during a cold snap earlier this year. Firefighters believe that fire originated when someone had started a fire in a barrel to stay warm.

“If we’d done something with it a couple of years ago, we wouldn’t be looking at the damage we have now,” Hahn said.

Sixth Ward Councilman Bob Villamagna has championed the market building project, saying the leaking roof is “deplorable, it really is. The water, the roof leaking, is causing tiles to file.”

‘But if we lose that bridge we’re going to lose a quarter of the park,” Villamagna said. “I know we have a lot of projects going on, and we’re trying to find a little (money) for each. But I don’t want to forget the bridge.”

Repairs to the Beatty shelter’s roof, covered by insurance, are on hold until council decides if and when the bridge can be repaired.