House, Senate leaders give sneak peek at legislative priorities for 2020 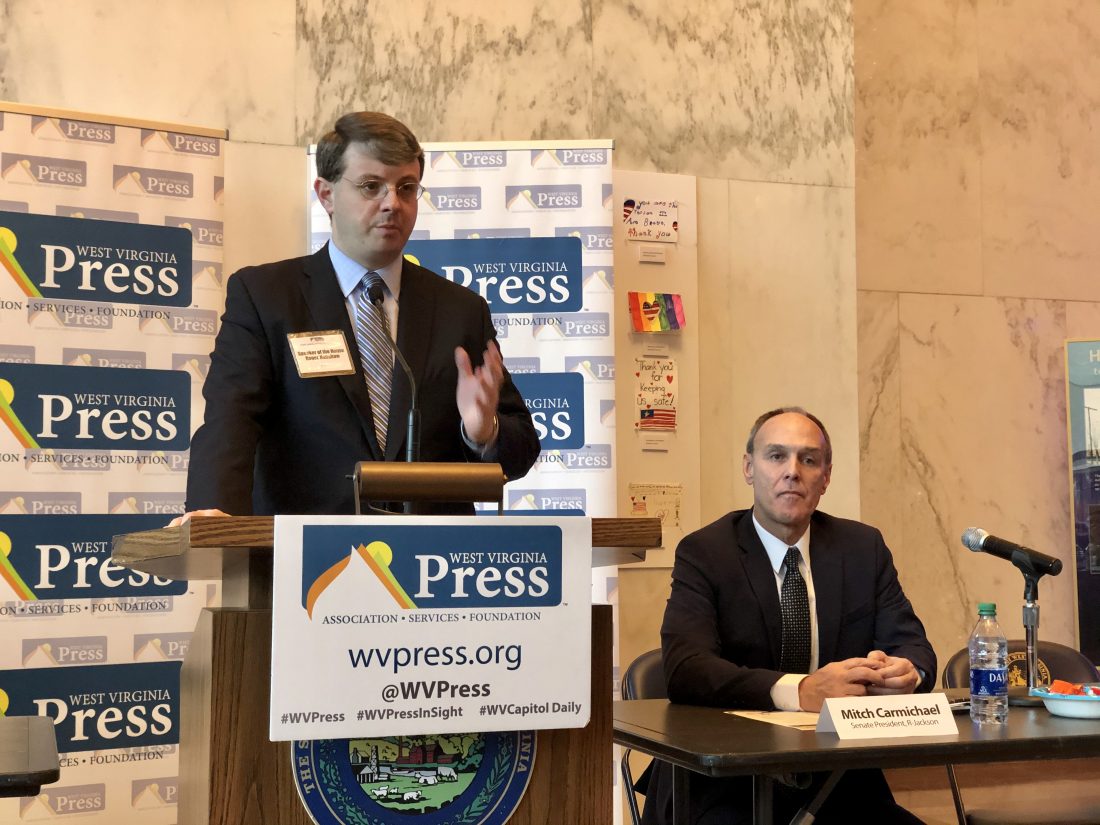 CHARLESTON — Top legislative leaders told members of the media Friday what they plan to focus on during the 2020 legislative session starting this week.

Carmichael, who first became Senate president in 2017, said the state has come a long way since Republicans became the majority in the House and Senate in 2014, leading to a string of growth in the gross domestic product, the best personal income growth in the nation, unemployment levels that returned to pre-Great Recession levels, and surplus tax revenue last year.

“The change that is occurring in our state is invigorating,” Carmichael said. “It’s inspirational and it’s making a real difference in the lives and the outcomes of the people of this state. It feels great to be a part of that time and this resurgence of West Virginia.”

High on Carmichael’s wish list is passing a joint resolution to phase out the $100 million business and inventory tax by $25 million over four years. The resolution would require a two-thirds vote of both chambers, as a well as a vote by the people in a special election.

The tax helps fund county governments and school systems. Carmichael believes they can replace the lost revenue with money from the general revenue budget, as well as new revenue from new investment from business growth.

“We want to be the Legislature that gets rid of it and creates the manufacturing jobs and opportunities for our state to continue to grow in those areas,” Carmichael said.

Carmichael said another attempt to create an intermediate appeals court would come out of the Senate. A similar bill passed the Senate 17-16 during the 2019 legislative session but didn’t come out of the House. The West Virginia Supreme Court of Appeals provides a written decision for every appeal, but an intermediate court would hear appeals from the circuit courts before moving to the Supreme Court.

Carmichael spoke about the success of Senate Bill 1 that was passed last year, creating the West Virginia Invests grant program. Invests helps cover tuition and fees for certain two-year college programs after federal aid has been exhausted. Carmichael said 2,367 people are in the Invests program learning new trades and disciplines. Hanshaw, who supported SB 1, said the next step is helping West Virginians who might not have access to the program.

One way, Hanshaw said, is to change state laws that prevent some two- and four-year colleges and universities from offering similar programs to other schools.

“The scope of opportunity that institutions are able to provide to our citizens right now, our law doesn’t provide that,” Hanshaw said. “Our law restricts the programs that institutions of higher education can offer. We have an interest in evaluating whether that’s still appropriate.”

Hanshaw said another barrier for entry into the workforce for some involves the state’s many occupational licensing programs. According to a study by the conservative Cardinal Institute for West Virginia Policy, West Virginia’s licensing fees are higher than Pennsylvania and Ohio for many occupations, with a total of 38 licensing boards. Some occupations requiring licenses include barbers and nail technicians.

“West Virginia is considered to be the 44th most regulated environment for regulated occupations, and by regulated occupations, I mean the number of things for which one needs a license,” Hanshaw said. “We’re actively engaged now and asking, which if any of those regulatory regulated professions should go away. For which of those professions should West Virginia simply be able to hold out a shingle and begin offering their services in the communities.”

Other goals for Carmichael and Hanshaw include additional criminal justice reform, including reform of the bond process to help counties with large regional jail bills. Further reform of the state’s exploding foster care system will be worked on, as well broadband expansion legislation. Legislation creating a State Resiliency Office to prepare and manage disasters in the state is also in the works.