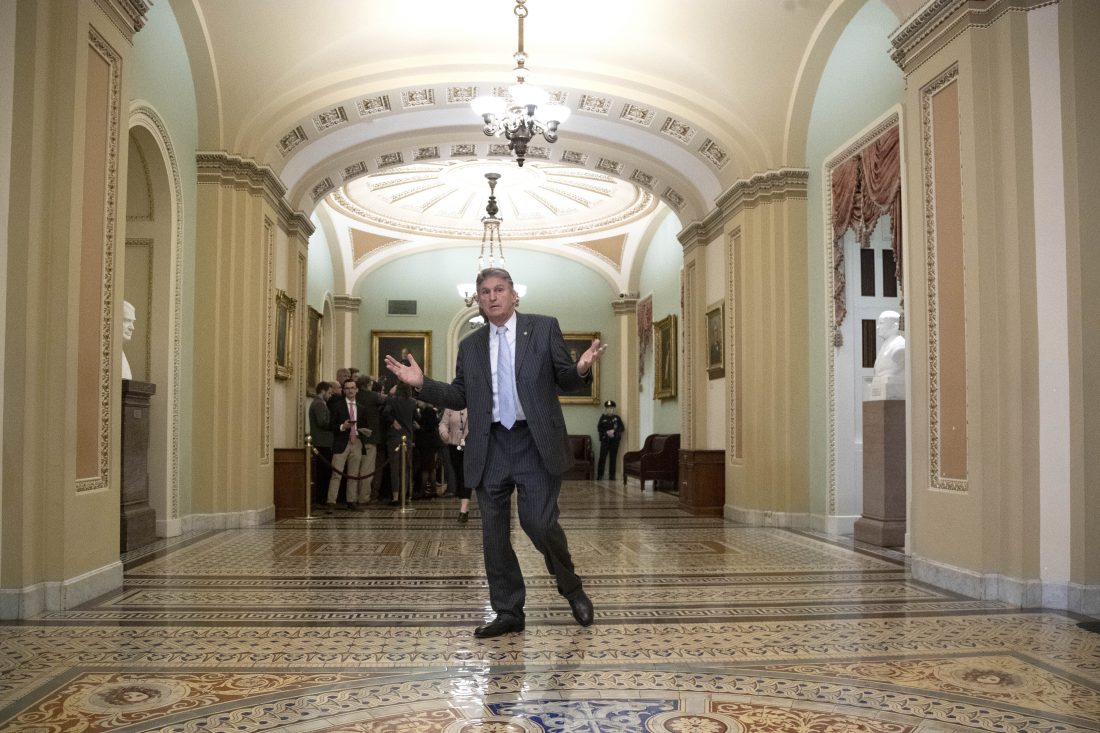 Sen. Joe Manchin, D-W.Va., reacts while talking to a member of his staff outside the Senate chamber at the Capitol in Washington during a break in the impeachment trial of President Donald Trump on charges of abuse of power and obstruction of Congress, Friday, Jan. 24, 2020. (AP Photo/Julio Cortez)

CHARLESTON — Sen. Joe Manchin, D-W.Va., Friday, said he has never before been a juror in a trial, but now sits as one of 100 jurors in the third impeachment trial in U.S. history, the trial of President Donald Trump.

“I have never been called for jury duty, so this is a truly unique opportunity for me to see and appreciate the process that I can only imagine that people go through when they are on jury duty and have more appreciation for the judicial system and the judges that sit there impartially and listen to all the different evidence brought forward,” Manchin said. “It’s quite an educational experience, but also it’s extremely serious.”

Manchin, speaking by phone Friday from Washington, D.C., said senators have heard impeachment managers from the House of Representatives make the case for Trump’s removal from office, but still need to hear from witnesses, such as White House Chief of Staff Mick Mulvaney and former National Security Adviser John Bolton.

Mulvaney and Bolton have direct knowledge of a phone call between Trump and Ukrainian President Volodymyr Zelensky where Trump allegedly held up military aid to the Ukraine in exchange for Ukrainian prosecutors announcing an investigation into former vice president and Democratic presidential candidate Joe Biden and his son Hunter, who was employed by a Ukrainian energy company, Manchin said.

“We should have additional witnesses and evidence,” Manchin said. “These are witnesses who had first-hand knowledge that had been identified as Mick Mulvaney and John Bolton…and to bring evidence that’s been redacted, documents that we have not been able to see that have been blacked out. That’s even more reasons for us to be able to have the detailed evidence and first-hand witnesses that will be able to make an informed impartial decision.”

Trump was impeached in December by the U.S. House of Representatives for abuse of office for the alleged pressure on the Ukraine, and contempt of Congress for using executive privilege to prevent current and former White House officials from testifying and refusing to turn over requested documents.

It takes a two-thirds vote, 67 senators, to vote for removal of the president. With Republicans holding 53 seats in the Senate, some believe the only outcome will be acquittal. According to the MetroNews West Virginia Poll, 59 percent of West Virginians oppose Trump’s impeachment and removal from office. Despite the high level of support, Manchin said it’s important to listen to all the evidence presented before making a decision.

“I took an oath to be an impartial juror throughout this trial, and I take that extremely seriously,” Manchin said.

“West Virginians, we believe in fairness, but we also believe in our constitution and holding people accountable for actions,” Manchin said. “This is not whether you like the president or don’t like President Trump, and it’s not whether you’re a Democrat or Republican or independent. It’s about the rule of law and how we govern ourselves. Due process is afforded to every person who’s been charged any way, shape or form. They’re innocent until proven guilty, but also we know no one’s above the law.”

Manchin also raised concerns about the actions of Rudy Giuliani, former New York City mayor and Trump’s personal attorney who is alleged to have privately met with Ukrainian officials on Trump’s behalf to pressure them to investigate Biden. Two associates of Giuliani, Lev Parnas and Igor Fruman, are alleged to have monitored the movements of former U.S. Ambassador to the Ukraine Marie Yovanovitch, who was fired by Trump.

“There should not be a rogue agent such as Rudy Giuliani saying ‘I’m working strictly for the president and I have more power and I have more of his ear to set policies of what we’re going to do for in foreign countries than the experts that we have in the State Department and our military advisers,'” Manchin said. “That’s just wrong.”

Parnas and another individual are facing campaign finance charges for donating to several political action committees, including one that supported state Attorney General Patrick Morrisey’s 2018 campaign for U.S. Senate against Manchin.