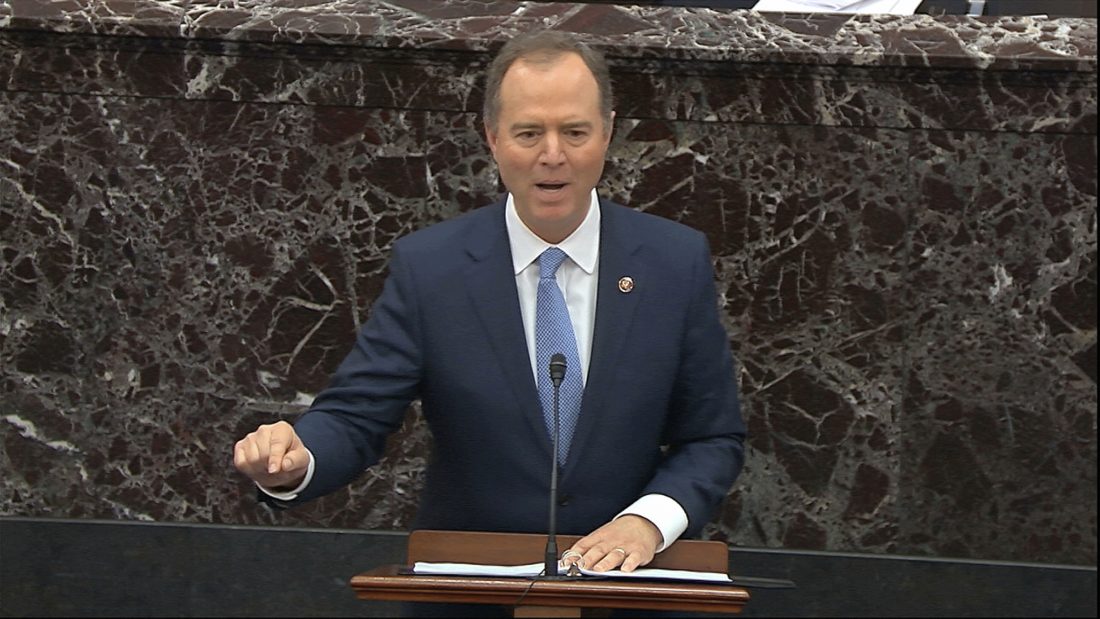 In this image from video, House impeachment manager Rep. Adam Schiff, D-Calif., speaks during the impeachment trial against President Donald Trump in the Senate at the U.S. Capitol in Washington, Friday, Jan. 24, 2020. (Senate Television via AP)

WASHINGTON — Closing out their case, House Democrats warned Friday in Donald Trump’s impeachment trial that the president will persist in abusing his power and endangering American democracy unless Congress intervenes to remove him before the 2020 election.

“He is who he is,” declared Rep. Adam Schiff, the chairman of the House Intelligence Committee. He told the senators listening as jurors that Trump put the U.S-Ukraine relationship on the line in a way that benefited Russia just so he could take a political “cheap shot” at Democratic foe Joe Biden.

The Democratic prosecutors ended their presentation just before 9 p.m. EST, with Schiff in the well of the Senate making one final plea to senators to ensure witnesses are called to testify.

“Give America a fair trial,” Schiff said. “She’s worth it.”

Trump is being tried in the Senate after the House impeached him last month, accusing him of abusing his office by asking Ukraine for politically motivated probes of Biden and other matters while withholding military aid from a U.S. ally that was at war with bordering Russia. A second article of impeachment accuses him of obstructing Congress by refusing to turn over documents or allow officials to testify in the House ensuing probe.

As Democrats finished their third day before skeptical Republican senators, Trump’s legal team prepared to start his defense, expected on Saturday. Trump, eyes on the audience beyond the Senate chamber, bemoaned the schedule in a tweet, saying “looks like my lawyers will be forced to start on Saturday, which is called Death Valley in T.V.”

Republicans are defending Trump’s actions as appropriate and are casting the impeachment trial as a politically motivated effort to weaken him in his re-election campaign. Republicans hold a 53-47 majority in the Senate, and eventual acquittal is considered likely.

Before that, senators will make a critical decision next week on Democratic demands to hear testimony from top Trump aides, including acting chief of staff Mick Mulvaney and former national security adviser John Bolton who refused to appear before the House. It would take four Republican senators to join the Democratic minority to seek witnesses, and so far the numbers appear lacking.

With Chief Justice John Roberts presiding, Friday’s session opened with a sweeping and impassioned argument from Democrats that Trump’s actions with Ukraine were not unique but part of a pattern of “destructive behavior” now threatening the core foundations of American democracy.

Schiff told the senators that Trump has shown repeatedly that he is willing to put his personal political interests above those of the country he is sworn to protect.

The evidence shows, he said, that Trump bucked the advice of his own national security apparatus to chase “kooky” theories about Ukraine pushed by lawyer Rudy Giuliani, resulting in “one hell of a Russian intelligence coup” that benefited Vladimir Putin at U.S. expense.

This was not simply a foreign policy dispute, Schiff argued, but a breech of long-held American values for Trump to leverage an ally — in this case Ukraine, a struggling democracy facing down Russian troops — for the investigations he wanted ahead of 2020.

When the House started investigating his actions, Democrats said, Trump blatantly obstructed the probe. Even then-President Richard Nixon, they argued, better understood the need to comply with Congress in some of its oversight requests.

Schiff said that left unchecked Trump, who insists he did nothing wrong, would seek foreign election interference again.

Drawing on historical figures, from the Founding Fathers to the late GOP Sen. John McCain and the fictional Atticus Finch, Schiff made his arguments emphatically personal.

“The next time, it just may be you,” he said, pointing at one senator after another. “Do you think for a moment that if he felt it was in his interest, he wouldn’t ask you to be investigated?”

The senators though, appear as deeply divided as the nation, with Democrats ready to vote to convict the president and Republicans poised to acquit.

The impeachment trial is set against the backdrop of the 2020 election, as voters assess Trump’s presidency and his run for a second term. Four senators who are Democratic presidential candidates are off the campaign trail, seated as jurors.

A new poll from The Associated Press-NORC Center for Public Affairs Research showed the public slightly more likely to say the Senate should convict and remove Trump from office than to say it should not, 45% to 40%. But a sizable percentage, 14%, said they didn’t know enough to have an opinion.

One issue with wide agreement: Trump should allow top aides to appear as witnesses at the trial. About 7 in 10 respondents said so, including majorities of Republicans and Democrats, according to the poll.

Trump is the third president in American history to face an impeachment trial. Neither Andrew Johnson in 1868 nor Bill Clinton in 1999 was removed by the Senate. Nixon left office before a House vote that was likely to impeach him.

The House mounted its Trump case after a government whistleblower complained about his July 2019 call with Ukraine. The House relied on testimony from current and former national security officials and diplomats, many who defied White House instructions not to appear.

Evidence presented in the House probe has shown that Trump, with Giuliani, pursued investigations of Biden and his son, Hunter, who served on a Ukrainian gas company’s board, and sought a probe of a debunked theory that Ukraine interfered in the 2016 U.S. election.

It’s a story line many in the president’s camp are still pushing. Giuliani, in an appearance Friday on “Fox & Friends,” insisted he would present evidence on his new podcast.